Daegu`s public health director Kim Jae-dong (Daegu Office)
Daegu, once the epicenter of South Korea’s coronavirus epidemic, is faring better than most parts of the country in the midst of a coronavirus resurgence.

For the whole month of November, as a third big wave of the coronavirus began to sweep across the country, Daegu managed to maintain a single-digit rise in daily new infections. No new cases were found for six November days. When the nationwide tally shot up to 569 cases Friday, Daegu was the only region in Korea to report zero cases.

But Daegu is not letting down its guard and is staying vigilant, Kim Jae-dong, 58, the city’s public health director, told The Korea Herald in a phone interview.

“We want to make sure that we build on the lessons learned earlier this year to anticipate and prepare for what’s to come,” he said.

After reaching the peak of the outbreak, Daegu counted only 524 local cases between May and November. Nearly 60 percent of the city’s total cases are linked to the Shincheonji Church, which remains to date Korea’s largest cluster of infections.

Kim said one of the first things the city did as the infection rate subsided was to prepare for the next surge. “There is going to be another wave, experts warned us just as we thought the worst was over,” he said. “We were determined not to let this happen a second time.”

He said the city has planned for a scenario of infections rising beyond twice the levels seen in February and March.

The worst-case preparations involve expanding testing and health care capacity. Daegu is equipped to test over 6,100 people a day, and has room to house up to 1,200 patients at hospitals, in addition to the 2,700 beds at nonhospital facilities for patients with mild or no symptoms.

While hospitals elsewhere in the country are straining under a steep influx of patients, only 35 coronavirus beds in Daegu were filled as of Monday. With beds to spare, Daegu is now taking in patients from other cities and provinces experiencing active outbreaks.

Some 20 patients arrived from Busan and 40 others came from North and South Gyeongsang provinces on Monday, Kim said, as well as an intensive care patient from South Jeolla Province. 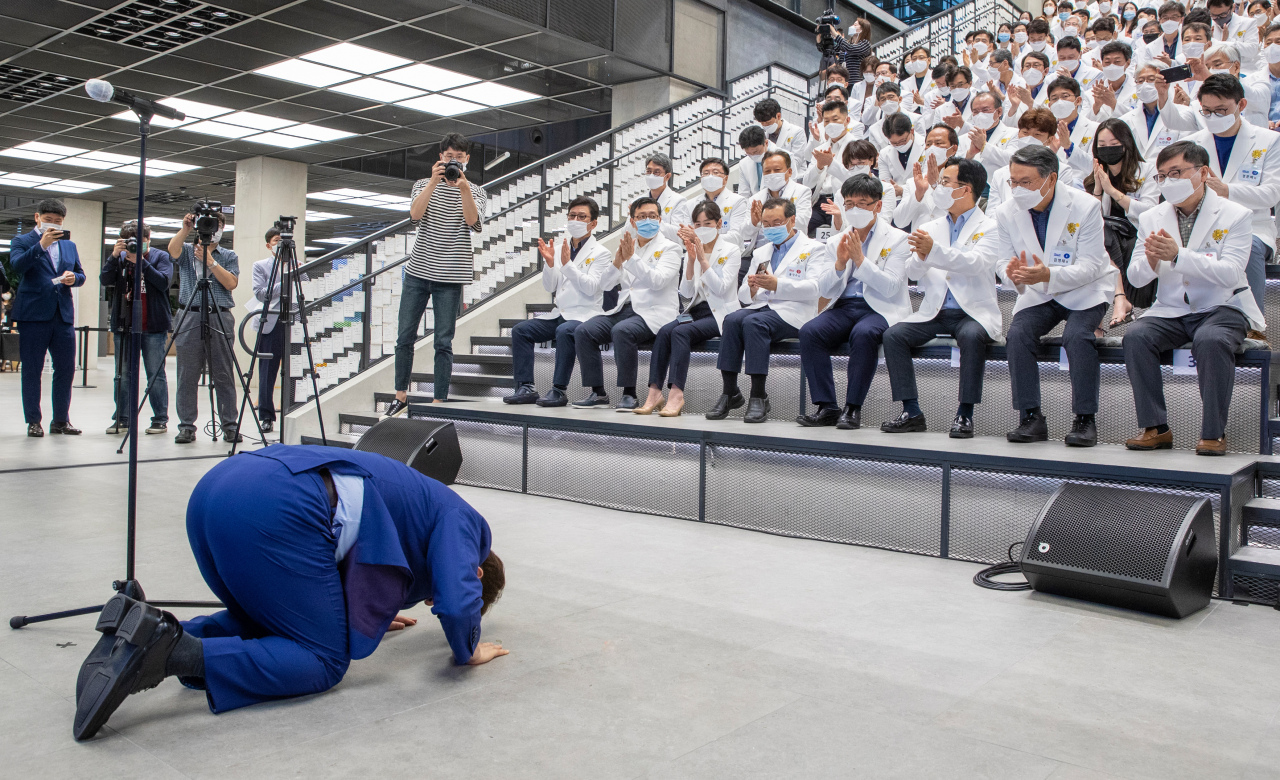 Daegu Mayor Kwon Young-jin honors doctors who volunteered to help the city at a Seoul venue in July. (Daegu Office)
“We are more than happy to accommodate them and return the help Daegu received when it was the epicenter of Korea’s epidemic,” he said.

In spring, about 2,080 health care workers from around the country traveled to Daegu to help. Protective equipment and other donations came in from over 1,200 groups and individuals.

Kim said experts were always present at Daegu’s office at the time as the city coordinated its response. Over the past year, the city officials have held over 40 meetings with experts, the most recent of which was held last week.

“Health experts came in as early as seven in the morning and stayed almost until midnight, to work with the mayor and the rest of the city office to turn around this calamity,” he said.

“We’re deeply indebted to all the health care workers who rushed to our city in time of need when very little was known about the new pathogen.”

He said his team of 60 staffers at the city’s public health division barely had days off all year long. “A lot of the field work -- such as inspecting risky places -- is done in the late hours. All of our staffers have been working round the clock since the beginning."

Kim also cited cooperation from the public as the quintessential factor in Daegu’s recovery.

“I think we have very high levels of compliance with safety rules, partly because the wounds are still fresh for so many here,” he said. “People wouldn’t take their masks off even in the steaming heat of summer.”

“None of this would be possible without each one of us doing our part to slow the spread.”