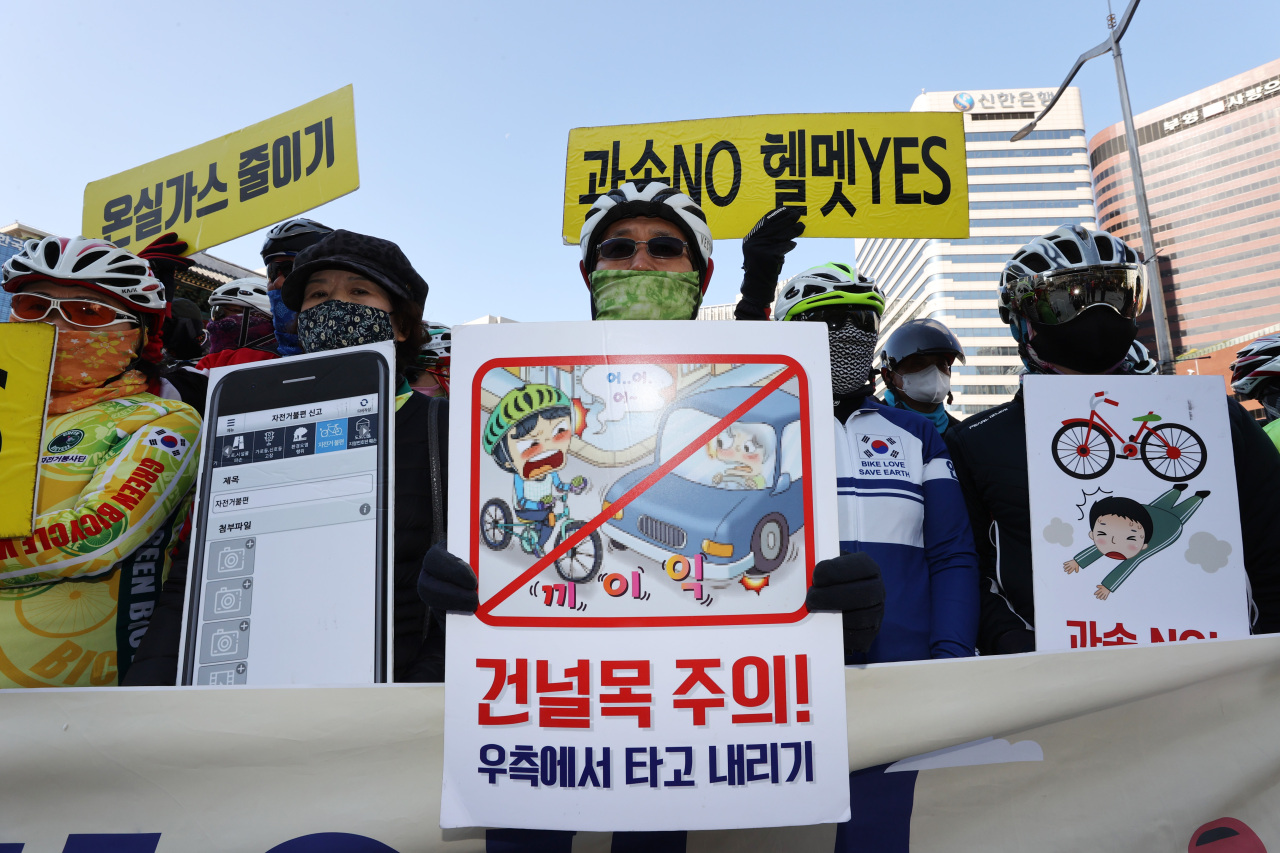 Civic groups hold a press conference in Seoul on Nov. 9, urging the government to come up with safety measures for allowing electric scooters to be ridden on cycling paths. (Yonhap)
Safety concerns are mounting ahead of the implementation of relaxed rules that will enable teenagers to ride electric scooters without a license, among other changes, amid a growing number of accidents caused by the popular new mobility option.

Under the current Road Traffic Act, electric scooter riders must be at least 16 years old and have a motorcycle license. When the revised law takes effect Dec. 10, those aged 13 and older will be allowed to ride e-scooters on cycling paths, with no penalty for not wearing a helmet.

The speed limit of 25 kilometers per hour is the only restriction that operators will have to comply with.

The revision is intended to support the “safe operation of personal mobility devices” and “contribute to vitalization of the smart mobility industry,” said the Ministry of the Interior and Safety.

But experts and some members of the public say the revision is prioritizing traffic convenience over safety, without considering factors that could lead to confusion and disruption among riders, nonriders and service providers.

Park Mu-hyeok, a professor at the Korea Road Traffic Authority, said the revision missed out on three key elements that contribute to safety on the road: expansion of infrastructure, strengthening of road traffic enforcement and education.

“A stronger rule than just recommendations should be applied to sellers and lenders of e-scooters to obligate them to inform riders on the rules of the road and park and riding skills,” he said.

Thanks to their affordability and convenience for traveling short distances, the number of shared e-scooters in Seoul has soared from 150 in 2018 to 35,800 as of August this year.

The phenomenon has resulted in a spike in injuries -- from 49 cases in 2016 to 890 cases last year, according to the Samsung Traffic Safety Research Institute.

“I will be afraid to drive in school zones if more teen riders take to the streets. I don’t feel safe in the streets after seeing someone being hurt in an e-scooter accident near my home. The amended law only amplifies fear. It should be revised again,” said a 32-year-old office worker surnamed Lee, who lives in Seoul’s Mapo-gu.

Lee tried to ride a shared e-scooter once out of curiosity, but found it hard to handle when he encountered bumps and uneven road surfaces. “I wonder how much attention young students could pay while riding and how skilled they are to prevent potential accidents,” he said.

Having cycling paths opened up to e-scooter users looks like a safer option because they were previously only permitted to use the device on roads alongside traffic.

However, as 70 percent of the country’s cycling paths are shared by cyclists and pedestrians, the new rules increase the chances of a collision.

“Cycling roads account for less than 20 percent of the country’s total roads. There are many rural areas that don’t even have cycling roads. The country should have expanded bike paths before making such a decision,” professor Park said.

Municipal governments are scurrying to join hands with e-scooter rental companies to roll out education campaigns to promote safe riding in their jurisdictions.

Partnering with the Seoul Metropolitan Government, Beam Mobility decided to limit the top speed for all its devices to 18 kilometers per hour during what it calls the “safe driving time” between 11 p.m. and 5 a.m.

Seoul is pushing to revise related laws to designate the far-right lanes of three-lane-plus roads exclusively for private mobility devices.

To prevent e-scooters from becoming scattered around the city, it restricts on-street parking to 14 types of areas with pedestrian activity, including spots near crosswalks and trails.

Lime Korea signed a business agreement with the Korea Road Traffic Authority and the Green Consumer Network in Korea to run an education program to help its customers improve their riding skills. The firm also decided to keep its age limit at 16 after the new law comes into force next month.

Rep. Park Seong-min of the main opposition People Power Party proposed a bill on Nov. 16 to revert to the old version of the Road Traffic Act, which requires riders to be over 16 and licensed.

His bill contains provisions that could force riders to wear helmets and prohibit two people from riding a single e-scooter.

“The people’s lives and safety should be our top priority. Laws and systems should be prepared meticulously so that all road users can use them safely and conveniently,” Park said.