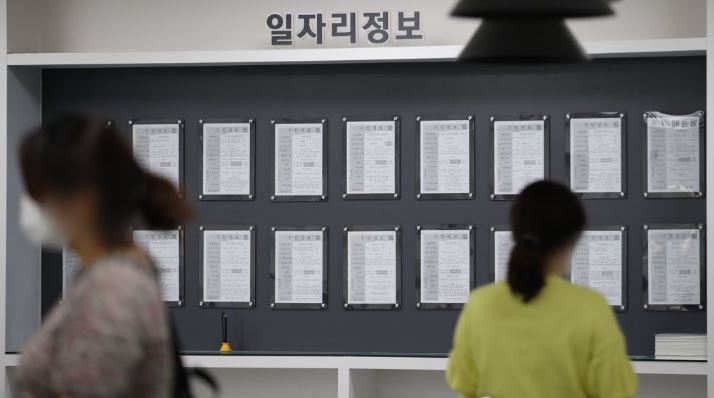 A bulletin board for recruitment by businesses is seen at a location in Seoul earlier this year amid restrictions on large-scale, on-the-spot job fairs due to COVID-19. (Yonhap)
SEJONG -- South Korea saw its number of people aged 15 or over who have abandoned looking for jobs increase sharply over the past three years, data from a government agency showed.

The data also suggested that women far outstripped men in this category during the first 41 months of President Moon Jae-in’s 60-month term.

According to figures held by Statistics Korea, the number of discouraged workers was 498,000 in May 2017, when the Moon administration took office.

The tally counts people who had looked unsuccessfully for a job in the previous year but not in the month immediately preceding the survey. 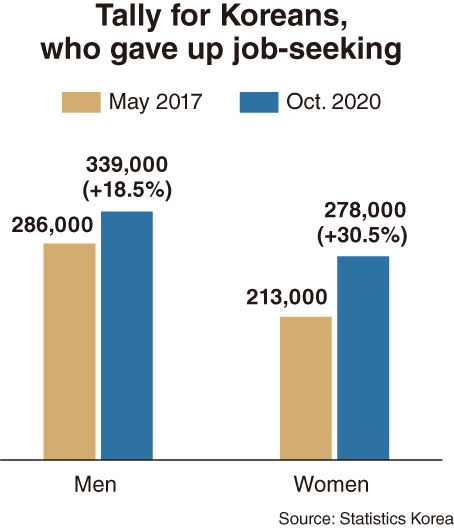 The 2020 situation has been much affected by the novel coronavirus. Nevertheless, similar state figures on employment or unemployment for the past three years indicate that there was little apparent improvement in the hiring index, despite a series of extra budget allocations and cash support for young job seekers.

In May 2017, when President Moon pledged to actively increase jobs for the young generation particularly, the de facto jobless rate among those aged between 15-29 was 22.9 percent, according to the Supplementary Index III for Employment compiled by Statistics Korea.

Index III provides a relatively new method of calculating unemployment, counting underemployed people among the de facto unemployed. This category, also called “extended-based” jobless, includes those who work fewer than 36 hours a week and want to work more, as well as seasonal workers who are out of work for part of the year.

This indicates that 1.16 million of the 4.77 economically active people aged 15-29 were unemployed or underemployed as of last month.

According to the Korea Employment Information Service, the number of recipients of unemployment payouts among those 20-29 came to 105,496 in September. This posted a 97.6 percent surge from 53,369, posted in May 2017.

Over the corresponding period, total monthly benefits paid to people in their 20s increased from 62.7 billion won ($56.1 million) to 169.3 billion won.