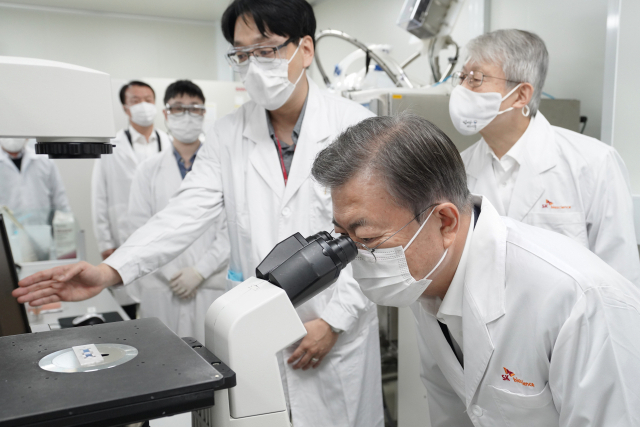 Phase 3 clinical trial results are anticipated to be released around Christmas, the researchers said Friday.

SK Bioscience, the Korean vaccine producer who in July signed with AstraZeneca to manufacture its COVID-19 vaccine, confirmed with The Korea Herald on Friday that manufacturing has been going without a glitch.

AZD1222, as a viral vector vaccine for COVID-19, can be stored and distributed at temperature ranging from 2-8 degrees Celsius, which is the regular refrigeration temperature, an AstraZeneca Korea official told The Korea Herald.

The company is in discussions with the Korean government regarding a possible domestic distribution of the vaccine, she said.

In the beginning of the race for COVID-19 vaccine, AZD1222 was the first to enter phase 3 clinical trials of all the potential vaccines counted by the World Health Organization.

The phase 3 trial had been put on hold in September, however, after a “suspected adverse event” in a person administered with the drug was reported in the UK.

While the study promptly resumed in the UK, and subsequently in Brazil, South Africa and Japan, it took the US’ Food and Drug Administration until around the end of October to grant resumption of the phase 3 trial in the US.

Once the phase 3 trial results come out in late December, AstraZeneca is expected to apply for emergency use of the vaccine.

In global emergency situation like that of this COVID-19, it is customary for the Korean drug authorities to take the US FDA‘s review of a drug substance as sufficient for the Korean market, as well.

While the Health Ministry has yet to make a deal with any independent vaccine developers for COVID-19 vaccine, the fact that AZD1222 is contract-manufactured locally in Korea may act in favor for the government in striking a deal with AstraZeneca, industry insiders opined.