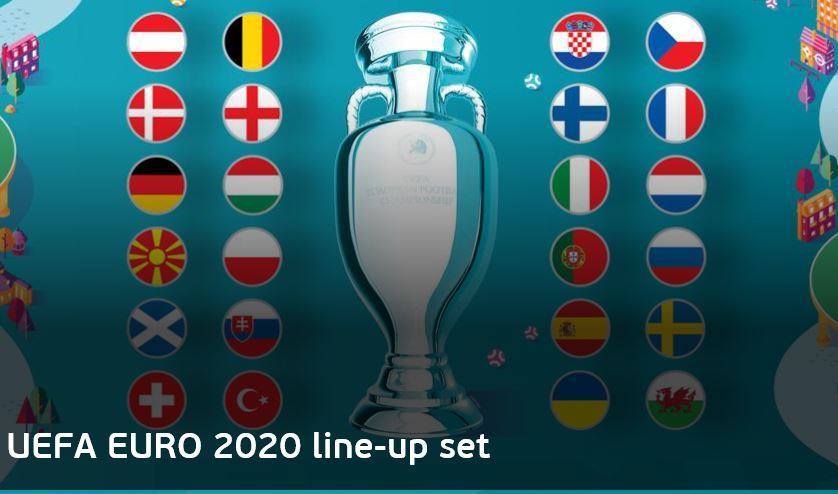 A capture of the UEFA Euro 2020 homepage that shows the flags of 24 contestants for the event, scheduled to be held in June-July 2021 (Union of European Football Associations)
SEJONG -- Alongside the Tokyo Summer Olympics, another big international sports event is slated for next summer: the Euro 2020.

Both events have been delayed by one year due to COVID-19.

Some Japanese are protesting for the withdrawal of the 32nd Summer Olympiad, citing pandemic risks, and the same is true of the Euros.

Since 1960, the past Euros were held in one or two-joint host countries every four years. But the Euro 2020 is scheduled to be held in 11 countries (12 cities) in celebration of its 60th anniversary. 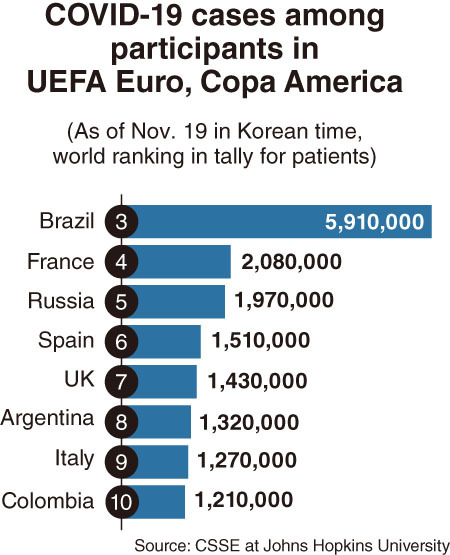 (Graphic by Kim Sun-young/The Korea Herald)
The 12 joint hosts are Italy and Azerbaijan (for the Group A preliminaries); Russia and Denmark (Group B); the Netherlands and Romania (Group C); Scotland an England (Group D); Spain and Ireland (Group E); and Germany and Hungary (Group F).

About seven months remain before the event is due to begin, but another upsurge in novel coronavirus infections in Europe is casting doubt on those plans.

In the English Premier League, whose games are underway, more than 60 COVID-19 confirmed cases have been reported among players and each football club employees.

According to the Center for Systems Science and Engineering at Johns Hopkins University, five of the 24 participants were in the world’s top 10 in terms of the number of COVID-19 cases as of Nov. 19.

France, which recently overtook Russia, posted 2.08 million cases, the fourth-largest number in the world. Russia was fifth with 1.97 million cases, Spain was sixth with 1.51 million, the UK at seventh with 1.43 million and Italy ninth with 1.27 million.

In total 18 participating nations outstripped the tally for Japan -- 123,000 -- which ranked 48th in the tally for pandemic cases.

A core issue is how UEFA organizers would control significant movements of fans across countries and even continents should the pandemic situation continue in the second quarter of 2021.

Likewise, the Copa America -- the soccer championship among South American countries -- has also been pushed back a year to June 11-July 11, 2021.

The joint hosts are nine cities in Argentina and Colombia, while 12 countries will compete in the preliminaries. Two recent Asian Cup champions -- Australia and Qatar (the host of 2022 FIFA World Cup finals) -- are also invited to make up the 12.

Brazil recorded 5.91 million COVID-19 cases as of Nov. 19, the third highest in the world. Argentina is the eighth highest with 1.32 million and Colombia is 10th with 1.21 million.