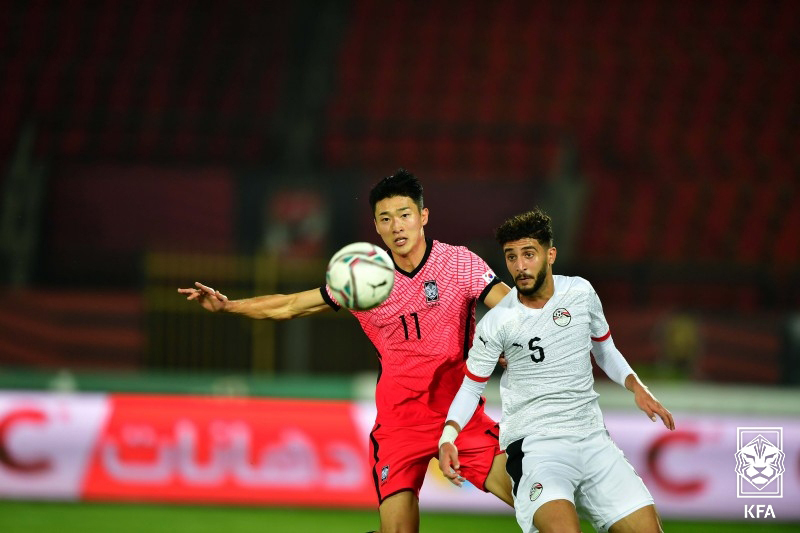 Cho Gue-sung of South Korea (L) battles Mohamed Abdel-Salam of Egypt for the ball during their under-23 men's football friendly match at Al Salam Stadium in Cairo on Thursday. (Korea Football Association)
Saved by their goalkeeper, South Korea ended up in a scoreless draw with Egypt to open a men's under-23 football friendly tournament in Cairo.

Goalkeeper Song Bum-keun stood on his head and made several stops at Al Salam Stadium in the Egyptian capital on Thursday (local time), while his teammates up front barely mounted any attack.

These are the first international matches for Kim's squad since January, when they won the Asian Olympic qualifying tournament.

With the Tokyo Olympics pushed back by a year due to the coronavirus pandemic, South Korea and other Olympic football teams have had virtually no international action for most of 2020.

Coach Kim has said he sees the trip to Egypt as his final opportunity to check on Europe-based youngsters in person and see if they'd be good enough to play in the Olympics.

The starting lineup on Thursday reflected that desire, as five of seven Europe-based players got the nod, including midfielders Lee Seung-woo of Sint-Truiden in Belgium, Paik Seung-ho of Darmstadt 98 in Germany, and Kim Jung-min of Vitoria S.C. in Spain.

South Korea gave up a scoring chance in the opening moments, and Song was engaged from the get-go.

In the 27th, Song turned aside a shot from Emam Ashour, and saw Mahmoud Marie's header following an ensuing corner miss the target.

A dozen minutes later, Son denied Salah Mohsen on a one-on-one opportunity from inside the box.

South Korean players, meanwhile, had trouble connecting on passes, and their defense began to show cracks as well. Most of the players from Europe have been getting little playing time with their clubs, and it showed for the national team.

Egypt kept their pressure on early in the second half. Ahmed Yasser Rayan hit the side of the net with a mid-range shot in the 54th, and Song came up with another huge save two minutes later.

Coach Kim made several substitutions but new players did little to spark the offense.

Kim said afterward the outcome didn't matter at all, as long as he had a chance to see some players for the first time in quite a while.

"I think we were wobbly on defense because these guys are playing together for the first time. We haven't had a lot of time to practice," Kim said. "Chemistry on defense isn't so important now. I am in the process of checking on individual players' progress."

He said he'd expected players from Europe to struggle because they weren't in optimal match shape.

Kim said it would have made life easier on his players if they'd had more time to overcome their jetlag and prepare for this competition but added, "Beggars can't be choosers."

"I hope our players will be more proactive in challenging situations like this," Kim said. "Some preposterous things could happen in the future, and they have to know how to handle adversity."

Lee Seung-woo, a former teen prodigy whose stock has fallen considerably in recent years, blamed the loss on fatigue and players' inability to pay attention to details.

"We're still trying to learn each other's tendencies," Lee said. "I am disappointed we didn't win. We'll try to do better against Brazil." (Yonhap)