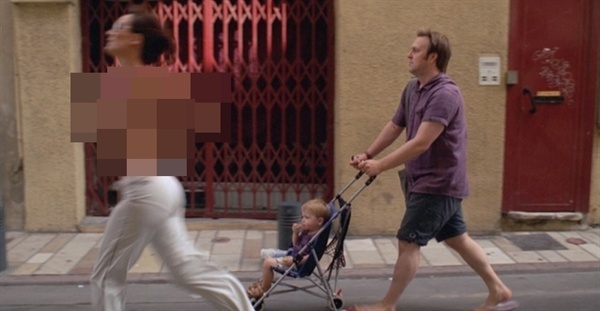 A scene from 2010 French short film "Oppressed Majority" (Screen Capture)
A court ruled in favor of a local education office that dismissed a middle school ethics teacher for showing a film with nudity to students during class.

The Gwangju District Court on Thursday dismissed a complaint from Bae-Lee Sang-heun filed against the Gwangju educational authority, which asked for the cancellation of his dismissal from a teaching position.

The court said the dismissal is valid, as some students felt sexually offended and disturbed by the screening, and that Bae-Lee did not follow the discipline order from the local educational authority after the matter caused controversy.

The film shows a topless woman on the streets, along with images of sexual violence.

The teacher claimed the screening was used within gender equality and sexual ethics education. The film depicts a women-centered world that inverts reality, showing men subjected to everyday sexism as a way to examine actual sexism in contemporary society.

After receiving the complaints, the Gwangju Metropolitan Office of Education referred the case to police and dismissed Bae-Lee from his teaching position in July last year.

The prosecution in August this year decided to not indict Bae-Lee on child abuse charges, saying the film is widely recognized as educational material for gender equality in other countries.

The prosecutorial decision helped Bae-Lee return to a teaching position at a different school within the city.

But last month the Gwangju education office’s disciplinary committee again decided to fire him for disobeying the authority’s orders and making inappropriate comments to students since the original incident, which led him to file the complaint with the Gwangju District Court.