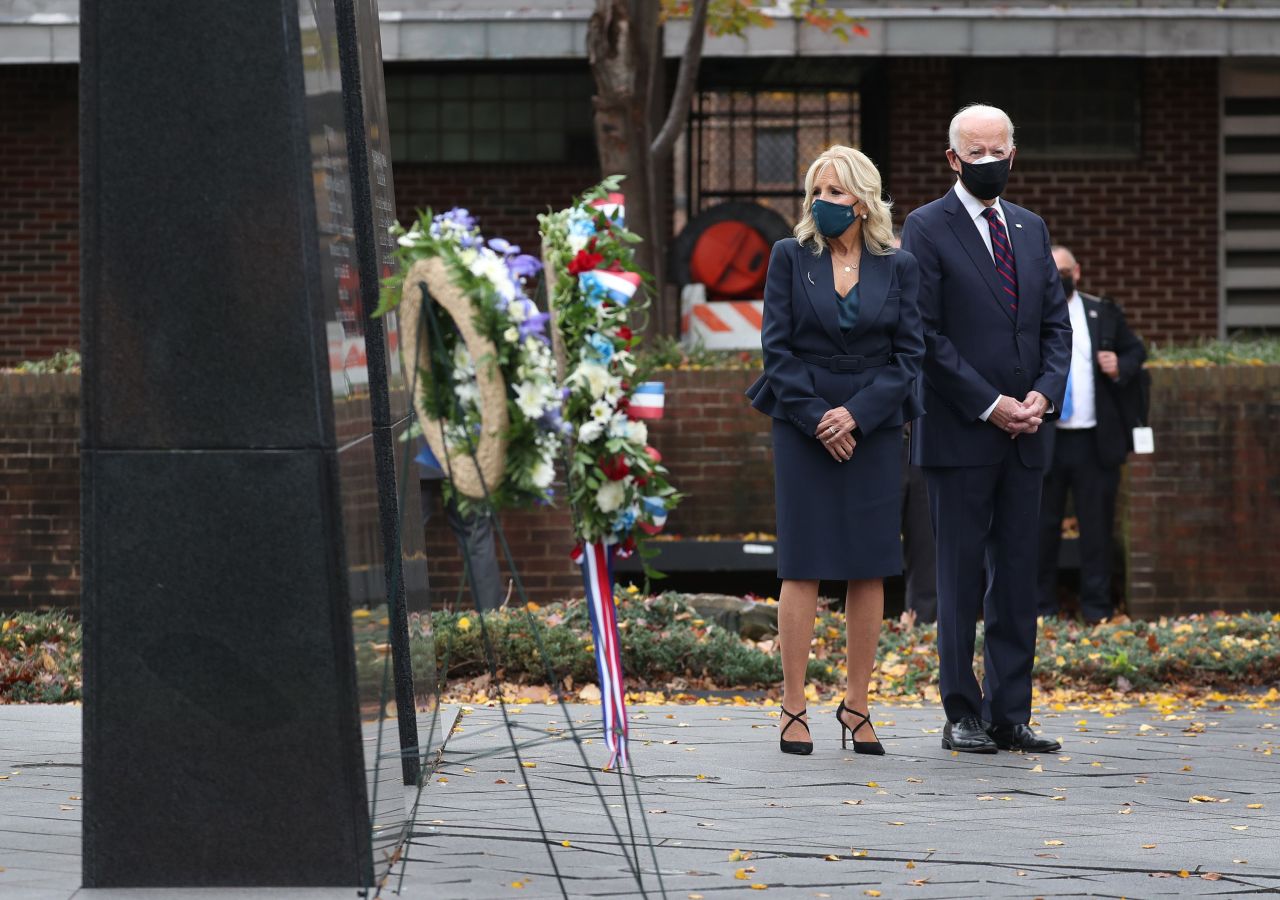 President-elect Joe Biden and Dr. Jill Biden honor military veterans with a stop at the Philadelphia Korean War Memorial at Penn's Landing on Veterans Day on Tuesday in Philadelphia, Pennsylvania. Mr. Biden continues the process of the presidential transition as President Donald Trump continues to contest the election. (AFP-Yonhap)
WASHINGTON (AFP) - US President Donald Trump and President-elect Joe Biden attended on Wednesday separate, simultaneous ceremonies marking Veterans Day, as what should have been a moment of national unity was marred by the Republican's refusal to acknowledge election defeat.

On a rainy, gray day in Washington, the president visited Arlington National Cemetery for a somber wreath-laying ceremony, his first official appearance since the November 3 vote. He made no public remarks.

At the same time Biden appeared at the Korean War Memorial in Philadelphia for his own solemn wreath-laying ceremony, four days after US media projected the former vice president winning the White House.

Since media called the race Trump has not addressed the nation other than via Twitter and a written statement released to mark Veterans Day, and has not conceded to Biden, as is traditional once a winner is projected in a US vote.

With Covid-19 cases shattering records across the country and states imposing new restrictions in a push to contain the virus before winter arrives, Trump seems to have all but shelved normal presidential duties.

Instead, he has remained shut up inside the presidential mansion, claiming that he is about to win and filing lawsuits alleging voter fraud that so far have been backed up by only the flimsiest evidence.

Early Wednesday he was tweeting fresh evidence-free claims of election wins and ballot tampering, despite the consensus from international observers, world leaders, local election officials and US media that the vote was free and fair.

Claiming that a poll in Wisconsin on Election Day had resulted in "possibly illegal suppression" he said he was "now preparing to win the state," which was called for Biden one week ago.

Some Republicans were adding their voices to growing calls for the president to concede, with experts warning his refusal to do so was undermining the democratic process and holding up the transition to Biden, who takes office in January.

Among them was Republican secretary of state for Montana, Corey Stapleton, who heralded the "incredible things" Trump accomplished in office.

"But that time is now over. Tip your hat, bite your lip, and congratulate @JoeBiden," he tweeted.

However, some of the most powerful figures in the Republican party -- among them Secretary of State Mike Pompeo and Senate leader Mitch McConnell -- have appeared to back Trump in his bid to undermine Biden's victory.

"There will be a smooth transition to a second Trump administration," Pompeo said in a sometimes testy news conference Tuesday, while McConnell has said the president was "100 percent within his rights" to challenge the election in court.

None of the lawsuits appears to have the potential to change the result and even a manual recount announced Wednesday in Georgia where Biden has a paper-thin lead is unlikely to alter the fundamental math.

Trump's victory in Alaska, which US media called for him on Wednesday, putting another three electoral votes in his column, was not enough either.

"I just think it's an embarrassment, quite frankly," Biden said Tuesday, when asked what he thinks about the president's refusal to acknowledge defeat.

But otherwise he has largely ignored Trump, signaling that despite attempts by the Republican to stymie his transition to power he was increasingly a president in waiting.

Since his projected win was announced on Saturday, Biden has addressed the nation, set up a coronavirus task force, spoken with world leaders including Trump allies, begun vetting potential cabinet members and delivered policy speeches.

The president's only known activities outside the White House have been to play golf twice over the weekend.

Normally routine secret presidential intelligence briefings have been off the daily schedule. He has made no mention of the dramatic rebound in the Covid-19 pandemic across the country.

Trump's only significant presidential action has been the abrupt firing of defense secretary Mark Esper on Monday, which he announced on Twitter.

His failure to concede has no legal force in itself, but the General Services Administration, the usually low-key agency that manages the Washington bureaucracy, has refused to sign off on the transition, holding up funding and security briefings.

Biden's inauguration is on January 20.