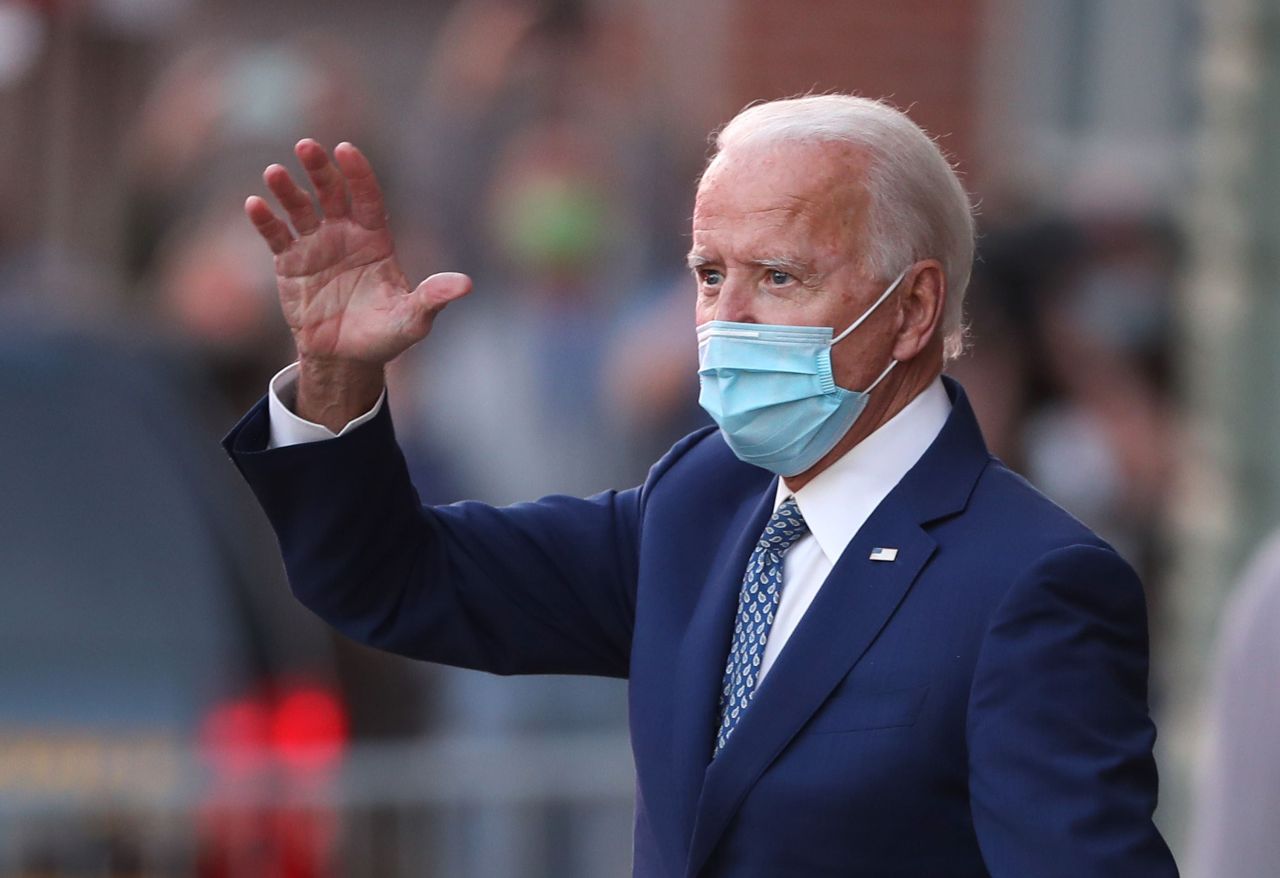 President-elect Joe Biden waves to supporters as he leaves the Queen theater after receiving a briefing from the transition COVID-19 advisory board on Monday in Wilmington, Delaware. Mr. Biden addressed the media earlier in the day about his response to the COVID-19 pandemic. (AFP-Yonhap)
WILMINGTON (AP) -- President-elect Joe Biden signaled strongly on Monday that fighting the raging pandemic will be the immediate priority of his new administration, an abrupt shift from President Donald Trump’s more unworried approach to the virus, as the nation surpassed 10 million COVID-19 cases.

Biden began with a direct appeal to all Americans to wear masks, a departure from Trump, who has mocked Biden and others who make a point of always wearing protective face coverings when around others. In an official move, the president-elect formed a coronavirus advisory board dominated by scientists and doctors, while Trump has had a falling out with the medical experts on his own virus task force.

The swift actions come at a critical moment in the US effort to combat the coronavirus. Pharmaceutical giant Pfizer announced progress with its vaccine trial, helping send financial markets soaring. But surging caseloads, including new infections among leading figures in Trump’s administration, offered a fresh reminder that the nation is still in the grip of the worst pandemic in more than a century.

“The challenge before us right now is still immense and growing, and so is the need for bold action to fight this pandemic,” Biden said after being briefed on the virus. “We are still facing a dark winter.”

He called on Americans to separate politics from the virus and embrace mask-wearing.

“We could save tens of thousands of lives if everyone would just wear a mask for the next few months. Not Democratic or Republican lives, American lives,” Biden said. “Please, I implore you, wear a mask.”

Over the past two weeks, the number of confirmed COVID-19 cases has risen nearly 65 percent. The 7-day rolling average for daily new cases in the US went from 66,294 on Oct. 25 to 108,736.7 on Sunday. In the past week, one of every 433 Americans was diagnosed with COVID-19, and hospitals in several states are running out of space and staff.

Biden noted the pandemic’s disproportionate toll on people of color as he called on Americans to separate politics from the virus and embrace mask-wearing. “Focusing on these communities is one of our priorities, not an afterthought,” Biden said.

Pfizer said Monday that its COVID-19 vaccine may be a remarkable 90 percent effective, based on early and incomplete test results. The drugmaker said it was on track to file an emergency use request with regulators later this month.

Throughout his ultimately unsuccessful campaign, Trump insisted the nation was “rounding the corner” on the coronavirus and that a vaccine was imminent even as infection rates grew. The president, who has yet to publicly acknowledge Biden’s victory, seized on Pfizer’s announcement and the positive reaction in financial markets.

Vice President Mike Pence held a meeting of the White House coronavirus task force on Monday. He tweeted that Pfizer’s reported progress was “HUGE NEWS” and suggested it was the result of a “public-private partnership forged” by Trump.

In fact, Pfizer has funded all its own research. It has a contract to sell doses to the US government if a vaccine is approved but has insisted on handling its own shipping.

The White House task force, which includes the federal government’s leading infectious disease expert, Dr. Anthony Fauci, has been diminished in recent months as Trump grew impatient with efforts to slow the virus that were having a deleterious impact on the economy.

A top Trump administration health official delivered much the same message as Biden, although the timing was coincidental and the occasion apolitical.

Brett Giroir, assistant secretary for health administration, said that Americans must “double down” on the “3 W’s” -- watching their distance from others, wearing masks when that’s not possible, and washing their hands frequently. He also said states and local communities must ramp up testing.

The advisory board that Biden announced on Monday includes doctors and scientists who have served in previous administrations, many of them experts in public health, vaccines and infectious disease.

Rick Bright, a vaccine expert and former head of the Biomedical Advanced Research and Development Authority, is also on the board. He had filed a whistleblower complaint alleging he was reassigned to a lesser job because he resisted political pressure to allow widespread use of hydroxychloroquine, a malaria drug pushed by Trump as a COVID-19 treatment.

Biden also spoke by phone on Monday with Canada’s Prime Minister Justin Trudeau, and much of their conversation was focused on the pandemic.

Public health officials warn that the US could be entering the worst stretch yet for COVID-19 as winter sets in and the holiday season approaches, increasing the risk of rapid transmission as Americans travel, shop and celebrate with loved ones.

“The next two months are going to be rough, difficult ones,” said Dr. Albert Ko, an infectious disease specialist and department chairman at the Yale School of Public Health. “We could see another 100,000 deaths by January.”

Biden has pledged to make testing free and widely available, to hire thousands of health workers to help implement contact-tracing programs and to instruct the Centers for Disease Control and Prevention to provide clear, expert advice.

There’s hope in the wider medical community that a Biden presidency will help restore US leadership on global public health challenges, including the development and distribution of a vaccine when it becomes available.

Dr. Soumya Swaminathan, the chief scientist of the World Health Organization, said she was more optimistic that a Biden administration would join Covax, a WHO-led project aimed to help deploy vaccines to the neediest people worldwide, whether they live in rich or poor countries.

“Everyone recognizes that for a pandemic, you cannot have a country-by-country approach. You need a global approach,” Swaminathan said.