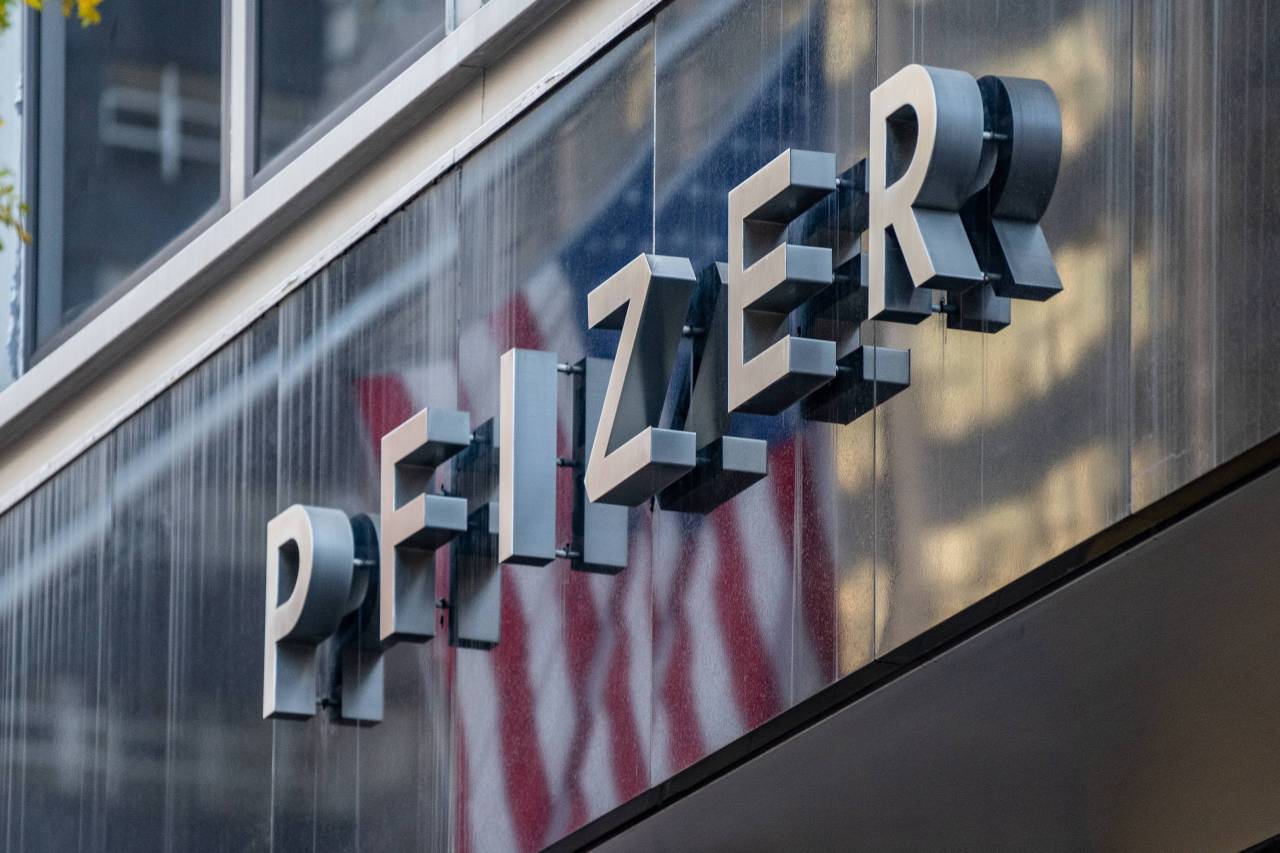 People walk by the Pfizer headquarters on Monday in New York City. Pharmaceutical company Pfizer announced positive early results on its COVID-19 vaccine trial and has proven to be 90 percent effective in preventing infection of the virus. (AFP-Yonhap)
Pfizer Inc. said Monday that its COVID-19 vaccine may be a remarkable 90 percent effective, based on early and incomplete test results that nevertheless brought a big burst of optimism to a world desperate for the means to finally bring the catastrophic outbreak under control.

The announcement came less than a week after an election seen as a referendum on President Donald Trump's handling of the scourge, which has killed more than 1.2 million people worldwide, including almost a quarter-million in the United States alone.

Pfizer, which is developing the vaccine with its German partner BioNTech, now is on track to apply later this month for emergency-use approval from the US Food and Drug Administration, once it has the necessary safety information in hand.

Even if all goes well, authorities have stressed it is unlikely any vaccine will arrive much before the end of the year, and the limited initial supplies will be rationed.

Dr. Anthony Fauci, the US government's top infectious-disease expert, said the results suggesting 90 percent effectiveness are "just extraordinary," adding: "Not very many people expected it would be as high as that."

"It's going to have a major impact on everything we do with respect to COVID," Fauci said as Pfizer appeared to take the lead in the all-out global race by pharmaceutical companies and various countries to develop a well-tested vaccine against the virus.

Global markets, already buoyed by the victory of President-elect Joe Biden, rallied on the news from Pfizer. The S&P 500 finished the day with a gain of 1.2 percent, while the Dow Jones Industrial Average rose more than 800 points. Pfizer stock was up more than 8 percent.

Still, Monday's announcement doesn't mean for certain that a vaccine is imminent: This interim analysis, from an independent data monitoring board, looked at 94 infections recorded so far in a study that has enrolled nearly 44,000 people in the US and five other countries.

Some participants got the vaccine, while others got dummy shots. Pfizer released no specific breakdowns, but for the vaccine to be 90 percent effective, nearly all the infections must have occurred in placebo recipients. The study is continuing, and Pfizer cautioned that the protection rate might change as more COVID-19 cases are added to the calculations.

Dr. Jesse Goodman of Georgetown University, former chief of the FDA's vaccine division, called the partial results "extremely promising" but ticked off many questions still to be answered, including how long the vaccine's effects last and whether it protects older people as well as younger ones.

Trump, who had suggested repeatedly during the presidential campaign that a vaccine could be ready by Election Day, tweeted: "STOCK MARKET UP BIG, VACCINE COMING SOON. REPORT 90% EFFECTIVE. SUCH GREAT NEWS!"

Biden, for his part, welcomed the news but cautioned that it could be many months before vaccinations become widespread in the US, and he warned Americans to rely on masks and social distancing in the meantime. He said the country still faces a "dark winter."

Confirmed infections in the US eclipsed 10 million on Monday, the highest in the world. New cases are running at all-time highs of more than 100,000 per day. And tens of thousands more deaths are feared in the coming months, with the onset of cold weather and the holidays.

Pfizer's vaccine is among four candidates already in huge studies in the US, with still more being tested in other countries. Another US company, Moderna Inc., also hopes to file an application with the FDA late this month.
Both companies' shots are made with a brand-new technology. These "mRNA vaccines" aren't made with the coronavirus itself, meaning there's no chance anyone could catch it from the shots. Instead, the vaccine contains a piece of genetic code that trains the immune system to recognize the spiked protein on the surface of the virus.

Despite cheering the news early on Monday, Trump posted a series of tweets later Monday accusing Pfizer and the US Food and Drug Administration of waiting until after the election to announce its positive vaccine news for political reasons.

Pfizer has insisted that its work is not influenced by politics and that it was "moving at the speed of science." The company itself learned of the interim results on Sunday after its independent data monitors met to discuss them. The FDA was not involved in Pfizer's decision to announce its early results and did not make any announcements of its own.

Pfizer initially opted not to join the Trump administration's Operation Warp Speed, which helped fund a half-dozen vaccine makers' research and manufacturing scale-up. Pfizer instead said it has invested $2 billion of its own money in testing and expanding manufacturing capacity. But in July, Pfizer signed a contract to supply the US with 100 million doses for $1.95 billion, assuming the vaccine is cleared by the FDA.

Pfizer said its only involvement in Operation Warp Speed is that those doses are part of the administration's goal to have 300 million doses of COVID-19 vaccines ready sometime next year.

The strong results were a surprise. Scientists have warned for months that any COVID-19 shot may be only as good as flu vaccines, which are about 50 percent effective and require yearly immunizations. Earlier this year, Fauci said he would be happy with a COVID-19 vaccine that was 60 percent effective.

Whatever the ultimate level of protection, no one knows if people will need regular vaccinations.

Also, volunteers in the study received a coronavirus test only if they developed symptoms, leaving unanswered whether vaccinated people could get infected but show no symptoms and unknowingly spread the virus.

Pfizer has estimated it could have 50 million doses available globally by the end of 2020, enough for 25 million people.

Public Citizen, the consumer advocacy group, called the release of the preliminary and incomplete data "bad science" and said that any enthusiasm over the results "must be tempered" until they are reviewed by the FDA and its independent experts.

"Crucial information absent from the companies' announcement is any evidence that the vaccine prevents serious COVID-19 cases or reduces hospitalizations and deaths due to the disease," the organization said. (AP)