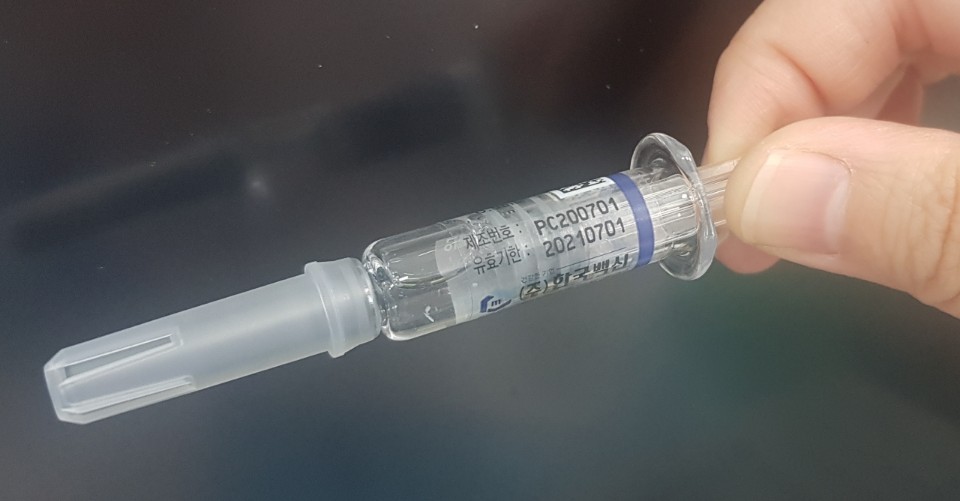 Photo shows a syringe-packaged vaccine with white contaminants (courtesy of the Ministry of Food and Drug Safety)
Public health authorities in South Korea are investigating possible links between the death of a teenager and a flu vaccine that experienced heat fluctuations.

The Korea Disease Control and Prevention Agency said in Monday’s press briefing that a 17-year-old boy without preexisting medical conditions died at his Incheon home on Oct. 16, two days after getting a flu shot. The vaccine he received was a product distributed by Shinsung pharmaceutical company, which was earlier accused of handling errors.

The teen death’s association with the vaccine is unclear, with an autopsy still underway, the agency said.

More than 1 million doses of flu vaccine have been withdrawn in the past month due either to mishandling or contamination, or both. The government authorized the use of the remaining 4.9 million doses that underwent varying ranges of heat exposure and another 4 million packaged in syringes deemed to cause formation of suspicious residue, after testing of samples showed they were still safe and effective.

The series of mishaps surrounding flu vaccinations this year is unprecedented in the country’s long influenza immunization history, according to health experts.

Infectious disease specialist Dr. Kim Woo-joo of Korea University Medical Center in Guro, southern Seoul, pointed out there are “no guidelines from credible institutions” for testing vaccines that have experienced a cold chain breach for use on people.

“In principle, vaccines affected by a cold chain breach are discarded,” he said. “Risks are being taken in proceeding with their administration.”

But if parents are concerned, she said that healthy children can afford to put off vaccinations until the findings from the government investigations are available.

“The flu risk with children is that they will spread it in communities and possibly sicken people who are at a more vulnerable age. The chances of flu leading to death in 13- to 18-year-olds are very slim,” she said.

“In the meantime, instruct children to wear face masks, observe hand hygiene and stay away from crowds.”

The public anxiety over flu vaccines is running high, especially among parents, following the news of the teen’s death.

A mother of a 16-year-old 10th grader at a high school in Yeouido, central Seoul, said getting a flu jab was already harder than other years due to a shortage. But now she is wondering whether she should have her daughter vaccinated at all.

“The clinics in the neighborhood said they are all out of stock. I was going to travel out of town with my kid to get her a shot, but now I’m a bit worried. She is just about that age,” she said.

Over 90 percent of the people who received the vaccines with suspected contaminants were under 19 years of age, according to the ruling Democratic Party of Korea Rep. Jung Choun-sook on Monday.

“The Drug Safety Ministry waited until the last minute before they disclosed to the public there were problems with the vaccines, exposing tens of thousands of people to vaccine risks that could have been avoided,” the lawmaker said in a press release.

Public trust in flu vaccines appears to be eroding in Korea, which is generally a very well vaccinated country.

An Oct. 5-6 survey conducted jointly by main opposition People Power Party Rep. Jeon Bong-min’s office and mobile app Blind found 42.7 percent of around 5,400 respondents saying they would not have their children vaccinated against the flu this year -- which is almost as many as the 43 percent who said they would.

Pulmonologist Dr. Park Sung-hoon of Hallym University Medical Center in Anyang, Gyeonggi Province, said he has had to assure his patients who are feeling unsure.

“In theory, the safety of an inactivated vaccine would not be marred significantly by a brief deviation in storage temperature,” he said. “I tell my patients who are hesitant that our hospital is not using the vaccines that are said to have problems.”

Another pulmonologist, Dr. Han Chang-hoon of state-run Ilsan Hospital warned against linking rare adverse events to the safety of vaccinations.

“I worry that these unlikely incidents being sensationalized could harm people’s confidence in vaccines,” he said. “So far, the government has yet to find issues that call for such concerns with the flu vaccines. The benefits of being immunized almost always outweigh the rare risks associated with it.”