Recently, global sensation BTS faced an uproar after the group received an award from the Korea Society, which celebrates South Korea-US ties. In an acceptance speech, leader RM mentioned the “pain of history” in a reference to the 1950-1953 Korean War.

His seemingly innocuous remarks enraged millions of Chinese social media users, who criticized him for neglecting the sacrifices of China, which fought on North Korea’s side. 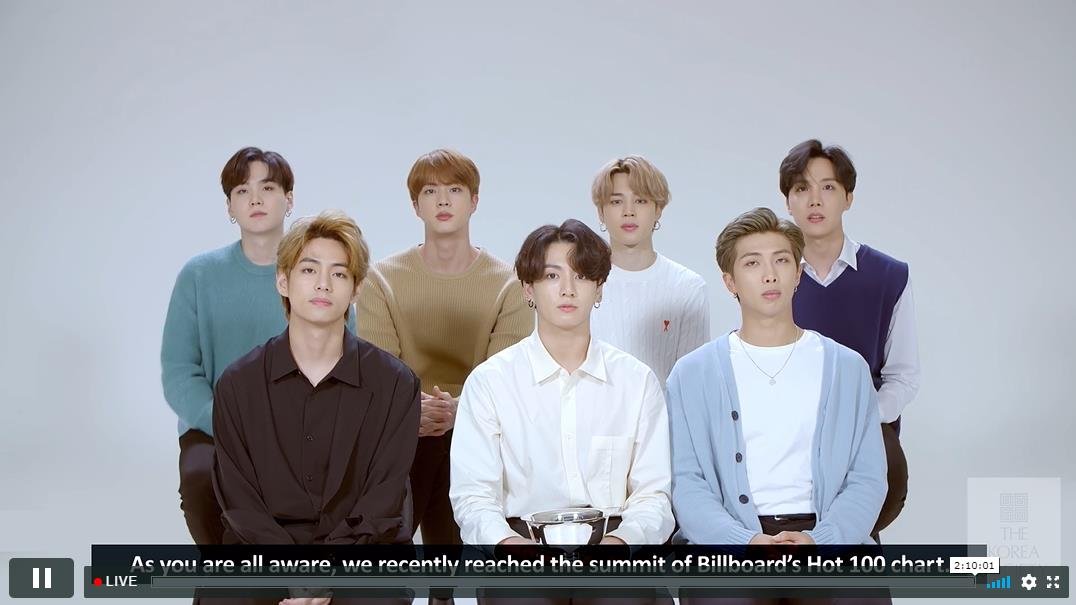 (Korea Society)
China’s state-run Global Times stood at the forefront of accusing the group, while big advertisers like Samsung Electronics and Hyundai Motor were forced to remove BTS-themed products and ads from their Chinese websites.

Even in Seoul, the issue was mentioned during the ongoing parliamentary audit, with the ruling and opposition parties pitted against each other.

“When it comes to diplomatic or historical issues, conflicts are unavoidable, even unsolvable, since they are a matter of perspective. I think BTS did what they could do at the given situation, and those to be blamed are people who try to frame it with nationalism,” culture critic Jung Duk-hyun told The Korea Herald.

“What’s most important here is that we should let culture serve its best purpose, which is to enable cross-cultural communication and overcome linguistic and historical barriers.”

A growing number of K-pop groups are embracing foreign members to better appeal to global markets. The issue is that the performers are sometimes considered to be representing their home countries.

“Foreign members will keep facing pressure to espouse public support for their own nationalities in such circumstances. We remember that big bands with Chinese or Japanese members struggle when long-held diplomatic issues resurface,” Lee said. “East Asia’s historical background is much more complicated than many global K-pop fans think.”

So how should K-pop artists and their agencies deal with these situations?

“Unless it’s a matter of racism, gender or ethical problems, I don’t think there’s any need to be agitated by the controversy itself. I believe it’s best to allow the bandmates to freely express their opinions and focus on their careers, rather than reacting to something they cannot control,” he said.