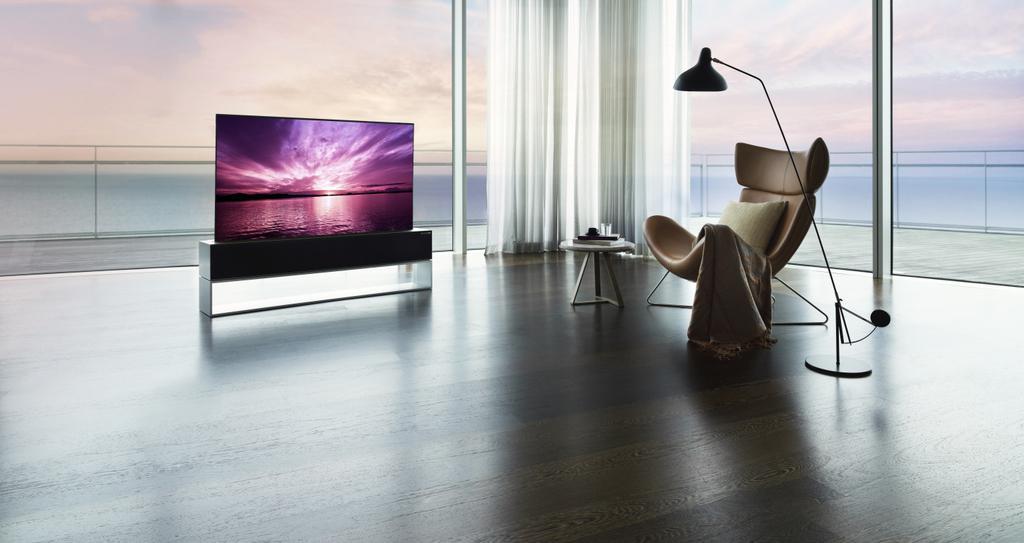 (LG Electronics Inc.)
LG Electronics Inc. on Tuesday released the world's first rollable TV in South Korea at a jaw-dropping price of 100 million won ($87,000) as the tech giant aims to target high-end consumers amid the pandemic.

The company said overseas launch schedules of LG Signature OLED R have not been fixed yet due to the COVID-19 situation in each country.

LG said the product, which uses flexible OLED display that leverages self-lighting pixel technology, is designed to deliver a differentiated user experience to high-end consumers and strengthen its position in the premium TV market.

Its name "R" contains the meaning of "revolutionary," "rollable" and "redefine the space," according to the home appliance maker.

The 65-inch TV model named RX is highlighted by its screen that rises from a box and can be rolled up inside.

Depending on how much the screen has rolled up inside the base, it provides three different viewing options for users to design interior space.

While the full view option is for watching TV, the line view option exposes only a part of the screen and offers five different stylish modes: music, clock, frame, mood and ThinQ home dashboard to check conditions of other smart devices inside the house.

Zero view completely hides the screen and allows it to be used as a Bluetooth speaker.

LG said it has adopted a differentiated system for its rollable TV from production to customer care service.

LG said production and quality inspection of the rollable TV will be processed by artisans and craftspeople at LG's TV assembly line in Gumi, some 260 kilometers southeast of Seoul, a similar system used in making luxury cars and watches.

It will also engrave a message of the customer's choice on the TV's aluminum cabinet.

The owners of LG Signature OLED R will get free after-sales support for three years and will get special checkup service twice a year.

The world's top OLED TV maker originally planned to launch the rollable TV in 2019, but its mass production has been delayed due to OLED display supply and yield rate issues.

At this year's CES, LG unveiled a different model of its rollable TV with a screen that rolls down from the ceiling. (Yonhap)