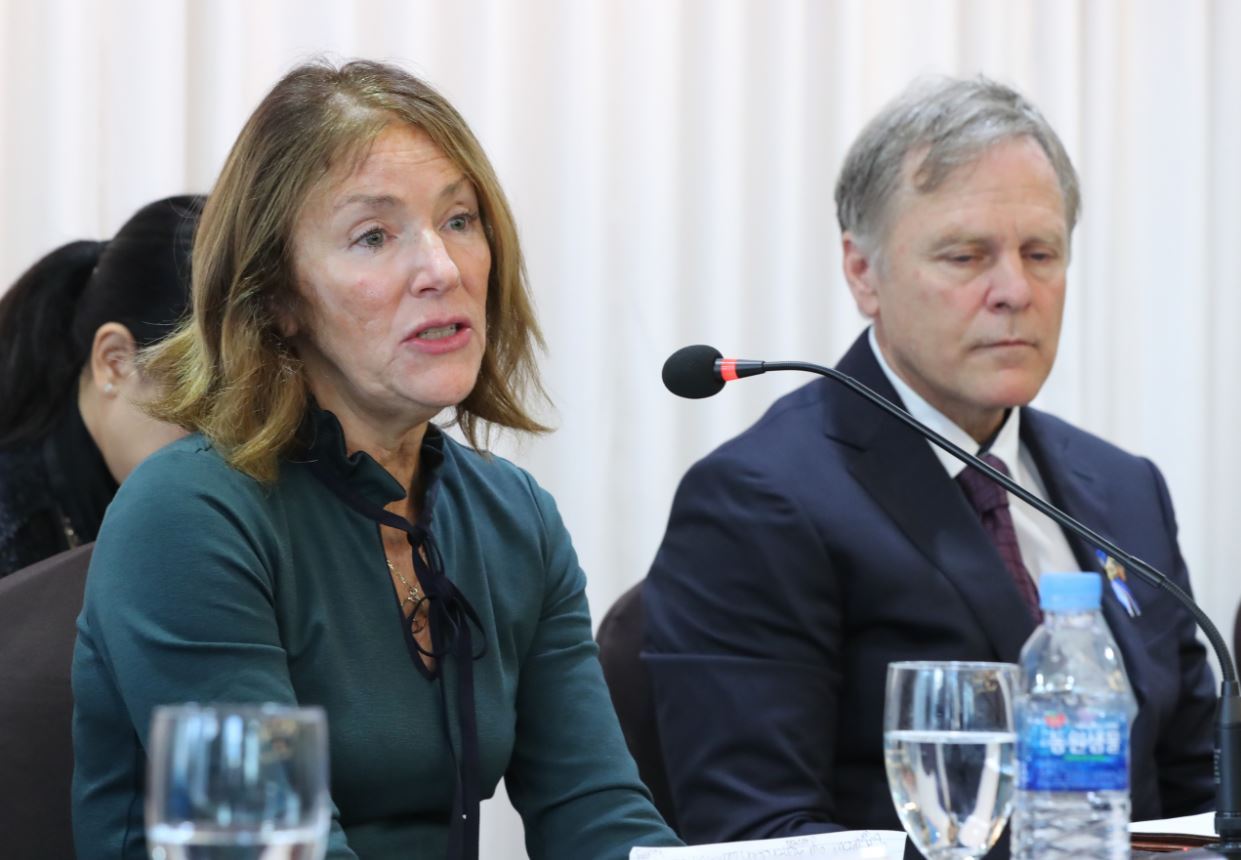 Cindy (left) and Fred Warmbier, whose son Otto died shortly after release from North Korea’s custody in 2017, speaks during a press conference held Nov. 22, 2019, at Koreana Hotel in Jung-gu, central Seoul. (Yonhap)
Fred Warmbier, whose son Otto died in 2017 after being detained in Pyongyang, said in an email response to The Korea Herald that he supported the family of Lee Dae-jun, a South Korean fisheries official who was killed by North Korean soldiers last month.

“I have written an article in support of the family,” Warmbier said in the email, reciprocating a gesture earlier this month from Lee Rae-jin, the official’s brother who said he wished to reach out to the parents of the American college student.

Warmbier also thanked Lee for his “courage in standing up to the Kim regime.”

Upon receiving Warmbiers’ message of support, Lee said over the phone Monday morning he was “incredibly thankful.”

Lee said he would also like to “extend (his) support and solidarity to the Warmbier family,” vowed to offer his help in any way he can, and hoped for joint endeavors in the future.

“If victims work together and continue to speak out against North Korea, our voice will hold more weight in the international community -- which then could potentially act as a pressure against the regime,” he said.

Lee said he was contemplating legal action against North Korea for the extrajudicial killing of his brother, as the Warmbiers have done for their son.

“Words alone are not going to make North Korea budge. We have to find ways to hold them responsible -- legally or financially,” he said, adding, “I think the Warmbier family showed the world that is possible.”

Lee said he was “aware that this is only the beginning of a long battle.” “But I won’t back down until my brother gets the justice he deserves.”

In the article attached to the email response, Warmbier said he and his wife, Cindy, “pledge (their) solidarity” with the South Korean family.

“We are victims of the same lies and horrific abuses of the Kim regime and know that it is important to stand up to them,” Fred Warmbier wrote in the article.

Citing support that US President Donald Trump has provided for their family, he called for similar action from South Korean President Moon Jae-in.

“President Trump and his administration have been very supportive of our efforts in seeking justice for Otto and as a young democracy, South Korea, with President Moon, must stand up for the rights of the Lee family,” he said.

“As democracies we must honor and protect the rights of our citizens. President Moon must allow the Lee family to work with him and his administration to seek justice and resolution.”

Closing the article, he stressed, “President Moon must support the Lee family and stand up to the lies of North Korea.”

This is not the first time the Warmbiers have urged more support from Moon and his administration for victims of North Korea’s abuses.

During a visit to Seoul last November, the couple joined a press conference organized by the Korean War Abductees’ Family Union, in which they called on the South Korean government to do more to counter the North’s human rights violations.

“What’s discouraging is to be in South Korea and to just to interact with KWAFU, and they don’t get support from the Moon administration, and that’s a real problem and that needs to be changed,” Fred Warmbier said at the conference.

Moon at the time turned down the family union’s request for a meeting with the Warmbiers.

Meanwhile, the Lee family is seeking an independent inquiry from the United Nations into the case for suspected violations of international laws of human rights and war, among others.

In a formal letter submitted Sunday, the family asked the agency to urge North Korea to conduct an investigation jointly with South Korea or by itself, to publicly apologize for the murder and to take measures to avoid such a recurrence in the future.

“While ... the Workers’ Party of Korea has purportedly sent a letter addressed to the Blue House on Sept. 25, 2020, with an apology by supreme leader Kim Jong-un, it falls short of the necessary measures that North Korea must take,” the letter read.

The letter also pointed out that the South Korean government should act on its obligation to protect the rights of the citizen, and to grant the family access to the relevant North Korean communications.

The South Korean official, 47, was fatally shot in the North’s waters at around 9:40 p.m. on Sept. 22 after he had gone missing the previous day while on patrol duty. He leaves behind two children.

South Korean authorities claim he was killed in the process of defecting to the North. His family has rejected those claims.

Below is the full text of the message from the Warmbiers to the Lee family:


Cindy and I pledge our solidarity with Mr. Lee Rae-jin.

We are the same victims of the same lies and horrific abuses of the Kim regime and know that it is important to stand up to them. Our government has worked with our family to seek justice for Otto. A tenet of democracy is that our leaders must defend the rights of her citizens when they are abused by hostile foreign governments, and provide them with tools to seek justice and resolution.

The world is familiar with President Trump’s approach to North Korea. He has met with Kim several times and this needed to happen. The future will determine the outcome. President Trump and his administration have been very supportive of our efforts in seeking justice for Otto and as a young democracy, South Korea, with President Moon, must stand up for the rights of the Lee family. As democracies we must honor and protect the rights of our citizens. President Moon must allow the Lee family to work with him and his administration to seek justice and resolution.

President Trump and his administration have worked with and supported our family in many ways. He placed North Korea on the State Sponsor of Terror list, which allowed us to sue North Korea. He also honored Otto at the State of the Union Address. I was overcome with emotion hearing his tribute to Otto. He acknowledged to the world that Otto was an innocent amazing young person, who did nothing wrong and was tortured and killed by Kim and his regime. Up until this time the lies the Kim regime told about Otto went unchallenged.

Our government has helped us with the seizure of the Wise Honest, and is also working to help us recover millions of dollars worth of North Korean assets in American banks. Last January, President Trump, signed into law, The Otto Warmbier Brink Act, the toughest secondary sanctions law, ever enacted against North Korea. The President honored Otto and our family with a dinner at the White House. These actions taken by the President and his administration are necessary to send a message to the Kim regime that while our governments are open to broad negotiations for peace on the Korean peninsula, there will be support for the victims and consequences to the Kim regime for the abuses of our loved ones. President Moon must support the Lee family and stand up to the lies of North Korea.