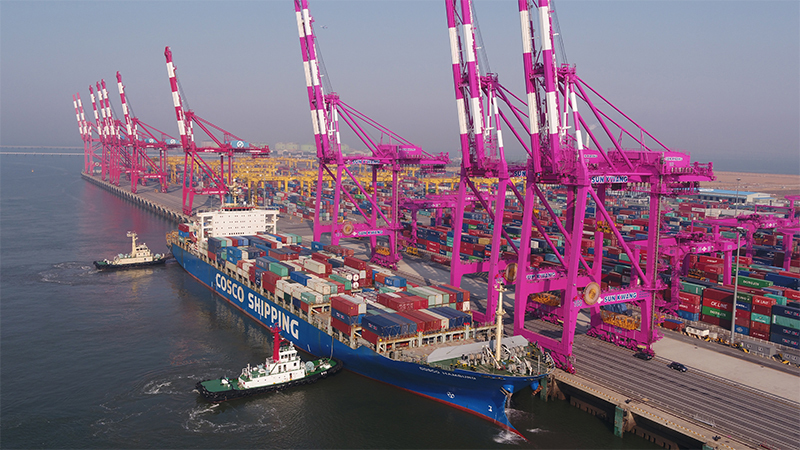 Incheon New Port (Yonhap)
Incheon Port Authority announced on Sunday a multiproject plan to build a smart port, a move in line with the country’s New Deal program that seeks a way out of the COVID-19 pandemic.

Under the plan, a total of 35 projects will take place to build a smart port that is eco-friendly, safe and beneficial to the local economy. The IPA said it set out the goals after co-opting the government’s new deal strategy.

As part of efforts to go smart, the Incheon Port will adopt a completely automated system for its new “phase 1-2” container terminal with a schedule to open in 2025, it said.

The automation system will see remote-controlled automated guided vehicles powered by electricity introduced, which can speed up workflow, reduce pollution and risks posed to staff.

The IPA also plans to make the new smart distribution center a shareable platform so that the system can be provided at an affordable price to some 60 small and medium-sized businesses starting from 2023.

The move is expected to both help nurture up-and-coming logistics companies and strengthen the port’s competitiveness.

To keep things green, the port authorities said they will pursue “various research and development projects,” including a facility control system that relies on artificial intelligence and self-driving drones.

“The South Korean New Deal co-opted by the IPA is not only in step with the government’s policy but also a preemptive move to be prepared for the post-COVID-19 era,” said Kim Jong-gil, head of the planning and coordination office.

The IPA will rigorously pursue the project to turn Incheon Port into a “global smart port that leads sustainability and innovation, as well as creating jobs to energize the local economy,” he added.

The move comes as the Ministry of Oceans and Fisheries announced last month a budget of over 6 trillion won ($5.25 billion) for next year, with a focus on digital transformation and creating an eco-friendly shipbuilding industry.