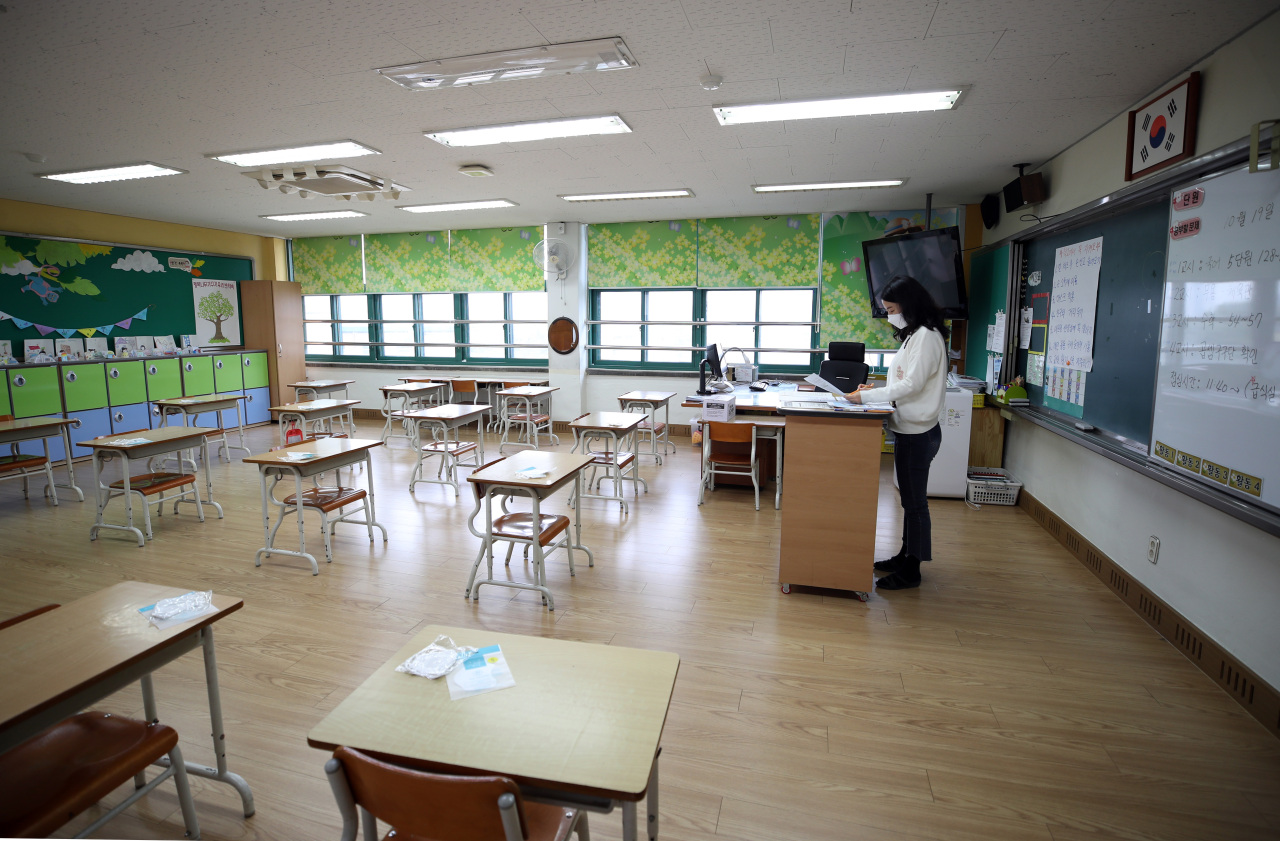 A Seoul elementary school teacher prepares for in-person classes on Friday, as more students are expected to return to classrooms starting next week. (Yonhap)
Health officials and experts once again urged people to maintain social distancing ahead of the first weekend since physical distancing rules were relaxed on Monday.

The Ministry of Health and Welfare’s spokesperson Son Young-rae said in Friday’s briefing that the domestic coronavirus situation had not yet stabilized, urging against nonessential meetings and gatherings.

“Adherence to health guidelines such as face mask wearing and hand hygiene is crucial now that more people are expected to return to normal activities starting this week,” he said.

The country advanced into the lowest tier of its physical distancing system Monday, allowing resumption of near-normal operations of most businesses, including bars and nightclubs.

Infectious disease specialist Dr. Kim Woo-joo of Korea University Medical Center said, “There should be clear communication that moving on to the least stringent level of physical distancing does not mean no physical distancing.”

He said the cooling weather could lead to a rise in patients with coronavirus-like symptoms, for whom timely care could be denied until they present coronavirus test results. “This winter will be a bad time to come down with the cold or flu,” he said.

Korea conducted 8,687 tests on Thursday detecting 47 new cases of the novel coronavirus, according to the Korea Disease Control and Prevention Agency’s updates.

Forty-one of the newly confirmed cases were locally transmitted, and the other six imported from overseas. The cumulative number of official cases is now 25,035.

The daily case tally fell below 50 for the first time in 17 days. Health officials say there is no discernible increase in infections tied to the two consecutive holiday weekends earlier this month.

Meanwhile, a cluster of infections at a Busan nursing home populated by elderly is feared to lead to a possible rise in severe cases and deaths. So far, at least 53 residents and workers there have tested positive. One of the two residents who died was diagnosed posthumously. The home is now being isolated as a cohort by the city office.

The number of severely ill patients rose by three overnight to 85. Nearly 90 percent of them are 60 or older. Out of the total 417 critical care beds in the country, only 58 were available as of Thursday.

According to the Health Ministry data, around 3 percent of all patients here end up developing severe symptoms. On average, patients with severe cases stay around 25 days in the hospital.

Two more people died due to the disease, bringing the death toll to 441. The fatality rate stands at 1.76 percent, which is much higher for those aged above 80 at 21.2 percent.

The number of recoveries reached 23,180, up 98 from a day prior. Since late June, the bar for discharging patients has been lowered to improve bed turnover at hospitals. Patients who remain without symptoms for 10 consecutive days after their diagnosis are considered officially recovered and released from medical care.