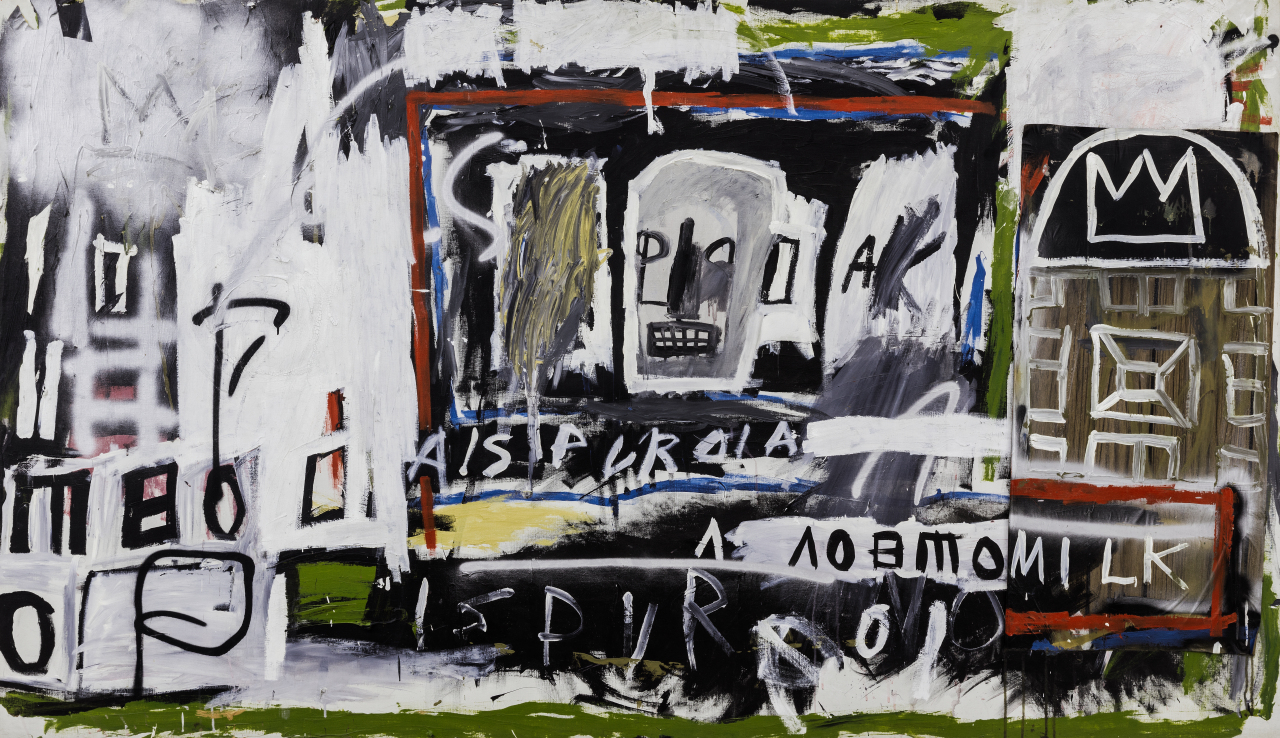 The title of the exhibition, “Jean Michel Basquiat: Royalty, Heroism, and the Streets,” at the Lotte Museum of Art reflects what the artist valued in his art. Basquiat chose the three subject matters -- royalty, heroism and streets-- that he cared about in his art in a 1983 interview.

Basquiat was the first African American artist to establish a reputation in the global art world. Beginning as a graffiti artist in the late 1970s, he collaborated with renowned pop artists such as Andy Warhol.

His free-spirited paintings that seem as if they were drawn in a unique rhythmic way carry the artist’s aura.

Born in 1960 to Haitian father and Puerto Rican mother, Basquiat created more than 3,000 artworks including paintings, drawings and sculptures until he died at age 27 in 1988.

As a teenager in 1977, Basquiat formed the graffiti duo SAMO with his friend Al Diaz, and they spray painted cryptic statements and symbols all over lower Manhattan. Their humorous, profound and rebellious declarations were scattered throughout Soho’s art scene, shaking up the white-dominated art world.

A quote from the artist on display shows what the artist wanted to tell people through this art: “This city is crawling with uptight, middle-class pseudos trying to look like the money they don’t have. Status symbols. It cracks me up. It is like they are walking around with price tags stapled to their heads. People should live more spiritually, man. But we can’t stand on the sidewalk all day to screaming at people to clean up their acts, so we write on walls.” 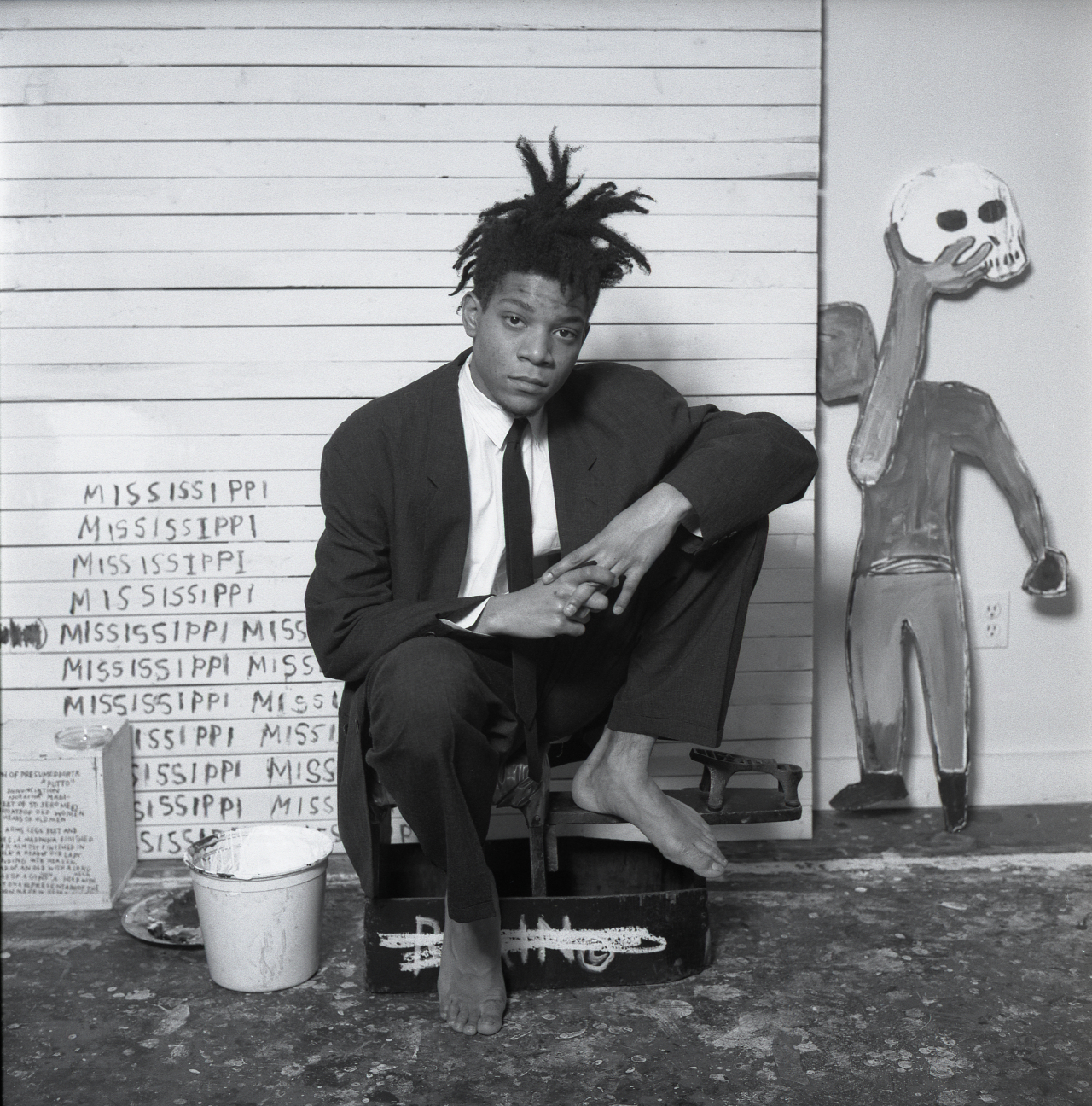 Jean-Michel Basquiat (Lotte Museum of Art)
However, while Diaz wanted to leave the graffiti works anonymous, Basquiat wanted to make his name known to the art scene. The conflict between the two in 1978 led to the break-up of the duo group with the phrase “SAMOⓒ IS DEAD” all over the street of New York. The incident naturally led Basquiat make a transition into painting particularly after meeting Keith Haring and Kenny Scharf.

Basquiat is known to have been exposed to masterpieces of art at an early age, thanks to his mother who took him around art museums in New York and showed him numerous works by the masters from Da Vinci to Picasso. He was given a copy of “Gray’s Anatomy,” a human anatomy textbook, as a gift from his mother while he was hospitalized following a traffic accident in 1968. That textbook became the foundation that shaped his own art world.

The exhibition includes some archives that show how Basquiat closely worked with Andy Warhol along with a painting that the two artists worked together. Andy Warhol’s unexpected death in 1987 deeply affected Basquiat, who was found dead from a drug overdose the following year.

In 2017, his painting “Untitled” was auctioned for $110.5 million at Sotheby’s, becoming the highest-priced work by an American artist and for any artwork created after 1980, according to the auction house.

“After the pandemic broke out, a growing number of exhibitions have tended to resort to media art or replicas. It is not particularly bad in terms of bringing variety to the art scene, but I would say such tendency is never good for audiences,” said Kim Chan-yong, a docent of the exhibition told the visitors on Wednesday. “The Basquiat exhibition is full of the artist’ original works, which is a precious opportunity to art lovers.”

Around the 150 masterpieces of paintings, drawings and sculptures at the exhibition are mostly from Jose Mugrabi, an Israeli businessman who is known as the prominent art collector whose major art collection includes Andy Warhol.

Attracting an average of 2,000 visitors per day, the exhibition has seen a great popularity since its opening on Oct. 8. The total 150 masterpieces of the artist are worth nearly a trillion won, according to the museum. The exhibition runs through Feb. 7, 2021.