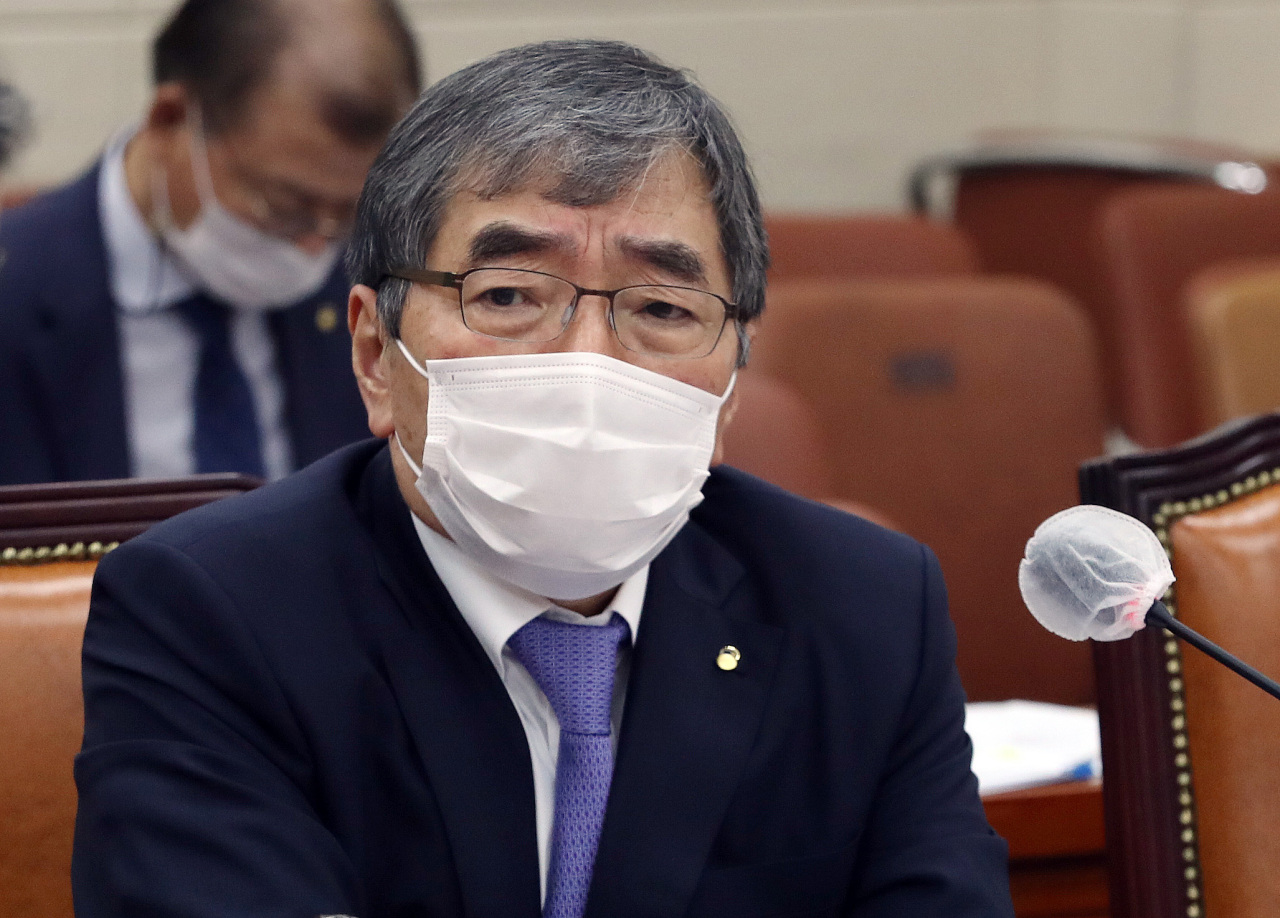 Financial Supervisory Service Gov. Yoon Suk-heun speaks at a parliamentary audit session held on the financial watchdog on Tuesday. (Yonhap)
Troubled hedge fund mis-selling scandal that led to losses for South Korean investors and the fund managers’ alleged collusion with ruling party lawmakers and former Cheong Wa Dae officials were at the center stage during the parliamentary audit on the Financial Supervisory Service on Tuesday.

FSS Gov. Yoon Suk-heun pledged to take stern actions against those responsible for the mis-selling, as the financial watchdog‘s investigation into managers such as Lime Asset Management and Optimus Asset Management is about to end.

"FSS is at the final stage of investigations into Lime and Optimus,” said Yoon, who was summoned to the National Assembly’s audit. “(FSS) plans to take stern action against any violations of the law.”

Yoon added the watchdog will allow victims of the mis-selling to get compensation as the total inspection on privately-pooled funds proceeds. Earlier in August, sellers of Lime‘s trade finance fund -- which lost 98 percent of the principal -- accepted FSS’ recommendation to fully compensate end-investors‘ total principal.

“(FSS) has moved to help innocent end-investors of troubled funds to cancel the contract with fund sellers and get their principal redeemed (regardless of the fund performance),” he said. “We will do our best to have (end-investors) get compensation swiftly and fairly.”

But Yoon was largely under siege as lawmakers of the main opposition People Power Party held the FSS accountable for the mis-selling, saying the watchdog had been deliberately slow to launch inspections despite the immediate need to take action.

According to People Power Party Rep. Yoo Eui-dong, it took 112 days for FSS to take disciplinary action over the lack of capital of Optimus in 2017 after its investigation wrapped up, showing contrast with the average of 58 days.

Another People Power Party Rep. Yoon Jae-ok said FSS was aware of the Optimus crisis, as it had received seven complaints and categorized Optimus as a fund manager subject to a financial incident, before the fund scandal came to the fore.

The lawmaker suspected that FSS failed to function as usual due to pressure from presidential aides, citing speculations that Lime and Optimus officials as well as fund backers had bribed officials of the presidential office and FSS.

The FSS chief denied the lawmaker’s suspicion, saying that the presidential office exerted zero influence on the FSS’ investigation. It took longer than expected for the watchdog to scrutinize all privately held funds to look for irregularities, he added.

This comes amid a series of speculations that authorities and the government had overlooked the cases involving Lime and Optimus -- both of which turned out to have been fraudulent -- despite fraud allegations.

The main opposition party recently ramped up its offensive, as key people involved in the hedge fund scandal testified in court that they had bribed key political figures.

One of the suspects of the bribery is Kang Gi-jung, a former senior presidential secretary for political affairs. Kang denied the bribery accusation and filed a criminal complaint against Kim Bong-hyun, prime suspect in a financial fiasco involving Lime, accusing him of defamation. Democratic Party Rep. Ki Dong-min is also facing bribery allegations associated with Lime fund.

The People Power Party demanded the special counsel look into the fund fiasco, while the ruling Democratic Party largely distanced themselves from the allegations, saying the speculations had been falsely stated.

Since early this year, thousands of end-investors in either Lime or Optimus fell victim to the financial scam that had incurred a combined 2.1 trillion won ($1.8 billion) damage.