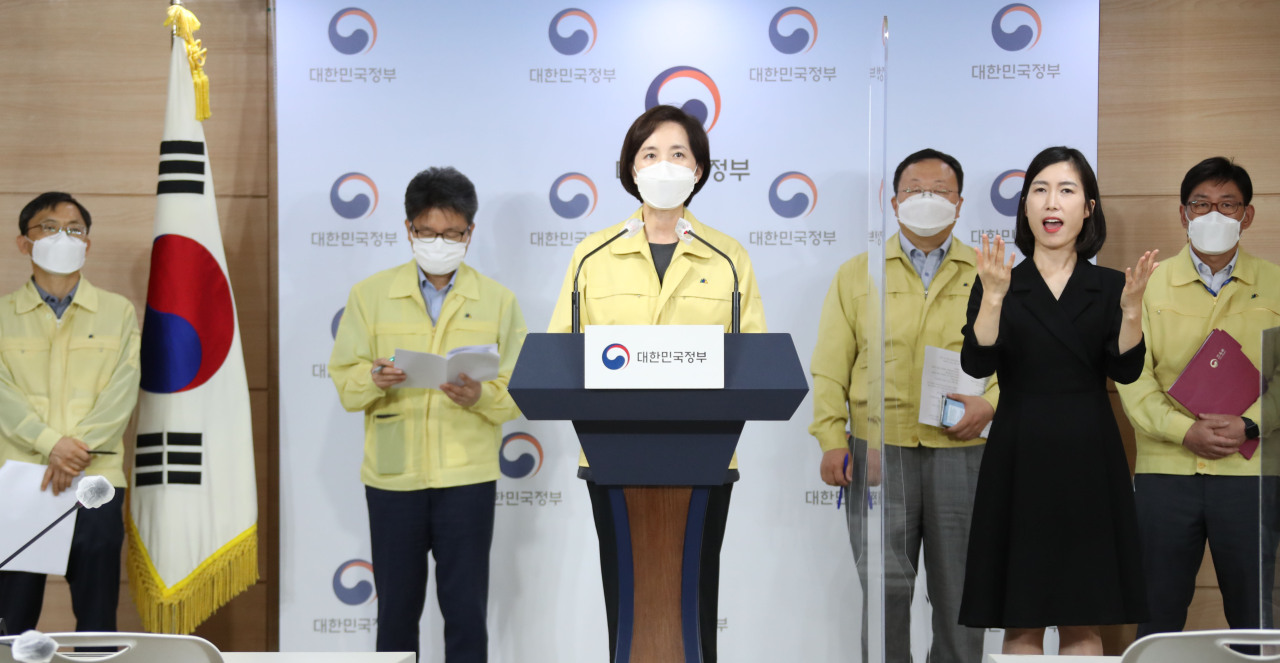 Education Minister Yoo Eun-hae announces during a press briefing Sunday the ministry's plan for in-person class attendance from Oct. 19 after Korea adjusted its social distancing measure to its lowest level. (Yonhap)
Schools in South Korea will raise their attendance caps for schools in line with the recent easing of social distancing guidelines.

Many hope this will narrow the achievement gap among students from different socioeconomic backgrounds, which has widened since the start of the coronavirus outbreak.

The Education Ministry announced Sunday that all schools will be allowed to have two-thirds of their students attend classes in person starting Oct. 19. Currently, attendance is capped at two-thirds for high schools and one-third for elementary and middle schools.

The ministry also allowed schools outside Seoul, Incheon and Gyeonggi Province to respond flexibly to the relaxed social distancing rules, meaning they can require in-person attendance by 100 percent of students if deemed necessary.

Some regional education offices outside the capital region had previously asked the Education Ministry to allow more students to attend classes in person, as the coronavirus situation in those locations was not as bad as in Greater Seoul.

While the new attendance caps will officially be in place next week, the ministry has allowed regions to make adjustments beforehand. In response, some regions are increasing their attendance rates above two-thirds.

“Full attendance is possible as schools and educational offices autonomously decide ways to hold in-person classes,” said Education Minister Yoo Eun-hae in a press briefing Sunday. “But I request extra caution in making all students come to school at once.”

Many regional educational offices were already seeking ways to expand in-person classes prior to the announcement. Some were considering whether to divide students into groups and make them take in-person classes at different times throughout the day instead of relying on online classes.

The Seoul Metropolitan Office of Education announced Monday that it will require a two-thirds attendance rate for all schools in the city, while mandating full attendance for first grade elementary and middle school students.

Seoul schools with fewer than 300 students will be allowed to set higher attendance rates.

Regional educational offices and schools are pushing to expand the proportion of in-person classes out of concern about the growing achievement gap among students of differing socioeconomic backgrounds.

According to a survey of 51,021 teachers in July, 79 percent of respondents said the learning gap had widened since online classes started. The Education Ministry identified 12,700 students who had fallen behind since the first semester of this year and pledged to establish 130 learning support centers.

Many students found it difficult to keep up with classwork through remote learning, and teachers were struggling to keep their students engaged and interested.

Mindful of the worries, many have called for the expansion of in-person classes for students instead of merely waiting for the ministry to follow up on its vow to improve the quality of online classes.

Some civic groups and lawmakers have argued that the government should invest in cutting the number of students per class so that more can attend. Lower student-teacher ratios would improve the quality of teaching and create a safer, more efficient learning environment, they say.

The average class size in Korea was 23.1 students at primary schools and 26.7 at middle schools, according to 2018 OECD data, higher than the respective OECD averages of 21.1 and 23.3.

Korea ranked 23rd out of 30 OECD member countries in terms of class size for elementary schools and 24th for middle schools.

Rep. Lee Tahney of the Democratic Party, who drafted and proposed the bill, said the legislation aims to limit the maximum number of students per class to 20. The Education Ministry has remained cautious about any drastic changes that would require costly adjustments.

“We have suggested that reducing class sizes should be given top priority in order to narrow the achievement gap and expand in-person classes for students,” the Korean Teachers and Education Workers Union said in a statement late last month.