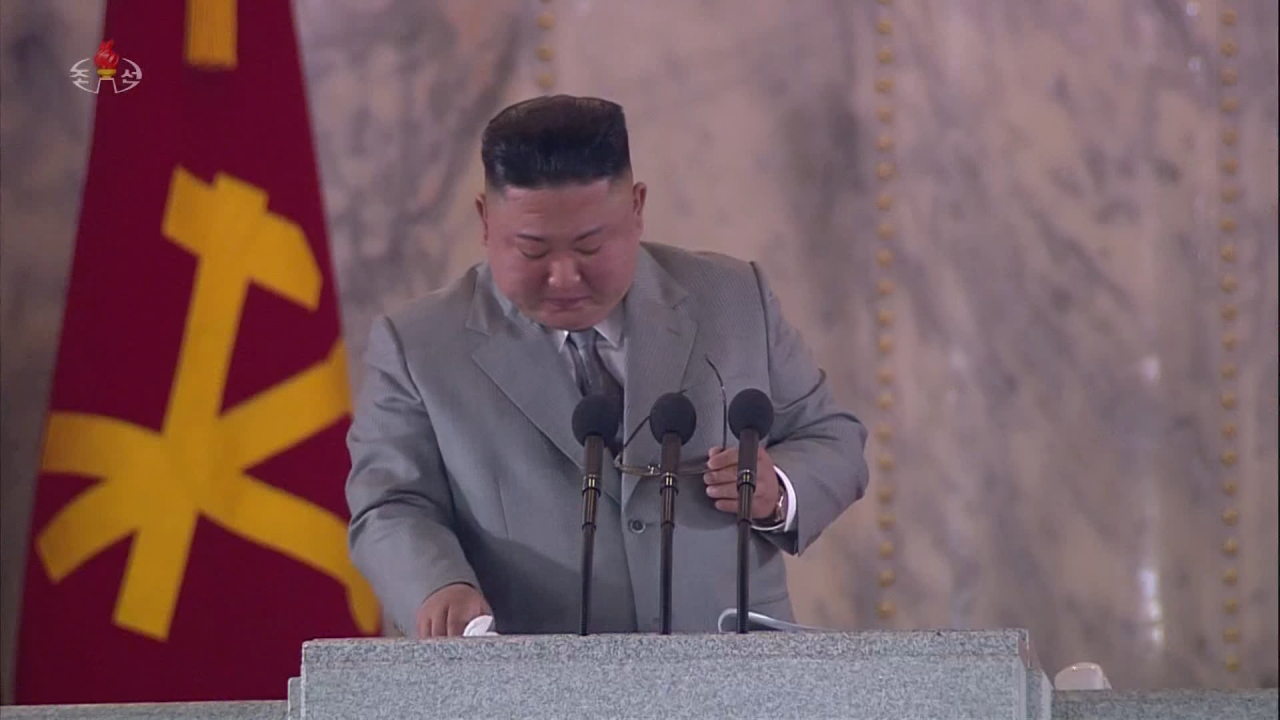 This image taken from North Korean Central TV shows North Korean leader Kim Jong-un taking off his glasses to wipe away tears while he addresses crowds gathered for the 75th year anniversary of the foundation of the country‘s ruling Workers’ Party in Pyongyang on Saturday. (Yonhap)
In a noteworthy moment from North Korea’s massive military parade on Saturday, where the country showcased a new intercontinental ballistic missile, national leader Kim Jong-un got emotional and teared up while recalling the adversity the country’s people had experienced.

Kim stood on the podium to address the nation in kicking off the military parade, which marked the 75th anniversary of the ruling Workers’ Party, in a speech that emphasized “thanking” the people and “apologizing” to them for the hardships of the COVID-19 pandemic, as well as recent typhoons and flooding. During the speech, which lasted around 25 minutes, Kim used the word “thank” around 12 times.

“I thought over what I would say first at this moment when we will be looking back upon every page of our party’s 75-year history filled with glory, but my heartfelt, sincere word for our people is only one, thanks,” Kim told the crowd at Kim Il-sung Square in Pyongyang, in a televised footage. “I thank them for their good health without any one of them having fallen victim to the malignant virus.”

While Kim talked about the challenges the country was experiencing due to the pandemic, Kim was not wearing a mask, nor was anyone else in the crowd, in contrast to the previous public events where officials wore masks. The mask-less gathering, according to the Institute for National Security Strategy, a think tank affiliated with Seoul’s spy agency, may be aimed at showing the North’s confidence of its fight against COVID-19, as Kim also mentioned during the speech that the country has zero COVID-19 cases. The North has been insisting the country remains free of the coronavirus infections, a claim that has been widely disputed by outside observers.

He thanked his people for trusting and supporting him through many ups and downs, while apologizing for not being able to live up to their high expectations. Expressing gratitude, Kim vowed to “serve and struggle” for the people, with the TV footage showing many in the crowd also tearing up.

Kim choked up when he thanked the military for their endeavors in responding to natural disasters and their work to prevent a coronavirus outbreak, saying he felt “pain in my heart” because not all of them could be at the parade due to their anti-epidemic work and flood relief projects.

“They are patriots who deserve to be present here, but they volunteered, after completing their tasks in rehabilitation projects, to other disaster areas instead of returning to Pyongyang where their dear homes are,” he said.

The INSS said Kim’s speech and his tearing up before the crowd may have been intended to show how Kim is a sincere and dedicated leader to his people.

“Kim tries to show that he is a leader of a normal country, through expressions like thank you and sorry to showcase that he is honest and sincere to his people,” said Yang Moon-jin, a professor at the University of North Korean Studies.

“He took responsibility and expressed sympathy for his people’s struggles,” Easley said. “He even offered condolences and encouragement to South Korea over the coronavirus pandemic. But this is still a regime that systematically violates human rights. And rather than take Kim’s words as a hopeful sign for engagement, the South Korean government should be concerned about the advanced conventional weapons displayed at the parade that have Seoul within range.”