[ The Korea Herald – Send E-mail ]
[From the Scene] National Institute of Ecology out to consolidate research, conservation goals in COVID-19 era
The tourist attraction looks to solidify its lesser-known core initiatives while its complex is void of tourists
By Ko Jun-tae
Published : Oct 11, 2020 - 11:54
Updated : Oct 11, 2020 - 16:24 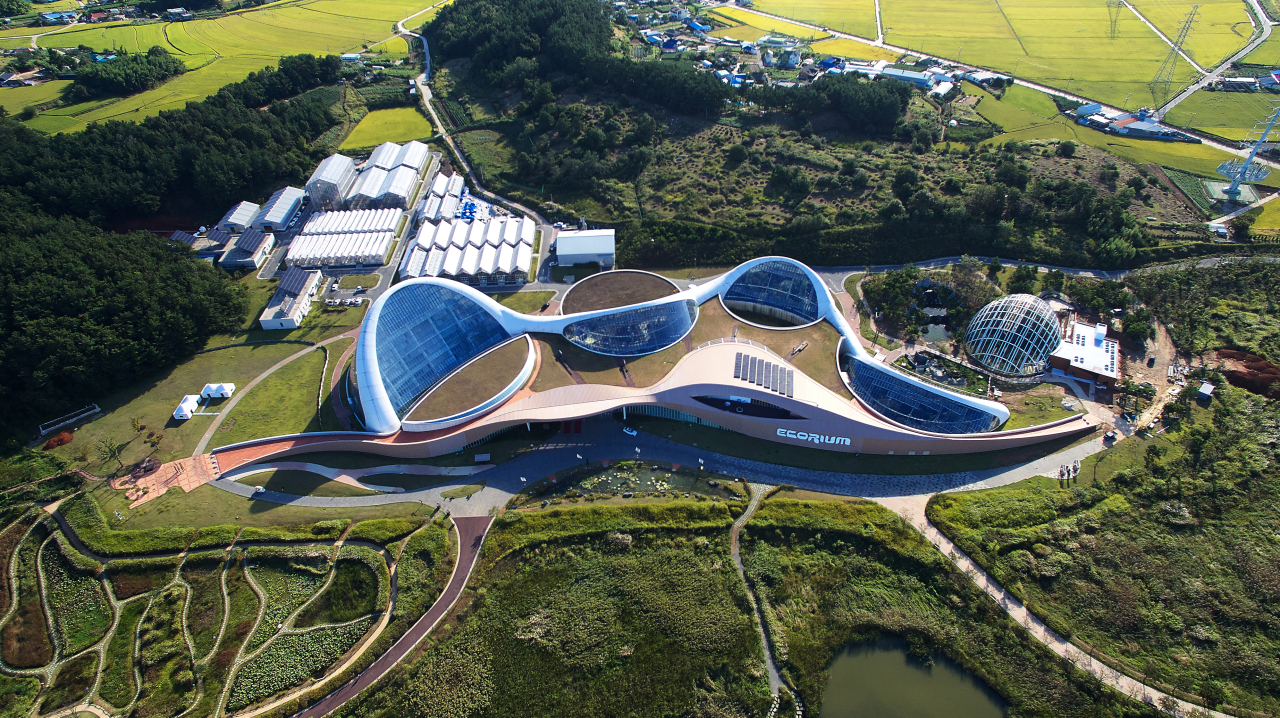 The wildlife center in Seocheon, South Chungcheong Province, attracted 994,966 visitors on its first full year of opening and stayed relatively popular, with 823,826 visitors last year, but for the first 9 months of 2020, the NIE welcomed just 161,834 visitors.

And when The Korea Herald visited on Tuesday afternoon, there were just 22 visitors. In the nearly 1-square-kilometer Eco-park there were more staff than tourists.

“It would have been the busiest time of the year for us if not for the coronavirus,” said Bang Nam-sig, a press official for the NIE, during the tour. “The center is a wonderful attraction for people of all age groups, and I don’t think you can find this much color and vibrancy in many places.”

As the virus outbreak continued, the tourist attraction diverted its attention to the online sphere and has created 80 new multimedia items this year.

In this difficult time, the government-affiliated institute under the Environment Ministry looks to serve roles other than its better known position as a tourist attraction with exotic plants and rare animals like desert foxes and prairie dogs.

It is now focused more on research, conservation and education initiatives.


Betting on the potential of biomimetics

For one, the institute seeks to serve as a fundamental research organization for the field of biomimetics, which entails emulating natural models and elements in solving human problems, and help Korea unleash its hidden economic and industrial opportunities based on the research.

The research field is perhaps best known for Velcro, the adhesive technology that mimics the burs of a burdock plant.

According to a report this year from the Fermanian Business & Economic Institute, South Korea is capable of generating 76 trillion won in economic opportunities and creating 650,000 jobs from fostering its biomimetics competency.

“Korea is fairly late in the game for biomimetics, and we don’t have much to call as a centralized system,” said Kim Ki-dong, head of NIE’s division of ecological information.

“While there were some efforts from other organizations in the past, we officially started researching on this field since 2016 after opening the center.”

Kim said it takes around 21 years for a biomimetics research idea to be fully commercialized, and Korea is in need of a cooperative support model for the government, research institutes and corporations to join in for new ideas.

And within that support model, Kim envisions the NIE providing the basis for companies and research institutions to embark on biomimetics research projects. For that goal, the institute seeks to expand its number of in-house researchers from the current nine to 20.

The center is preparing to apply for patents on ideas that mimic some characteristics of pine cones and birds this year, and has been researching ways to apply its patented drilling technology that copies a type of weevil since last year.

“Countries like the United States and Germany are way ahead of us, and we are really in the basic, basic stage,” Kim added. “It is important to provide continued research support for this field if we really want to gain economic benefits as forecasted.”

To benefit from those already ahead, the NIE also plans to create a shared research database platform for launch in 2024 and actively expand its network with local and foreign experts. The NIE is also open to partnering with companies and individuals interested in the technology, Kim said.

The NIE also seeks to lead the country’s efforts to protect endangered species by opening a shelter next year.

Construction was underway Tuesday for the site of the envisioned CITES Animal Shelter scheduled to open in April 2021. The 5,364-square-meter center will be a place for CITES animals to be fed, sheltered and used for educational purposes.

CITES refers to the Convention on International Trade in Endangered Species of Wild Fauna and Flora, which Korea joined in 1993. The Environment Ministry and its affiliated agencies including the NIE are in charge of monitoring and protecting CITES species.

Of the institute’s collection of 268 animal species and 5,040 plant species, 46 CITES species including desert foxes, prairie dogs and marmosets will be moved to the shelter once it’s complete.

The CITES shelter will also be ready to house and care for up to 1,000 new CITES species until sending them off to qualified animal care institutions. Finance for each animal’s stay will be guaranteed for at least two full years, the NIE said.

“A lot of the time, smugglers are caught with CITES species when entering Korea through airports and harbors, and sadly enough the animals are often discovered in poor health,” said Kim Young-jun, director for the division of zoological research & management at the NIE.

“Personal greed for rare collection of animals without considering the responsibility of providing proper care for them is the biggest problem, and the animals we house could be used to cut the demand for such a market.”

For that purpose, Kim said the CITES animals at the new shelter will appear in public advertisements and campaigns aimed at discouraging people from smuggling or buying CITES species in Korea. The shelter will also be available for the public to visit and learn the dismal outcomes of smuggling animals, he added.

But at the moment, the NIE is in dire need for additional support on top of 6 billion won used for the construction of the shelter.

While the shelter is designed to house up to 1,000 animals, the center could quickly be overpopulated, Kim warned, emphasizing the need to build additional facilities to house those animals.

According to the Environment Ministry, 2,549 cases of illegally raising CITES species were reported in 2015, and Kim believes that number must have risen even further with continued demand for rare animals.

Kim called for additional budgetary support from the government to beef up the team, as the four people on staff won’t be able to manage hundreds of animals at once.