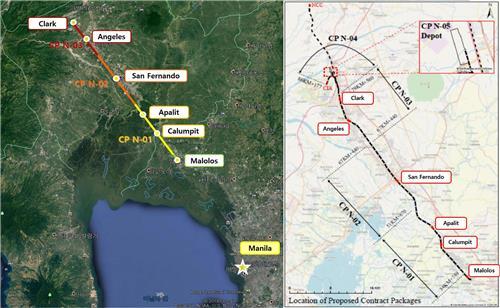 The location of a railway to be constructed over the next four years in the Philippines. (Hyundai E&C)

Hyundai Engineering & Construction said Friday it has signed a $330 million deal with the Philippine transportation ministry to participate in a local railway project.

It is the first time for Hyundai E&C to win a construction project in the Philippines since it won a contract to build the Asian Development Bank headquarters building in 1986.

Hyundai E&C will build two station buildings and a 17 kilometer-long railway on elevated bridges as part of the $573 million Malolos to Clark Railway Project for the next four to five years, the statement said.

The Korean builder expected the latest deal with the Philippine government to help it win other railway projects in the Southeast Asian country. (Yonhap)