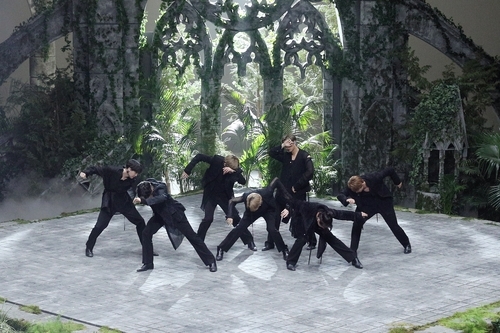 The show's weeklong series running for five days through Friday is designed to showcase different music performances of the seven-member band each night, including live performances, comedy bits and virtual interviews.

"The album mainly carries the grief, happiness and other feelings we have now as they are, so I hope you can count on that," Jimin said during the band's video interview with the show's host on the third night of "BTS Week."

"The album has many tracks that are as good as 'Dynamite,' so I hope many of them can rank in the Billboard Hot 100 (chart)," Jimin added.

The album is set to hit the market on Nov. 20. "Dynamite," one of the album's tracks, was released as a digital single ahead of the full release and topped the Hot 100 chart three times.

Recalling the single's debut on the chart, Suga said, "It was so dreamlike that it was unbelievable even after seeing the chart result."

Asked to comment on the possibility of the band's winning of a Grammy award, the band members said the award, if they win it, might give greater solace and encouragement to fans and other people in this difficult time.

The septet also performed "Black Swan," a track from its fourth full-length album, "Map of the Soul: 7," during the show. (Yonhap)