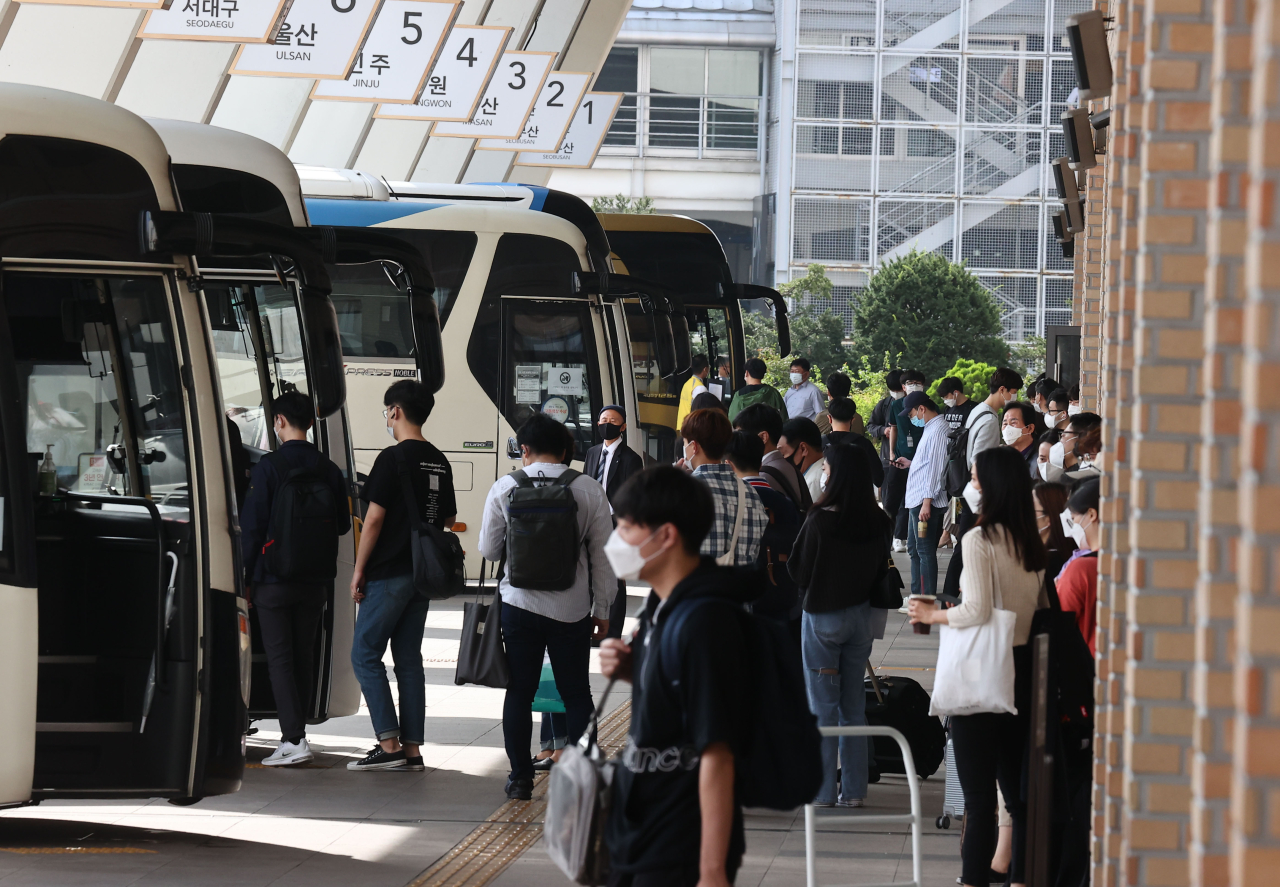 Travellers board buses at a terminal in Seoul on Tuesday. (Yonhap)
The five-day Chuseok holiday begins Wednesday and health authorities remain on high alert as the nation begins its first major national holiday amid the COVID-19 pandemic.

The recent resurgence of coronavirus in Seoul and surrounding regions appears to be stabilizing, but health authorities warn the situation is still precarious, as there are likely to be a large number of undetected virus carriers.

The country added 38 new virus cases on Tuesday, the lowest daily increase since Aug.11, bringing the total caseload to 23,699, according to the Korea Disease Control and Prevention Agency. Of the 38, 23 were local transmission cases.

“Daily new local infections are on a downward trend, and new (local) infections have also stayed in the double-digits for five straight days,” Second Vice Health Minister Kang Do-tae said in a government response meeting. “However, the country should not be at ease (...), in order not to allow another virus resurgence after Chuseok,” he added.

The government has issued special measures for the fall harvest holidays. As part of the measures, the government has urged people to refrain from traveling and engaging in traditional activities such as visiting hometowns and graves of relatives. Traditionally on Chuseok day, which falls on Oct. 1, scattered familiy members gather together for ancestral rites.

The government has also banned large gatherings – 50 or more people at indoor events, and 100 or more for outdoor events - and placed level 2 social distancing rules across the country. Adult entertainment establishments, which have been designated as high-risk facilities, are prohibited from operating until Oct. 4, while restaurants, cafes and other eateries will be required to follow special social distancing rules.

The government has also decided to forgo the holiday exemption of highway tolls in an attempt to discourage traveling. In addition, special measures will be in place at highway rest-stops, including prohibiting eating in at rest-stop restaurants.

Such measures and the government campaign to discourage people from visiting hometowns appear to have had some effect, with a large number of Koreans saying that they will not be doing so this year. According to a survey conducted by Seoul Metropolitan Government, nearly 70 percent of Seoul residents will not be traveling to hometowns.

Despite the drop in people visiting hometowns, travel remains a major concern for the health authorities with large numbers of people expected to visit local tourist destinations. Accommodations in major tourist destinations have reported higher-than-usual reservation rates, and nearly 200,000 people from across the country set to visit Jeju Island over the five-day holiday.

With the Aug. 15 rally led by Sarang Jeil Church having fanned an outbreak that caused a spike of COVID-19 cases in Seoul, the government has banned the rally. However, its organizers claim that prohibiting the rally is unconstitutional and warned that they will carry out a “drive-thru” rally in which protesters will participate from inside vehicles. In response, the government has warned that participants will be given up to 100 penalty points, which could lead to a driver’s license being revoked.