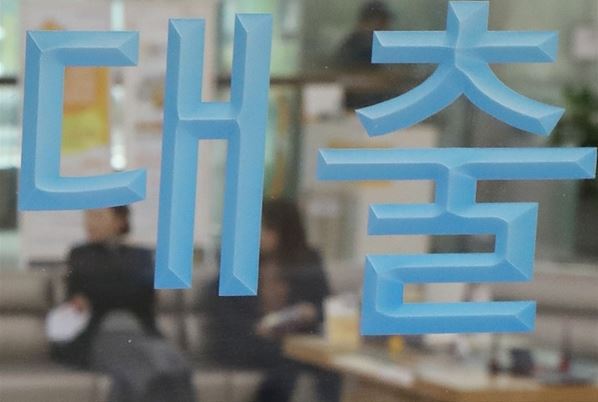 A signboard for loans is seen at a commercial bank branch in Seoul. (Yonhap)
SEJONG -- South Korean households have been taking out an increasing amount of loans to invest in the real estate or capital market over the past few years.

This has been in line with a fever for mortgages or credit-based loans amid low benchmark interest rate, which has stayed under 2 percent per annum for more than five years, and is currently at an all-time low of 0.5 percent.

According to the Bank of Korea, outstanding household debt - the total of financial loans and credit-based payment services extended to households -- reached a record high of 1,637.3 trillion won ($1.4 trillion) in June 2020.

The total has risen by up about 250 trillion won during the first three years of the Moon Jae-in administration, which took office in May 2017.

This data suggests that the Moon administration has failed to put the brakes on the increase in debt that started in the previous Park Geun-hye administration.

Dozens of real estate polices introduced by the Land Ministry and the Finance Ministry to curb speculation, were ineffective or even counterproductive. 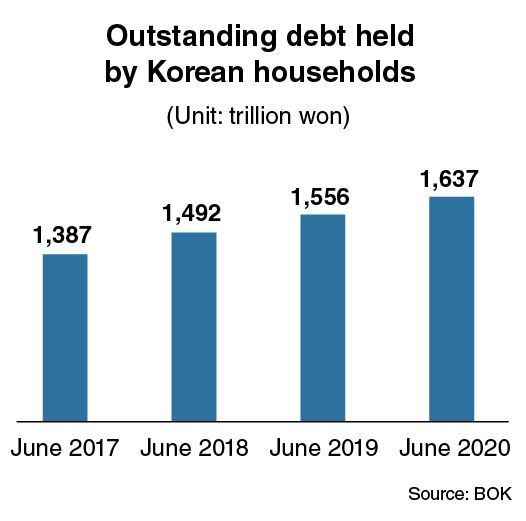 Apartment prices in Seoul have skyrocketed, with some apartment complexes recording 100 percent growth or more in the last three years.

In the latest research from the Organization for Economic Cooperation and Development on the ratio of household debt to net disposal income for 33 members, South Korea ranked eighth. The OECD compared 2019 or 2018 figures, while it did not include data for four of its 37 members -- Iceland, Israel, Mexico and Turkey.

Korea saw the ratio of household debt to disposable income reach 184 percent, a growth of about 30 percentage points compared to 2010.

Only seven countries posted higher that Korea, all of which -- Denmark, Norway, the Netherlands, Switzerland, Australia, Sweden and Luxembourg - had higher per capita GDP than Korea.

The ratio of household debt-to-income in Korea grew rapidly over the past few years and is heading toward the 200 percent mark, which would mean debt is doubles their disposable income

Meanwhile, some financial market insiders say that Korea’s outstanding loans to households are estimated to have already exceeded 2,000 trillion won, if the 600 trillion won of loans extended to the self-employed is included.