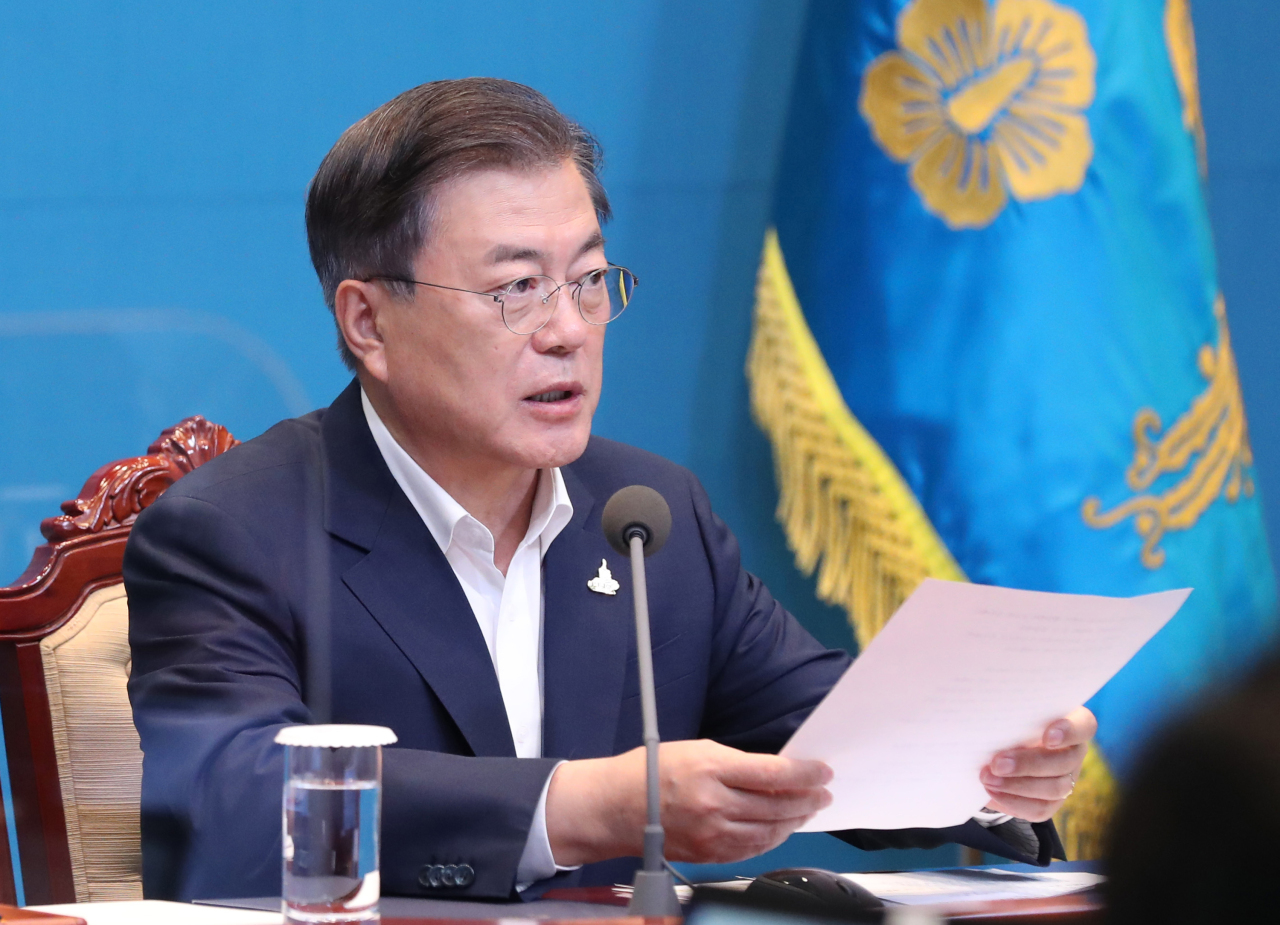 President Moon Jae-in presides a weekly meeting with his senior aides at Cheong Wa Dae on Sept. 28, 2020. (Yonhap)
President Moon Jae-in on Monday offered an apology to the people of South Korea in response to the shock and fury caused by the killing of a South Korean government official last week by North Korea, his office said Monday.

He also expressed his condolences to the family of the civil servant who was shot dead on Sept. 22 by the North’s troops after drifting into the country’s waters.

“The shock and rage the public felt can easily be expected. The government, which should defend the safety and lives of the people, expresses a deep apology,” President Moon Jae-in said at his weekly meeting with senior aides.

While saying that the government will step up efforts to defend peace and national security, Moon said that North Korean leader Kim Jong-un’s apology is significant.

Last week the North sent a statement detailing its account of the slaying of the civil servant, along with an apology from Kim.

“It is a clear sign that the North does not want inter-Korean relations to reach a point of no return,” Moon said.

“In particular, I consider Chairman Kim Jong-un expressing an apology to our people to have special significance. The North Korean leader apologizing is an unprecedented event.”

At the meeting, Moon also urged the North to resume inter-Korean relations, and to reengage the military communications line between the two countries.

In June this year, Pyongyang blew up the inter-Korean liaison office near the border seven days after it cut off communications with Seoul to protest anti-Pyongyang leaflets flown there.

The military hotline as of Monday remains disconnected, with a Seoul official saying, “It’s still off on the other side. It has to be on if we want to reach Pyongyang.”

The North remains silent on the South’s request for a joint investigation, the Unification Ministry here said.

Before Cheong Wa Dae officially proposed the probe on Sunday, the North warned the South not to intrude into its waters in search of the official’s body, saying it was conducting a search on its own.

“The Unification Ministry is looking at the current situations very seriously and reviewing them carefully, while closely watching for an additional response from North Korea,” Yoh Sang-key, the ministry’s spokesperson, told a regular press briefing.

Meanwhile, the military here tried to explain what it had done between the time it learned of the missing official’s discovery by the North in its waters and the time it learned of his death. Opposition parties slammed Moon’s office, the military and related authorities for inaction that they say resulted in the loss of an innocent civilian at the hands of North Korean troops.

“Initially there was a sign that the North was trying to rescue him,” a senior military official said, adding, “But then everything changed,” referring to the North’s shooting.

The official declined to release a closer account of the events at the time, but it said it would cooperate with the Coast Guard, which is investigating the case, to establish if the official was making a defection and if the North indeed incinerated his body.

Seoul and Pyongyang disagree over those two points; the South maintained the man was defecting via sea and that he was burned after death, while the North described him as an intruder. The North admitted to shooting him, but said it burned the object he was floating on, not the body, which they said was lost.

Earlier in the day, South Korean Prime Minister Chung Sye-kyun urged the North to agree to a joint probe, saying that would bring a closure to the latest flare-up in tensions.

“The North Koreans have thrown a wet blanket over the inter-Korean ties that were on the brink of a thaw,” Chung said. “But we can’t let this be another hurdle if we want to go about making peace.”