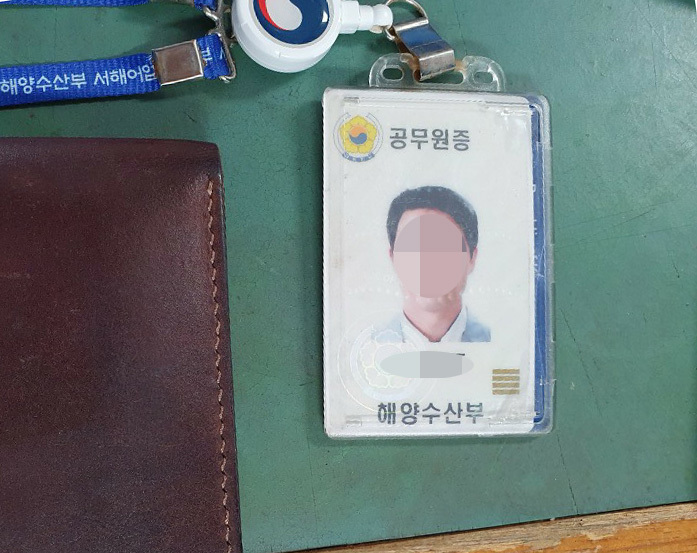 (Courtesy of the civil servant's brother)
The South Korean public official who was shot to death by North Korean officials Tuesday after going missing near the inter-Korean maritime border reportedly left no traces suggesting he may have intended to defect to the North.

The Incheon Coast Guard said in a press briefing Thursday that the civilian did not leave any will or evidence of a planned defection to North Korea.

The Coast Guard said it didn’t find his cellphone or any notes in the small cabin of the boat the civilian was on before he went missing.

The phone was turned off when the Coast Guard checked at 1:19 p.m. on Monday upon learning that he was missing.

The Coast Guard found the man’s small notebook, wallet, clothing and shoes on the boat, and were looking into his phone records and financial accounts.

The two security cameras installed on the boat used for guiding fishing boats in the area had been out of order since Sept. 18, according to the Coast Guard.

The man’s coworkers said he was hard-working and they never heard him saying anything suggesting interest in North Korea.

The Coast Guard, nevertheless, said they could not rule out the possibility that he may have intended to defect, pointing to the fact that his shoes were left on the boat, and that he was familiar with the currents around where he worked to guide fishing boats.

Three investigators from the Incheon Coast Guard and two police officers from a substation on nearby the island of Yeonpyeongdo looked around the boat – Mugunghwa 10 – floating in waters off Yeonpyeongdo on the West Sea on Thursday morning.

The dead man’s elder and younger brothers watched the search from another boat nearby.

The elder brother said in a radio interview Friday morning that the possibility the deceased inadvertently fell off the boat should not be ruled out.

“He had been on that boat for only four days, which is not enough time to be completely familiar with the boat under changing situations. As he is about 180 centimeters tall, the railings on the boat must have reached about his thighs, so there is a chance that he fell over the railings,” the brother said.

“Because the seawater always flows onto the boat, he could have taken off his slippers for a while in case they get wet. The fact that his shoes were neatly kept doesn’t necessarily mean that he intentionally jumped into the water.”

He also said the waters where his brother went missing are very rough compared to other regions as there are many reefs around Yeonpyeongdo, making the water depths vary greatly.

“The military suspected that he must have gone to the North carried by tidal currents, but that would be possible only between 11:30 a.m. and 1 p.m. on Monday when he was reported missing. This, however, is a time when he could easily be seen by the countless fishing boats, military and Coast Guard boats passing through the area,” he said.

“I think he went missing between 2 and 3 a.m. on Monday, which is when the tidal currents flow toward (the South’s island) Ganghwado. Had he intended to go North, he would never have chosen that time.”

Noting that he is aware that his brother had debts and that it is true that he was divorced, he never heard about the deceased in online gambling as has been reported.

“The military is saying he is likely to have defected, because they are responsible for failing to find him. He must have drifted on the sea for at least 24 to 28 hours, and they failed to detect him,” the brother said.

“I want to know why they did nothing when he was (getting killed) in the North.”

The deceased was a member of the West Sea fishing guidance and management squad under the Ministry of Maritime Affairs and Fisheries. He became a public official in 2012.

The Mugunghwa 10 left Mokpo, South Jeolla Province, on Sept. 16, but the deceased went on board the next day near Yeonpyeongdo.

He went missing about 2.2 kilometers south of Yeonpyeongdo four days later on Monday.

He went aboard Mugunghwa 10 upon being moved from another boat that he worked on for three years.

The military and intelligence authorities said earlier that he drifted to North Korean waters as he attempted to defect, and was shot to death by the North on Tuesday.