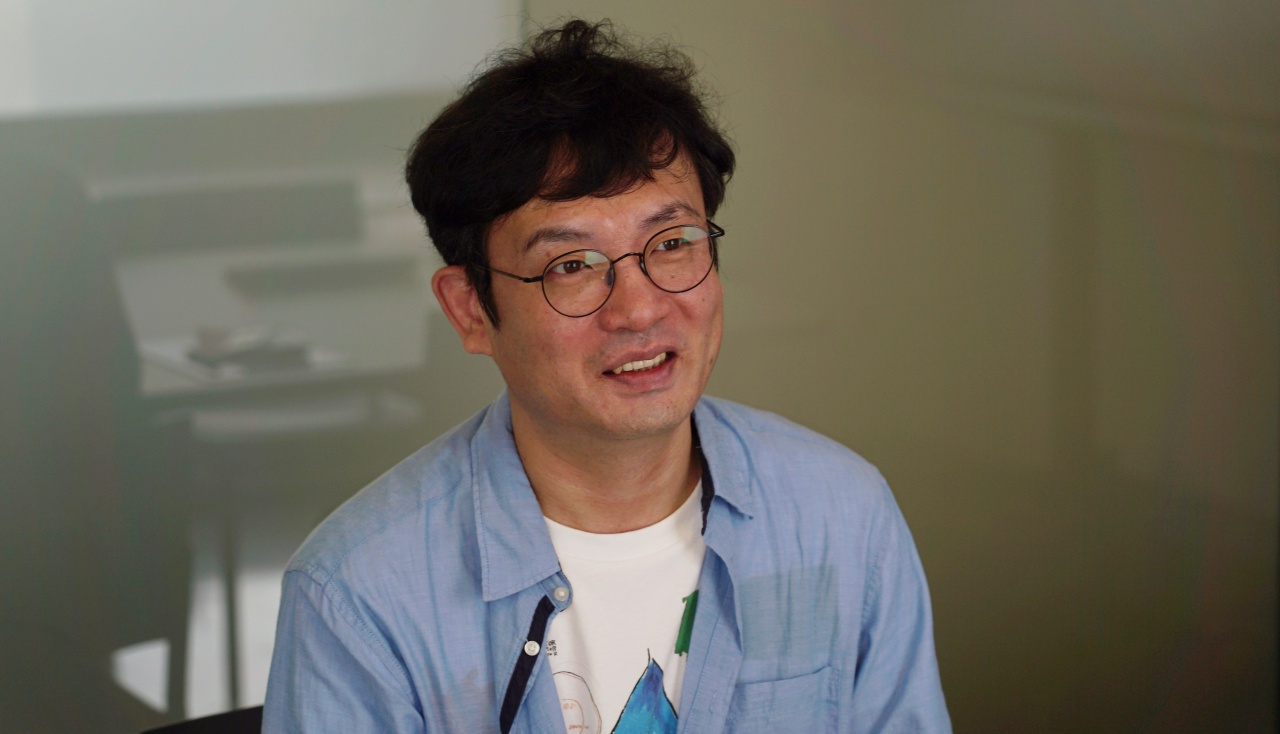 Pianist Kim Cheol-woong (Im Eun-byel / The Korea Herald)
Not much is known about North Korea, let alone its music scene.

The few things known about North Korean music concern its propaganda, hailing the ruling Kim dynasty, and state-led acts such as the Moranbong Band and Samjiyeon Orchestra.

According to pianist Kim Cheol-woong, 45, who defected from North Korea some two decades ago, such perceptions are partly true and partly wrong.

“Western music before the 20th century can be played freely. However, those after that must be screened by the authorities,” Kim told The Korea Herald during an interview held recently in Seoul, explaining that state orchestras in the North perform Western classical music, too.

“But it is true, every type of music is censored, and it is not easy to practice music that does not carry a propaganda message,” he said.

Kim, often referred to as the pianist from the North, is also a professor at Seoul National University of Education and a North Korean human rights activist. 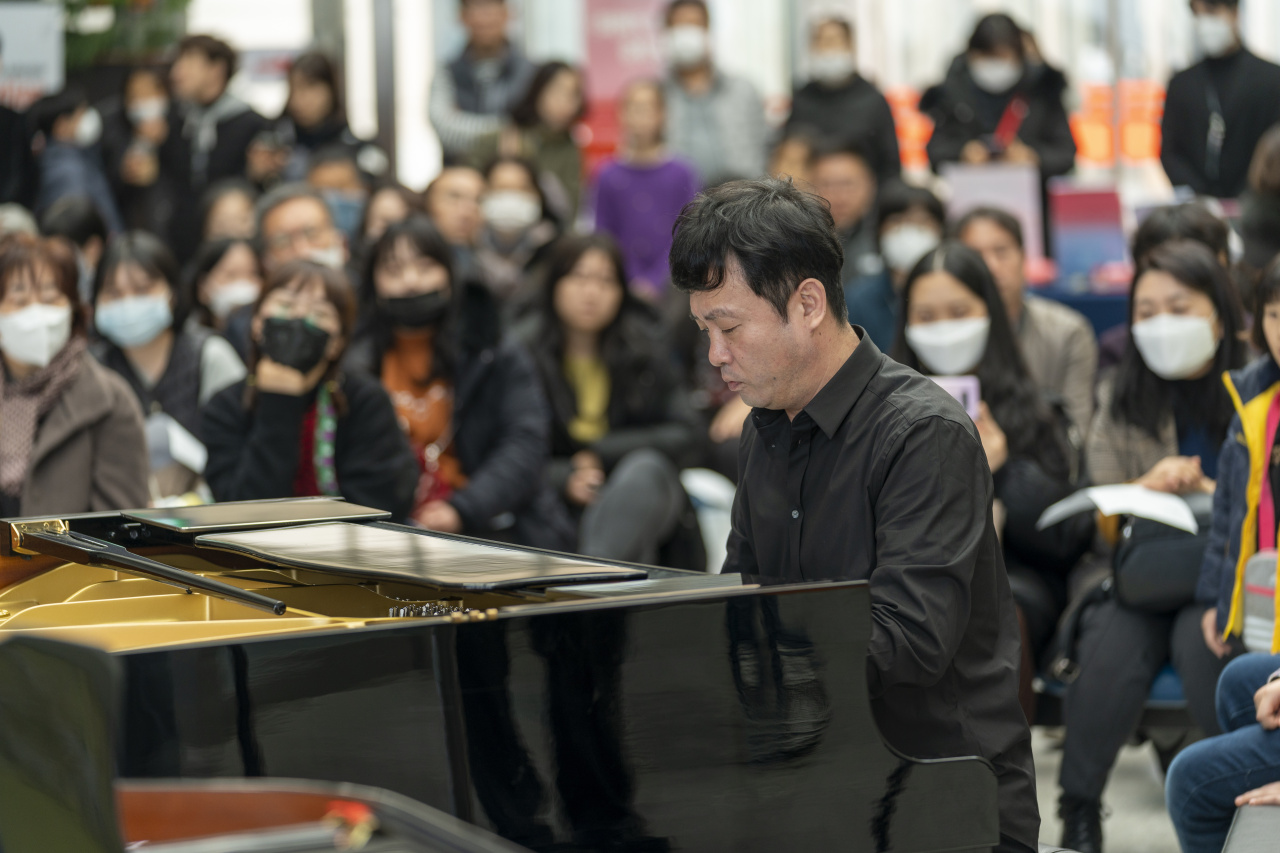 Pianist Kim Cheol-woong plays the piano at DMZ Museum in Goseong, Gangwon Province, on Feb. 22 during the winter edition of Music in PyeongChang 2020. (MPyC)
Before crossing the border, Kim had a promising career as a pianist in North Korea. A graduate of the prestigious Pyongyang University of Music and Dance, he won a prize at the 10th International Tchaikovsky Competition in Russia in 1994. South Korean maestro Chung Myung-whun had two decades earlier been the joint second-prize winner in the 1974 International Tchaikovsky Competition.

Supported by his elite parents -- his father a party official and his mother a professor -- Kim studied at the Moscow State Tchaikovsky Conservatory Academic Music College. After studying in Russia, he joined the Pyongyang National Orchestra at the age of 25 as its youngest principal pianist ever.

Kim’s defection happened unexpectedly. Someone overheard him practicing French pianist Richard Clayderman‘s “A Comme Amour” for his girlfriend and reported him to the Ministry of State Security. Thinking that his career as a pianist in the North was over, he fled to China in 2001.

“I was fed up with practicing music for propaganda. All music in North Korea must carry a socialist message. Though a classical music pianist, I was told to play Beethoven for my country,’” Kim said.

“It was a recital that I could not even dream of in North Korea,” he said.

Since coming to South Korea in 2003, Kim has been performing across the world as a concert pianist, including the Carnegie Hall debut in 2009, and the performance with the London Philharmonic in 2005.

Even off the stage, Kim has been sharing his insight of the music scene under the totalitarian regime. At first, he was surprised when people asked him whether North Koreans can enjoy classical music or not.

“People in South Korea should be educated more about unification and North Korea. They do not know much about the North. Of course, I understand it is hard to access information about North Korea. But this gap -- not just in politics, economics but also culture -- will be an obstacle for the two Koreas in the future,” he said.

According to Kim, the music scene in North Korea has been changing, too: The regime is allowing more popular music these days.

“Even though North Korea is a totalitarian regime, it does concern itself with satisfying the needs of its people. This is reflected in the music,” he said.

To share his insight with more people, Kim has been hosting a concert every year since 2013 where music from the two Koreas is performed. This year’s concert has been canceled due to the virus pandemic. However, next year’s concert will be held at the Lotte Concert Hall in eastern Seoul in July.

“In the last 20 years or so, the relationship between two Koreas has not changed much, but still progress has been made. People are looking at North Korea and its people with a warmer gaze now. I can feel it,” he said.

Though an unofficial ambassador of peace between the two Koreas, Kim sometimes feels frustrated with the title.

“I am a pianist before I am a defector. I came here to do my music. But North Korea is like a tag that I cannot get rid of. People ask me, ‘When will Korea be united?’ I have no idea, I am just a pianist.”

Rather than diving into the political issues regarding the North, Kim rather hopes to approach the unification issue from a musical aspect. Traditional Korean music can unify the two Koreas, Kim said.

“North Korea values ethnicity, even in music. State-led modernization of traditional music was made in the 1970s. In South Korea, traditional music is something to be preserved, not very appreciated by the wider public. It is more of an old art form from the past,” he said.

“North Korea should take a few steps backward and South Korea should try to move forward when it comes to traditional Korean music,” he said. “But we share the roots. That is what matters.”

Like any other musician across the world, Kim’s schedule for 2020 has been suspended due to the virus pandemic. More than 30 performances have been canceled or postponed. During the hiatus, he is focusing on widening his repertoire to encompass jazz music.

“These days, I am interested in American pianist George Gershwin’s composition ‘An American in Paris.’ How about a Seoulite in Pyongyang, or the other way around? As a person from Pyongyang in Seoul, I wonder what it would be like if a person from Seoul travels to Pyongyang.”