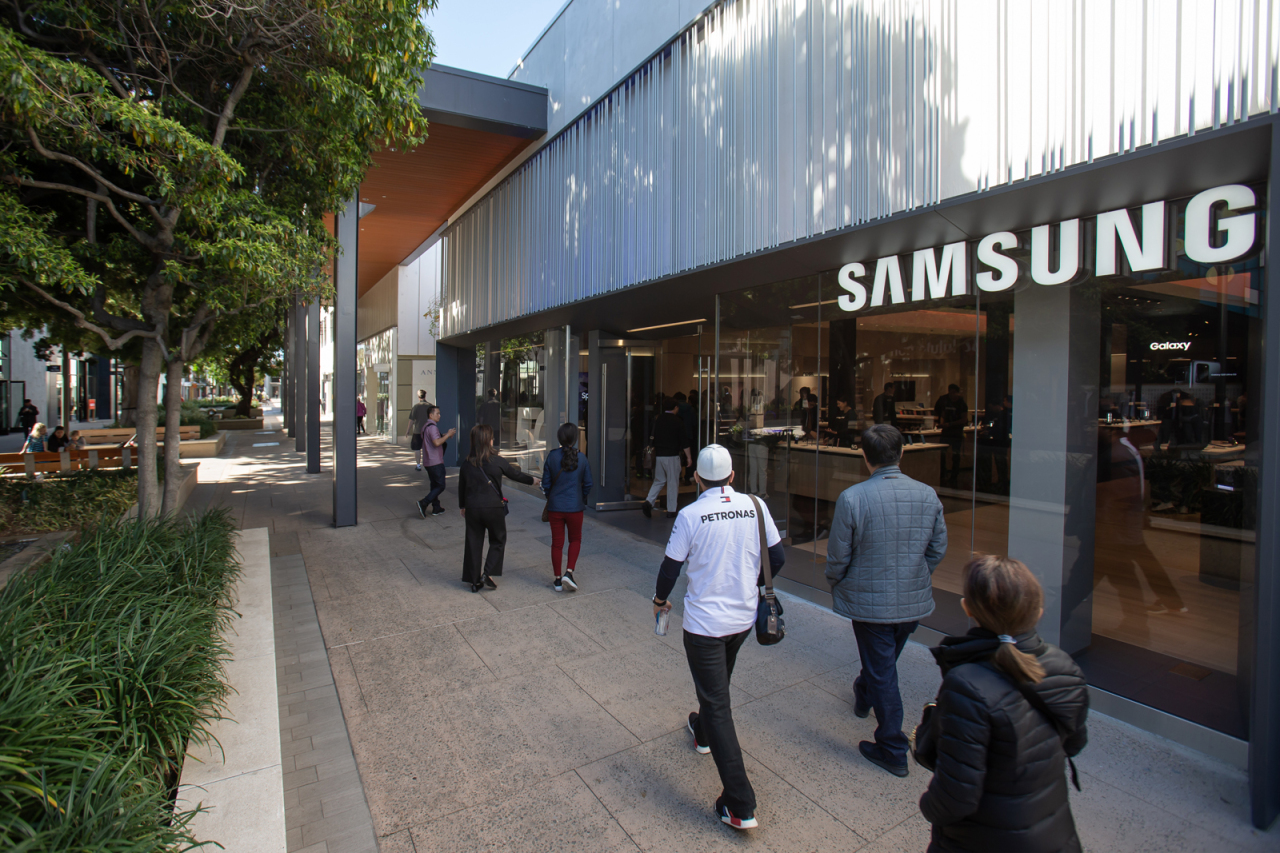 People pass by a Samsung shop in Palo Alto in February.(Samsung Electronics)
South Korea’s tech industry is forecast to report a better performance in the third quarter than the second, owing to pent-up demand amid the ongoing COVID-19 pandemic, according to financial sources on Sunday.

Industry bellwether Samsung Electronics is expected to post over 10 trillion won ($8.58 billion) in operating profit in the July to September period, which would be up about 32 percent from the company’s Q3 operating profit last year.

“Samsung’s mobile business is predicted to gain about 4 trillion won in operating profit due to favorable sales of the latest Galaxy Note 20 series released in the third quarter,” a financial source said.

The last time Samsung posted a quarterly operating profit of 10 trillion won was the fourth quarter of 2018.

Some noted tech companies will save money they would otherwise spend on offline marketing activities during the global lockdowns in the third quarter, and this may lead to increased profits.

Pent-up demand, a buildup of demand for goods and services in an economy where consumers are unable to make purchases, was strong in the TV and home appliances market in the third quarter, industry officials say.

Both Samsung and LG benefited from pent-up demand at home and abroad over the past three months after lockdowns were eased.

Samsung’s consumer electronics unit is expected to post 1.2 trillion won in operating profit, its highest point since the first quarter of 2016, according to projections from Eugene Securities.

The company’s Q3 operating profit is forecast to increase about 7 percent to 838 billion won from the same period last year.

Compared with the second quarter, LG’s Q3 operating profit is up by a whopping 70 percent.

The semiconductor industry enjoyed unsolicited gains from the US sanctions on China’s Huawei, which prevent the Chinese tech titan from supplying chips starting Sept. 15.

Both Samsung and SK hynix saw increased chip purchases from Huawei ahead of the implementation of the restrictions.

While Samsung’s chip division is estimated to see a Q3 operating profit of around 5 trillion won, SK hynix is expected to achieve 1.2 trillion won.

The display sector is expected to show some signs of recovery upon increased TV sales.

Samsung Display is projected to obtain 300 billion to 400 billion won in Q3 operating profit, while LG Display is expected to swing back into the black.