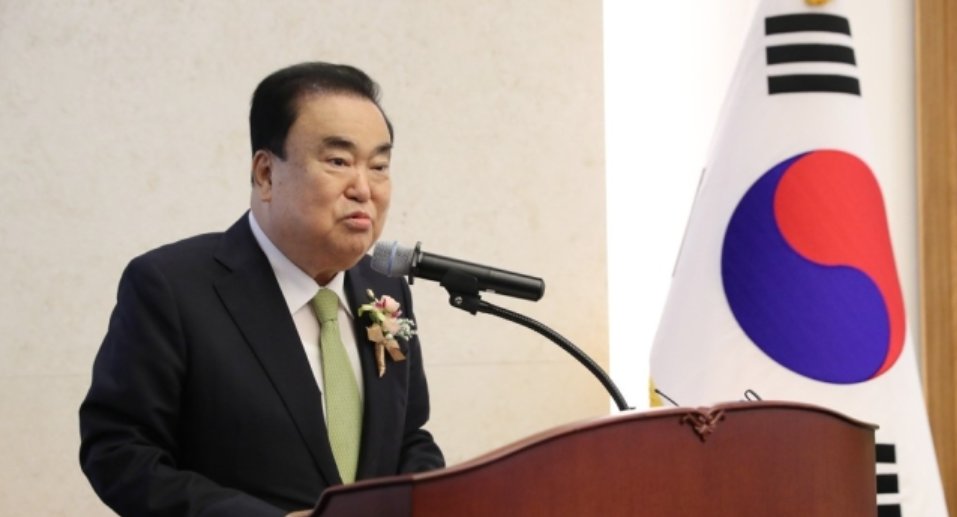 Moon Hee-sang. (Yonhap)
Former South Korean National Assembly speakers are urging Seoul and Tokyo to mend ties, saying that allowing bilateral relations to remain in their current state is detrimental to both countries.

In an interview with a local diplomacy journal, four former National Assembly speakers -- Chung Ui-hwa, Moon Hee-sang, Lim Chae-jung and Kim Hyung-o, who served in the role between 2004 and 2020 -- said Korea-Japan relations must not be allowed to continue on their current course and proposed ways to improve the situation.

“The leaders of both countries would be irresponsible (to allow the current situation to continue), and it is damaging to the people of both countries,” Moon said in the interview, saying that neglecting Seoul-Tokyo ties would only cause harm.

Moon is a former ruling Democratic Party lawmaker who served six terms in the National Assembly and held the post of speaker between 2018 and 2020.

“If (the two sides) do not begin to resolve the matter immediately, they would be committing a grievous crime in the face of history.”

Seoul-Tokyo relations have deteriorated since the inauguration of President Moon Jae-in in 2017 over a range of issues including the sexual enslavement of Korean women by Japan during World War II and the use of Koreans as forced labor at Japanese companies during Japan’s occupation of the Korean Peninsula in the first half of the 20th century.

Unresolved historical issues have led Korean courts to order the seizure of Japanese firms’ assets to compensate victims for damages. This led Japan to retaliate with trade restrictions that in turn put a military intelligence-sharing pact between the two countries in jeopardy.

Lim, National Assembly speaker from 2006 to 2008, stressed that Japan must recognize its war crimes and apologize, and that Tokyo must not be allowed to whitewash its occupation of Korea.

In contrast, Chung, a former conservative lawmaker and National Assembly speaker from 2014 to 2016, said a change in Korea’s stance is necessary for relations to improve.

“In the past, Japan has done many evil deeds, but we must also take a position of forgiveness and reconciliation in the present day,” Chung was quoted as saying.

Saying that while Korea’s claims are important, the country must try to understand Japan’s position.

“We must become a country that is better than Japan in all ways. That is a beautiful revenge against Japan.”

Kim, a conservative who held the speaker’s post from 2008 to 2010, said Korea stands to sustain massive damage.

“The longer the discord in Korea-Japan relations continues, we will sustain massive damage in almost all areas including diplomacy, national security, economy, industry, science and technology,” Kim said. Citing an idiom that goes, “A knot must be untied by the one who tied it,” Kim urged the two countries to work together to resolve the matter and warned against using anti-Japanese sentiment for political gain.

“The structure (of Korea-Japan relations) is that we can’t but sustain bigger damages but (politicians) are fanning petty anti-Japanese sentiments for domestic politics,” Kim said, going on to say that such actions would come with a price.