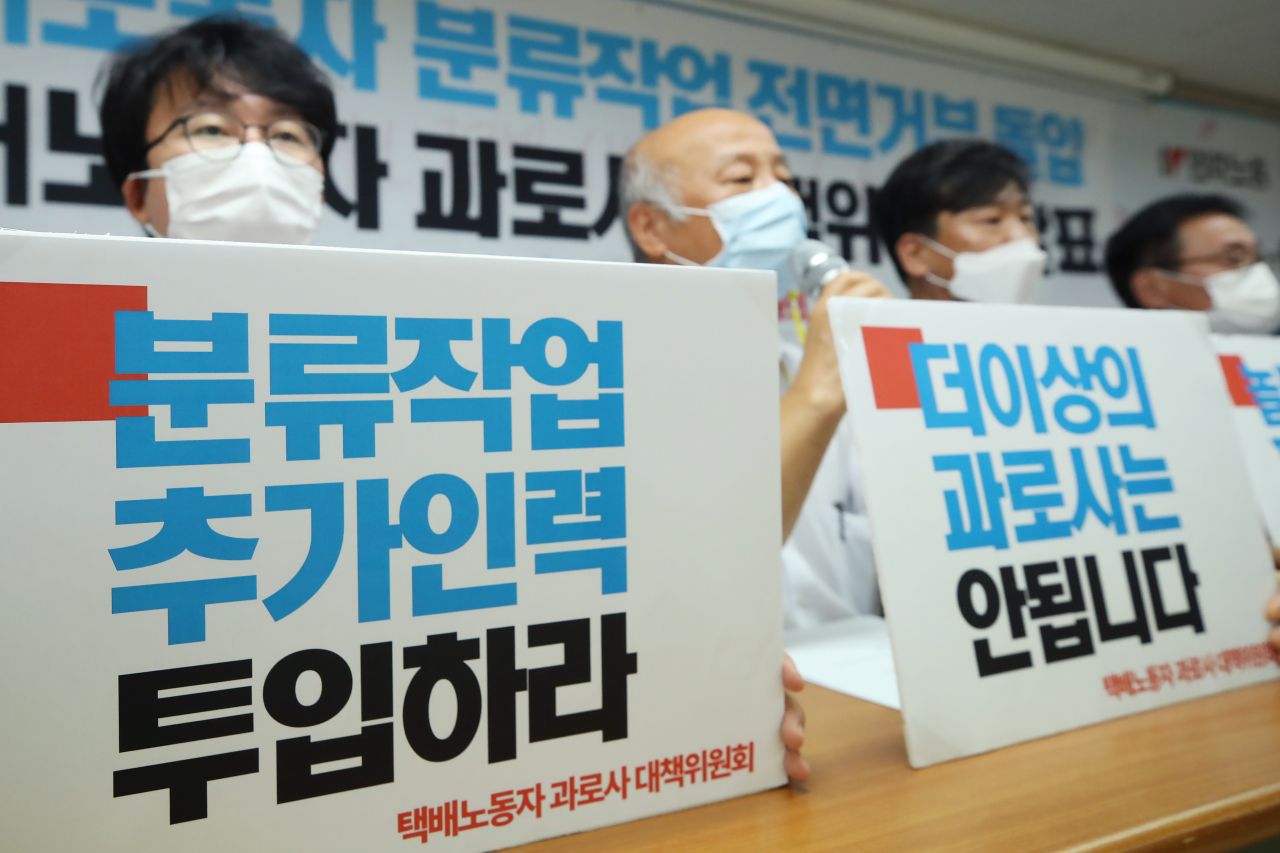 (Yonhap)
Over 4,000 delivery workers nationwide will refuse to sort the parcels from Sunday until their employers hire more people as delivery volumes pile up ahead of Chuseok next week.

“The sorting part of the job is the biggest reason delivery workers report to work at dawn and have to deliver until late night,” a committee of labor and civic groups committed to preventing deaths of courier servicemen due to overwork said in a press conference on Thursday.

“They sort the parcels for nearly half of their work hours, which is between 13 and 16 hours a day, and do not get paid for the sorting.”

The committee held a vote among courier service workers from Monday through Wednesday, and a total of 4,160 people, or 95.5 percent of those who voted, concurred with the plan to refuse the sorting work.

About 500 of the voters were not members of the union, showing that many people are worried about delivery workers dying due to overwork, the committee said during the press conference held at the office of the Korean Confederation of Trade Unions in downtown Seoul.

The Ministry of Land, Infrastructure and Transport recommended companies in the parcel delivery business temporarily hire more people ahead of the Chuseok holidays, when delivery volumes peak.

President Moon Jae-in also asked for more attention on the issue of overwork for courier service workers on Monday.

“The whole society is concerned about overwork killing delivery workers, and calling for additional manpower to do the sorting, but the companies are refusing to see or hear any of this.”

Major parcel delivery companies such as CJ Logistics, Hanjin, Lotte and Logen hire some 40,000 people who deliver parcels to the doorsteps of millions of Koreans who order everything from diapers to bikes online.

Although only about 10 percent of the total number of delivery workers agreed to refuse the sorting work, if they go ahead with the plan to stop sorting, it is likely to cause delays in delivery to certain regions.

“We are sorry to cause concerns for the (Korean) people,” the committee said.

The committee added that if the logistics companies come up with effective measures to prevent deaths due to overwork, they can always call off the plan to not do the sorting, and sit down for talks.

Parcel delivery workers have called for better working conditions for years, but not much has changed.

CJ Logistics, the biggest company in the business, saw their operating profit for the first half of this year surge 21.3 percent from a year ago as more people stayed home due to COVID-19 and ordered more things.

South Koreans enjoy possibly the world’s best parcel delivery service, with some online shopping platforms offering same-day delivery dubbed “rocket delivery” which has packages delivered to a customer just hours after the order is made.

Delivery workers get paid around 700 or 800 won (59 to 98 cents) per parcel. Many of them deliver more than 400 parcels a day on average. They spend about four to five hours each day sorting packages and loading them into their vehicles. They leave around lunchtime and have to deliver a package every minute if they plan to deliver over 400 items a day.

Twelve delivery workers are believed to have died due to overwork in the first half of this year.

Countless news reports told the stories of delivery workers who died because they couldn’t rest or go to the hospital because of the severe working conditions.

Because delivery workers are not legally recognized as regular workers, they do not get days off or overtime pay and are outside the boundaries of the labor law that caps work hours at 52 hours a week.

If delivery workers get sick and can’t work, they have to pay about 1,200 won per item to get someone else to do the job.