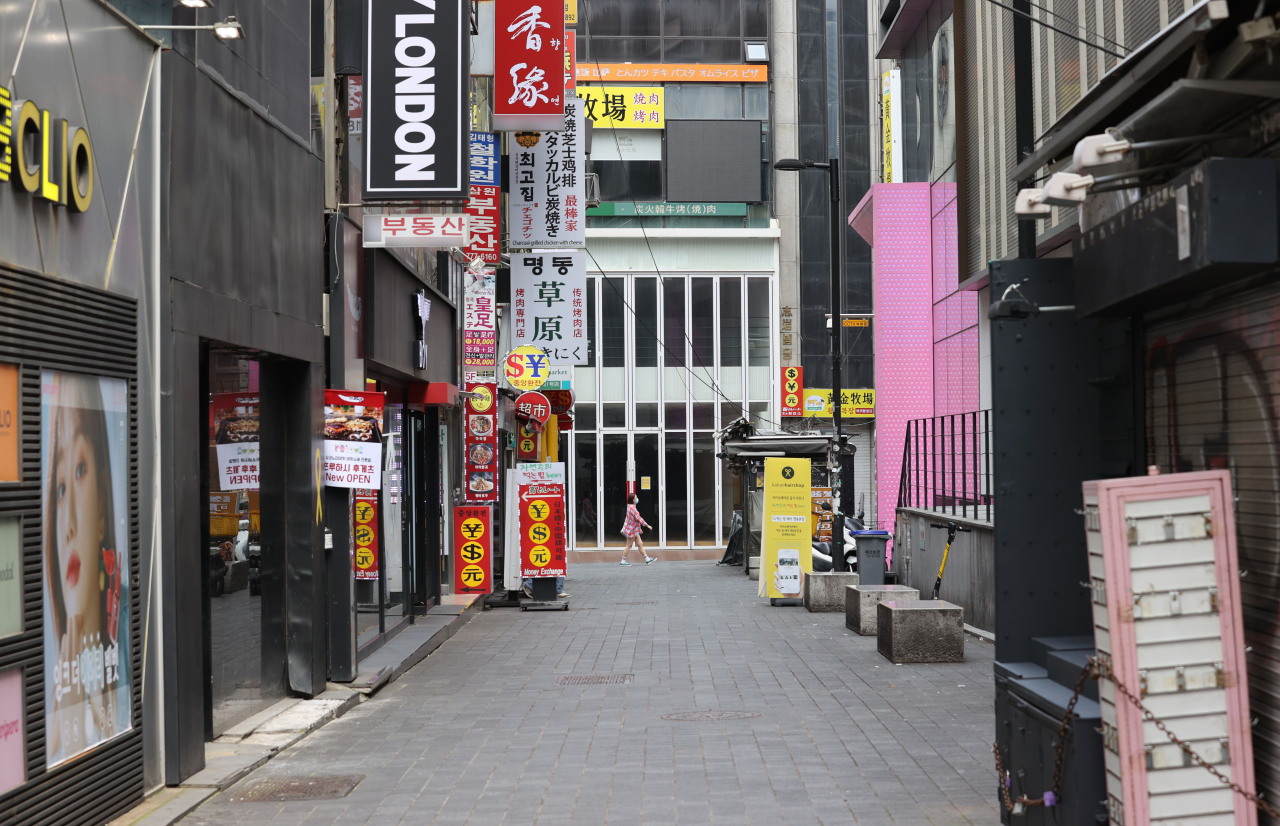 Street appears empty in Myeong-dong, a tourist district in central Seoul, on Monday afternoon. (Yonhap)
South Korea now stands at a coronavirus crossroads. It must quickly decide whether reintroducing intense physical distancing is necessary, as infection numbers rise again to initial levels seen nearly half a year ago.

With public health authorities anticipating a worse trajectory this time, talks of mitigation actions akin to a lockdown are being floated.

The anti-virus scheme of an unprecedented intensity will come at heavy economic costs, according to some forecasts.

The Bank of Korea’s Aug. 18 report said “a job crisis of a significant magnitude” may be on the horizon if the country were to withstand a lockdown. The report said about 35 percent of all jobs are “nonessential, low-skilled positions” or in a sector that cannot telecommute.

For most, the economic wounds from March and April when the country went into “intensive” physical distancing are still fresh.

A 30-year-old cafe owner in Siheung, Gyeonggi Province, said she was already experiencing a decline in customers since the infection clusters at cafes.

“Food businesses are struggling as it is,” she said.

A 28-year-old who works in a film distribution company said he saw little to no projects during the months the distancing orders were in place.

“I don’t think the smaller companies will be able to survive another phase of social distancing,” he said.

President Moon Jae-in said on Monday that “failing to stem the spread at this stage would mean having to step up the restrictions.”

“This will translate to life coming to a stop and a devastating toll for the economy,” he said, urging people to heed the safety protocols.

Only 35 percent of all coronavirus beds in the capital were available as of Sunday, data showed. A Seoul woman in her 70s died at her home Thursday waiting to be admitted, marking the first such death since the earlier peak. At least five people had died without ever receiving care in Daegu, the former epicenter of the country’s epidemic, due to bed shortages there.

Health pundits say the resurgence is projected to be even tougher to contain.

Infectious disease specialist Dr. Kim Woo-joo of Korea University Hospital in Guro, southern Seoul, said that unlike in Daegu, where the vast majority of the cases were found among followers of the Shincheonji church, the recent spike has been characterized by “multifocal outbreaks” across the country.

“Outbreaks of varying sizes are occurring all over now, rendering them harder to trace,” he said. For over one-fifth of cases confirmed last week, the point of infection was unknown.

Despite counting 11 straight days of triple-digit daily numbers, the Korea Centers for Disease Control and Prevention says this is only the beginning of a further jump. Leading the state health agency, Jung Eun-kyeong said in a briefing there may be a “substantial proportion of undetected cases in the capital.”

Sociologist Chang Duk-jin, who sits on the government’s advisory committee for coronavirus policies, said the country faces “an unfortunate trade-off between health and the economy.”

He said based on indicators such as the daily average of between 100 and 200 cases and a reproduction rate of around 2.8, the situation warrants a stricter response. But that needs to be accompanied by measures to cushion the blow for society’s more vulnerable.

“Workers with part-time or temporary contracts who are more prone to be hit by job losses, as well as high-risk establishments that are being ordered to restrict operations should be a priority in getting government cash grants,” he said.

Economics professor Ahn Dong-hyun of Seoul National University suggested that a better way of spending the relief funds may be to pay people to stay home while the country is under lockdown, instead of encouraging them to dine out and travel -- activities which go against the coronavirus guidance -- as did the earlier cash payouts to households.

“If we want to keep people at home and out of the workforce, we should be giving them financial incentives that can create enough of a safety net,” he said. “The economy cannot function in any meaningful way unless the coronavirus is under control.”

Preventive medicine specialist Dr. Ki Mo-ran said imposing forms of lockdown should be “the last resort,” and that they should be saved for a potentially bigger wave later in fall and winter.

“The best way out is for people to socially distance and wear face masks voluntarily without having to shut down parts of the country,” she said.