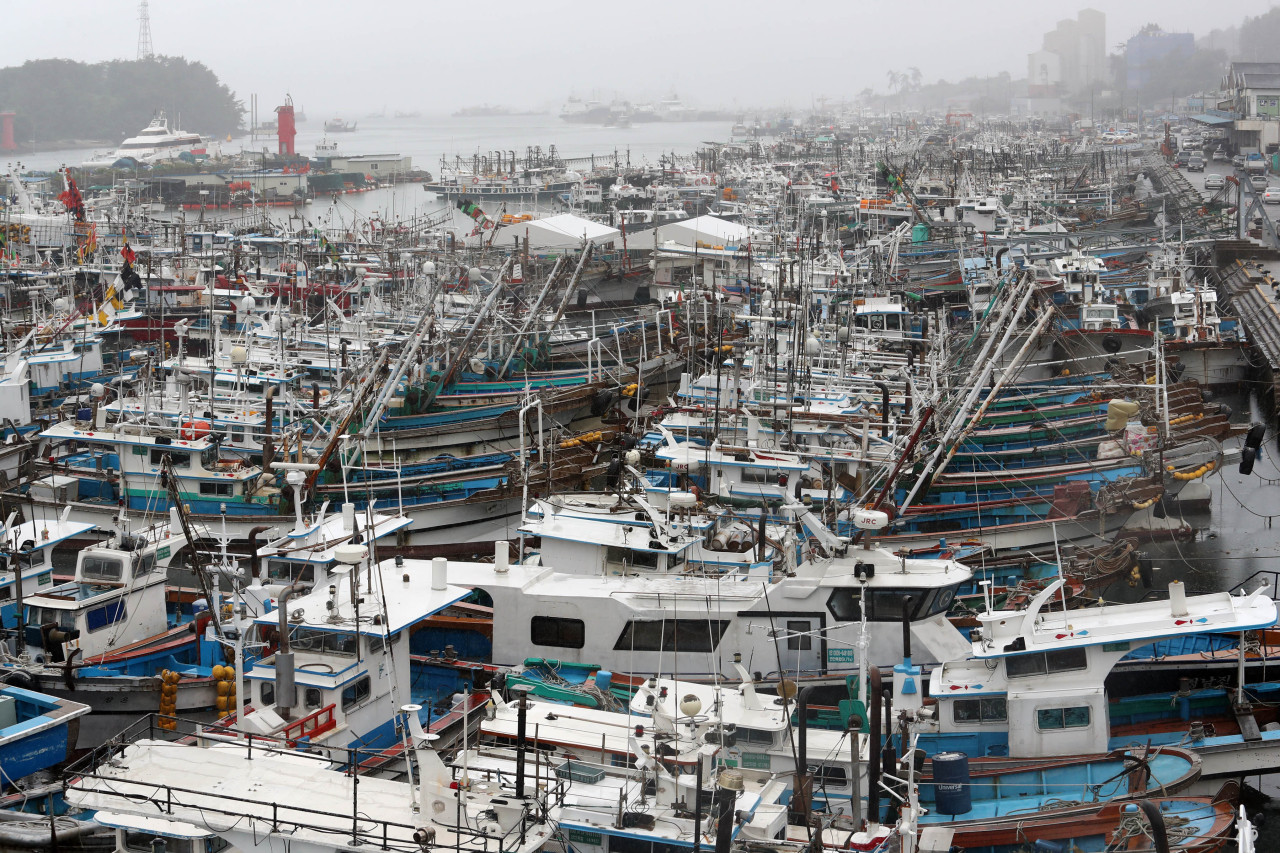 Ships are docked Monday at a shipyard in Yeosu, South Jeolla Province, as Typhoon Jangmi, the fifth typhoon of the year and the first typhoon to directly impact Korea, approaches the peninsula. (Yonhap)
South Korea breathed a sigh of relief Monday as Typhoon Jangmi was downgraded to a tropical depression soon after making landfall in the southeastern corner of the country, leaving behind little damage as the country was still reeling after days of torrential rains.

But Typhoon Jangmi affected many parts of the country, extending a monsoon season that was already one of the country’s longest and deadliest.

The death toll from the recent streak of heavy rainfall, which began Aug. 1, stood at 31 dead, 11 missing and eight injured. No new deaths or injuries had been reported as of press time Monday.

Since the monsoon season began in late June, 50 people have died or gone missing.

Jangmi, the fifth typhoon of this year and the first to have a direct impact on the Korean Peninsula, was downgraded at 5 p.m. near Ulsan after making landfall near Geoje Island, South Gyeongsang Province, at around 2:50 p.m. The country’s southern regions saw more than 40 millimeters per hour of rain and strong winds.

Up to 80 millimeters of rain was forecast for the capital, Seoul, and for Gyeonggi and Gangwon provinces.

As a precaution against the typhoon, 22 domestic flights to and from Jeju Island were canceled and 15 ships on nine routes connecting the island to the mainland were barred from operating. Officials restricted access to some tourist spots on Jeju Island, including hiking routes on Hallasan, while docking and evacuating thousands of ships for safety.

This year’s monsoon season, which started June 24, was on its 47th day Monday and is likely to last longer because of the typhoon. Korea’s longest monsoon season on record was 49 days in 2013.

The recent deluge has caused flash floods and landslides and destroyed roads, houses and farmland.

According to the Central Disaster and Safety Countermeasure Headquarters at 6 a.m. Monday, the death toll stood at 31, up one from Sunday after one of three people swept away by flash flooding in Danyang, North Chungcheong Province, was found dead.

The figure does not include the boat accident near Uiam Dam in Chuncheon, Gangwon Province, which was categorized as a marine accident. Three boats with eight people on board capsized near the dam Thursday after a police patrol boat got caught in a wire near the dam and two other boats worked to salvage it.

Of the eight people involved in the accident, two were rescued and four were found dead. One of the dead was a Chuncheon city official, whose body was found at around 9:30 a.m. Monday. Two others remain missing.

As of 6 a.m. Monday, 9,574 people from 4,555 households had to evacuate as a result of the torrential rain, and 969 people have yet to return to their homes, according to the central disaster response team.

Close to 7,000 people saw their homes damaged, and 3,425 are still staying in nearby gymnasiums and community centers.

A total of 14,091 cases of property damage have been reported, with 6,545 of them concerning private property. Around 25,113 hectares of farmland have been inundated, while 4,148 residential buildings were damaged or flooded. Repairs are around 65.3 percent complete, involving 9,208 of the reported cases.

To prevent further damage and injuries, the government has blocked access to 607 trails at 21 national parks and is limiting traffic on five highways across Korea.

The government is preparing to declare cities and counties in North Jeolla and South Jeolla provinces as disaster zones, adding to the seven designated last week in Gyeonggi, Gangwon, North Chungcheong and South Chungcheong provinces.

The costs of flood relief in designated special zones will be subsidized by state coffers at rates of 50 percent to 80 percent.

The leader of the ruling Democratic Party of Korea, Lee Hae-chan, said the party and the government would discuss relief measures, including the proposed special zone designations and another extra budget, if necessary.

“We need to act swiftly and execute disaster response costs from the reserve funds or draft a new supplementary budget,” Lee said, adding that officials from the party and related government bodies will hold a meeting, possibly Wednesday.

The discussion could continue at the provisional session of the National Assembly this month as opposition party lawmakers have also voiced similar opinions throughout the past week.