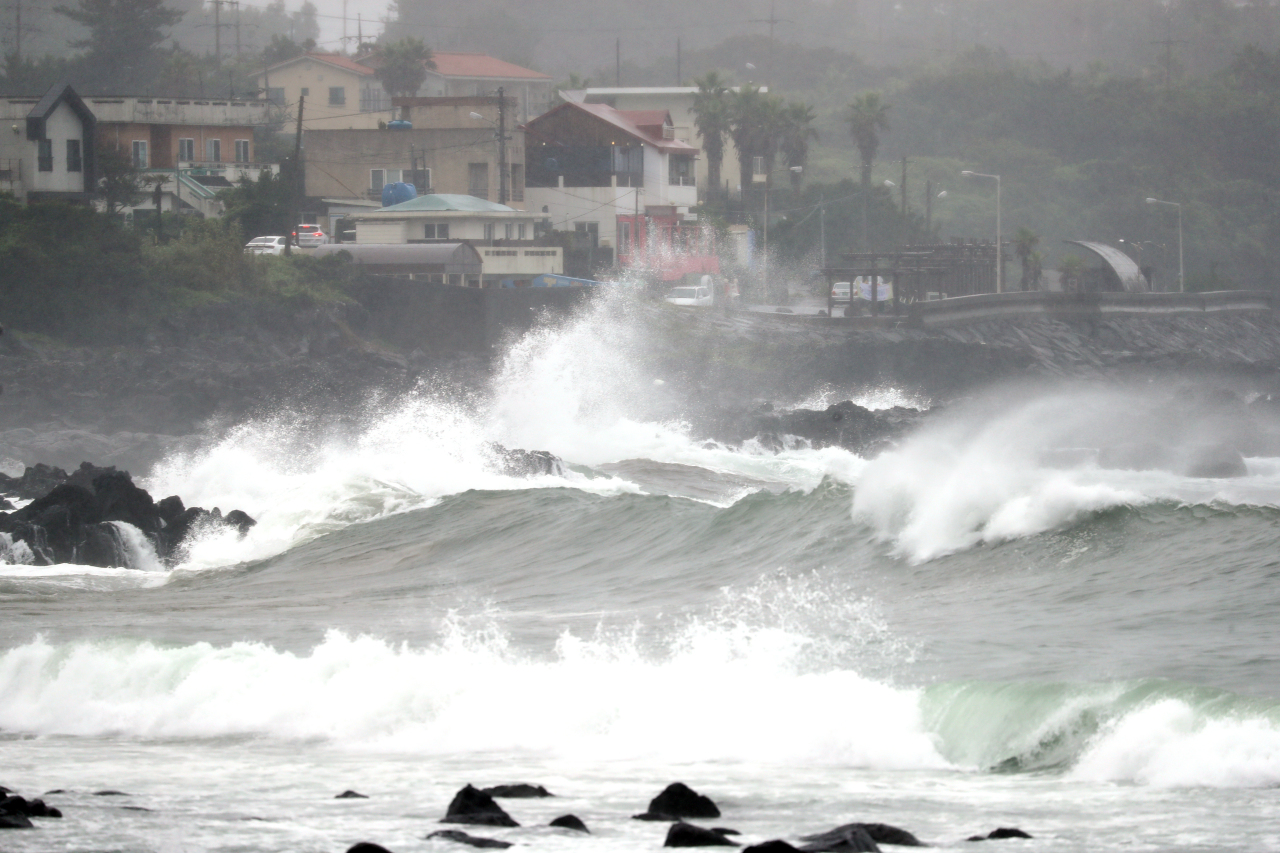 (Yonhap)
A typhoon is expected to bring more rain to the southeastern corner of South Korea already saturated from one of the longest and deadliest monsoon seasons on record, authorities said Monday.

According to the Korea Meteorological Administration, as of 10 a.m. Monday, typhoon Jangmi, the fifth this year and the first to make a direct impact on the Korean Peninsula, was skirting the eastern coast of Jeju Island and is due to make a landfall near Gyeongsang Province at around 3 p.m.

It is expected to bring more than 40 millimeters of rain per hour, accompanied by strong winds, to nearby regions before exiting through Pohang, North Gyeongsang Province, at around 6 p.m.

Prime Minister Chung Sye-kyun directed authorities to make the utmost effort to ensure the safety of people in vulnerable areas, during an emergency response meeting.

“This typhoon, although a relatively small one, worries many because it arrives on the heels of massive damage from days of heavy rainfall,” he said.

South Korea has seen casualties and property damage from a deluge of torrential rains that began on Aug. 1, as heavy downpours caused flash floods and landslides and destroyed roads, houses and farmland.

According to the Central Disaster and Safety Countermeasure Headquarters on Monday at 6 a.m., a total of 31 people have died, with 11 missing and 8 injured. The death count rose by one from Sunday after one of the three people swept under a stream in Danyang, North Chungcheong Province, was found dead.

The figure does not include casualties from the boat accident near Uiam Dam in Chuncheon, Gangwon Province, as the case has been categorized as a marine accident.

Three boats with a total of eight people on board capsized at around 11:30 a.m. near the dam Thursday after a police patrol boat got caught in a wire near the dam and the two other boats worked to salvage it.

Of the eight, two were rescued and four were found dead, including a Chuncheon city official whose body was found at around 9:30 a.m. Monday. Two others still remain missing.

The unusually long and intense downpour has also increased the amount of property damage in the affected regions. More than 8,800 people from 4,159 households had to evacuate due to the torrential rains, and 2,741 people have yet to return to their homes, according to the central disaster response team.

A total of 14,091 cases of property damage have been reported, with 6,545 of them concerning private property. Around 25,113 hectares of farmland have been inundated with water, while 4,148 residential buildings were damaged or flooded. The government said 65.3 percent, or 9,208 cases, have been recovered thus far.

To prevent further casualties and damages, the government has blocked access to 607 trails at 21 national parks and is partly limiting traffic at five highways across Korea. No air routes are suspended at this point, but trains have stopped running on five rail routes.