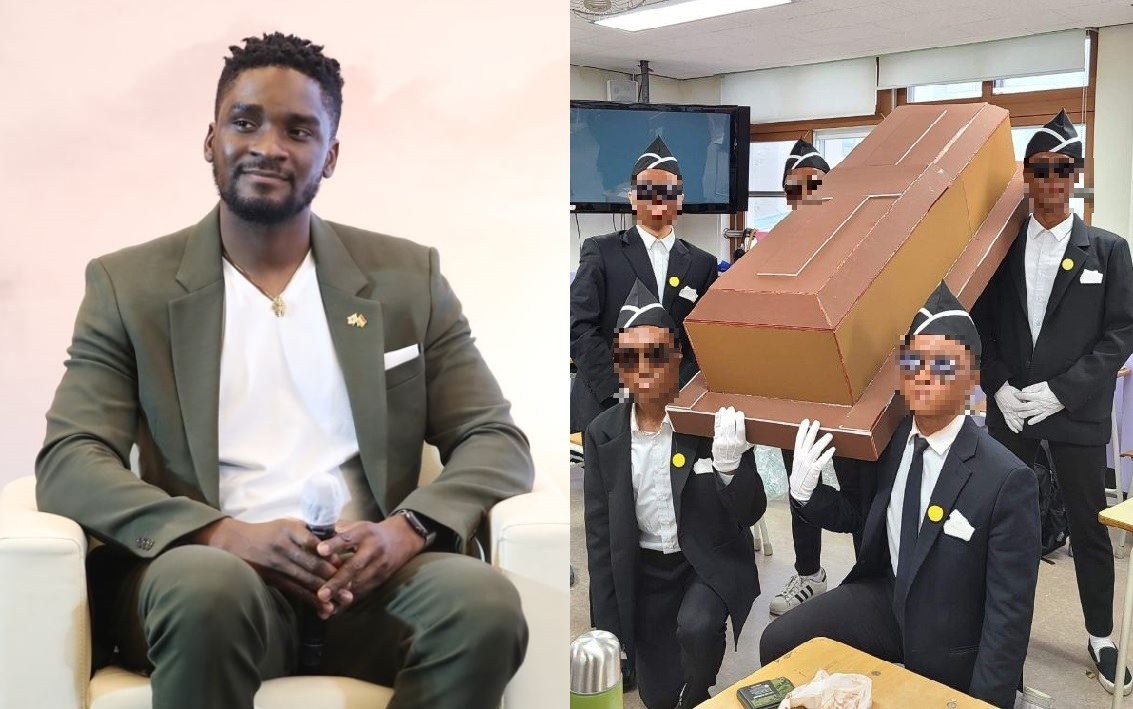 “Time and time again why won’t people get that blackface is very offensive and not funny at all,” Okyere had wrote in English. “There have been so many instances both on and off air where people pain their faces black here in Korean think it’s funny! It’s not and I am highly against it and highly disappointed.”

Pointing out at the Korean education about such mockery of a different culture, Okyere added, “This has to stop in Korea! This ignorance cannot continue!”

Contrary to his intentions, Okyere’s remarks immediately sparked controversy among some Korean internet users, who claimed it was insensible of him to openly criticize the high school students by reposting their picture without permission, and using the world “ignorance” in reference to the Korean education.

His use of the hashtag “#teakpop” -- a derogatory expression used on social media in discussing Korean pop culture -- also caused huge outrage among the Koreans, who slammed him as maliciously publicizing the issue by using an unrelated hashtag.

Some even called Okyere a “two-faced racist,” referring to his past behavior on air. During an episode of JTBC’s “Non Summit” in 2015, Okyere had pulled his eyes long with his fingers, in a common racist gesture made against Asians.

As criticisms mounted, Okyere on Friday removed the post and updated an apology in Korean.

“I had no intention to humiliate the students. I had gone too far in expressing my opinion, and I apologize for using their picture without their consent,” the new post read.

He went onto explain that he had not meant to discredit Korean education by criticizing it in English, and that he was not aware of the true meaning of “#teakpop” as he would never have used it if he had known.

“I had received a big love for a long time in South Korea, and I believe I was indiscreet this time,” Okyere said. “I apologize again. I will become a more educated person.”

Such controversy expanded after Benjamin Aidoo, a member of the original dancing pallbearers, shared the Uijeongbu High School students’ picture on his social media, with a comment celebrating their graduation.