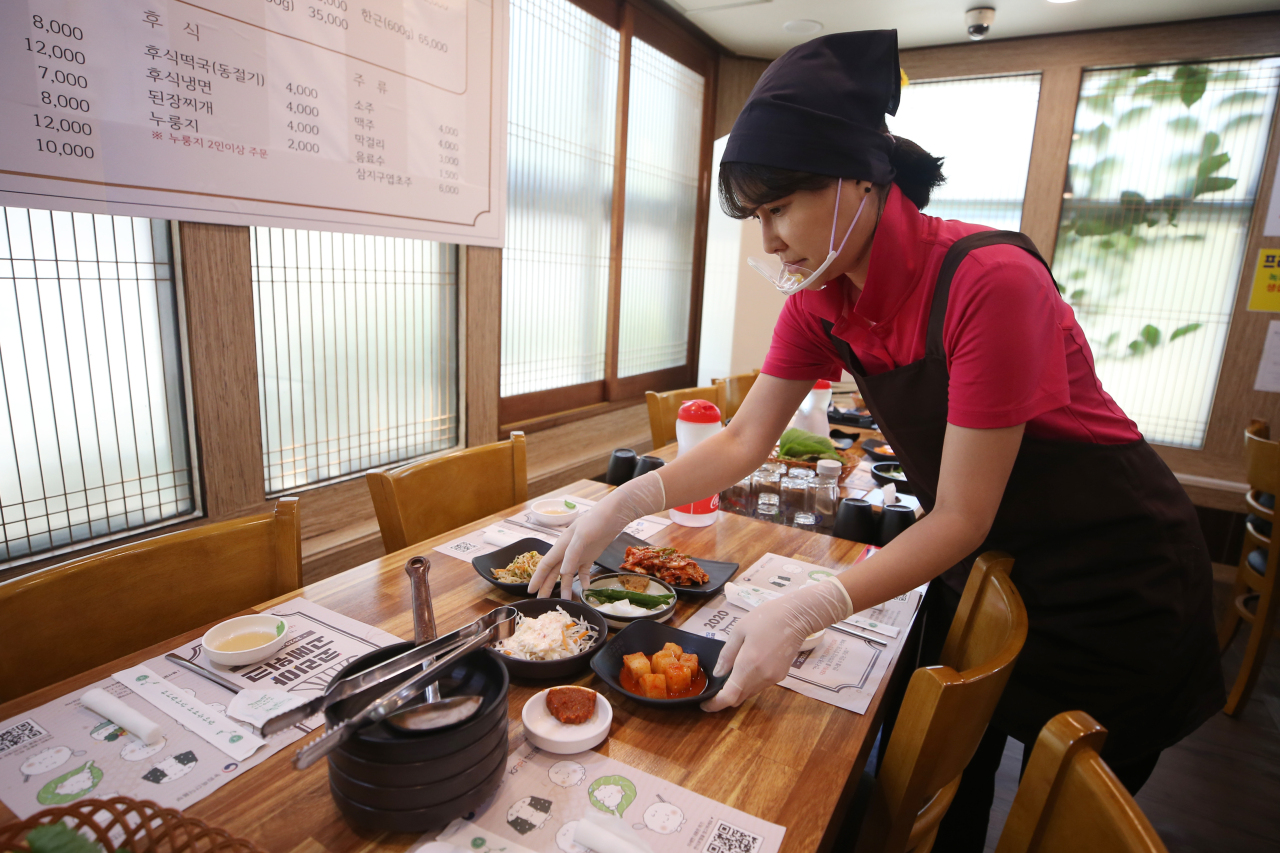 Photo shows a server at a restaurant in Gwangju wearing gloves and a plastic face shield as coronavirus countermeasures. (Yonhap)
Last Monday, a work meeting was held at a cafe in Gangnam, southern Seoul. It was not until days later that the people at that meeting learned one among them had coronavirus. The meeting left at least ten infected, including the servers and other visitors.

The cafe cluster rang alarm bells for many Koreans whose daily routines involve going out for coffee. The average Korean drinks 353 cups of coffee a year, according to KB Financial Group’s November 2019 report, which is 2.7 times the global coffee consumption per capita.

Life has returned to semi-normal in Korea after the epidemic’s first peak in March. The country is experiencing declines in local case counts, which dropped to a 3-month low of just three on Monday.

“I personally don’t feel comfortable dining out, but we still have after-work dinners almost weekly,” said a 28-year-old Seoulite who works in marketing at a travel agency. He said as far as his office is concerned, work life hasn’t changed much in terms of social distancing. Meetings are done over lunch and in cafes.

He said what happened in Gangnam sort of raised a red flag for him. “I’m not sure if it’s OK to eat out or drink the way we’re doing now.”

Another Seoulite, 32, who is an actuary at an insurance company in Gwanghwamun, said while gatherings were officially suspended where he works, people eat lunch in large groups anyway.

“We have a companywide policy that says person-to-person meetings are discouraged, but it can’t stop people from hanging out after work or making personal appointments,” he said.

But just how safe are cafes and restaurants? The answer is just as risky as any, according to experts.

“The recent case in Gangnam does not indicate cafes are more dangerous than other places, per se. Risks are present any time you interact closely with other people in a closed setting.” he said.

That being said, Choi said he didn’t believe cafes should be added to the government’s list of at-risk places and that directing focus on where the contagion took place and creating hype around it was “not healthy.”

“Nowhere is entirely safe. Wherever you go, remember to practice the basics: masks, hand hygiene and social distancing.”

Former head of the KCDC and pulmonologist Dr. Jung Ki-suck said from a public health perspective, he wouldn’t want “anyone to assume cafes and restaurants are any less hazardous than bars or pubs.”

He said the safety guidelines needed to be more detailed and specific.

“In addition to requiring the servers to wear masks, cafes and restaurants can screen guests based on present symptoms before they enter,” he said. “Tell the businesses how many guests they can host per square meter and how far apart the tables should be.”

In light of the spread at the Gangnam cafe, Yoon Tae-ho, who oversees public health policy at the Ministry of Health and Welfare, said during a closed-door briefing Tuesday that the existing guidance will be updated to incorporate the limitations of food outlets.

“At food and drink establishments, precautions such as wearing face masks cannot be observed due to the nature of their business, for instance. The new guidance will better reflect these challenges,” he said.

Infectious disease specialist Dr. Kim Tae Hyong of Soonchunhyang University Hospital in central Seoul said that in the end, slowing the virus will be achieved by “the sum of individual decisions.”

“There is no perfect system that will reduce the risks to zero. You can mitigate the risks by following the precautions, but that alone does not guarantee safety. You can do everything right and still catch the virus,” he said.

“It’s hard to measure and quantify the risks and come up with a one-size-fits-all standard that can be applied across the board,” he said, adding that he was wary of making “blanked statements about which type of venues were riskier than others.”

“While the threat of the virus is still around, we have to limit the boundaries of our social lives and base our decisions on calculated risks as we navigate the new situation.”