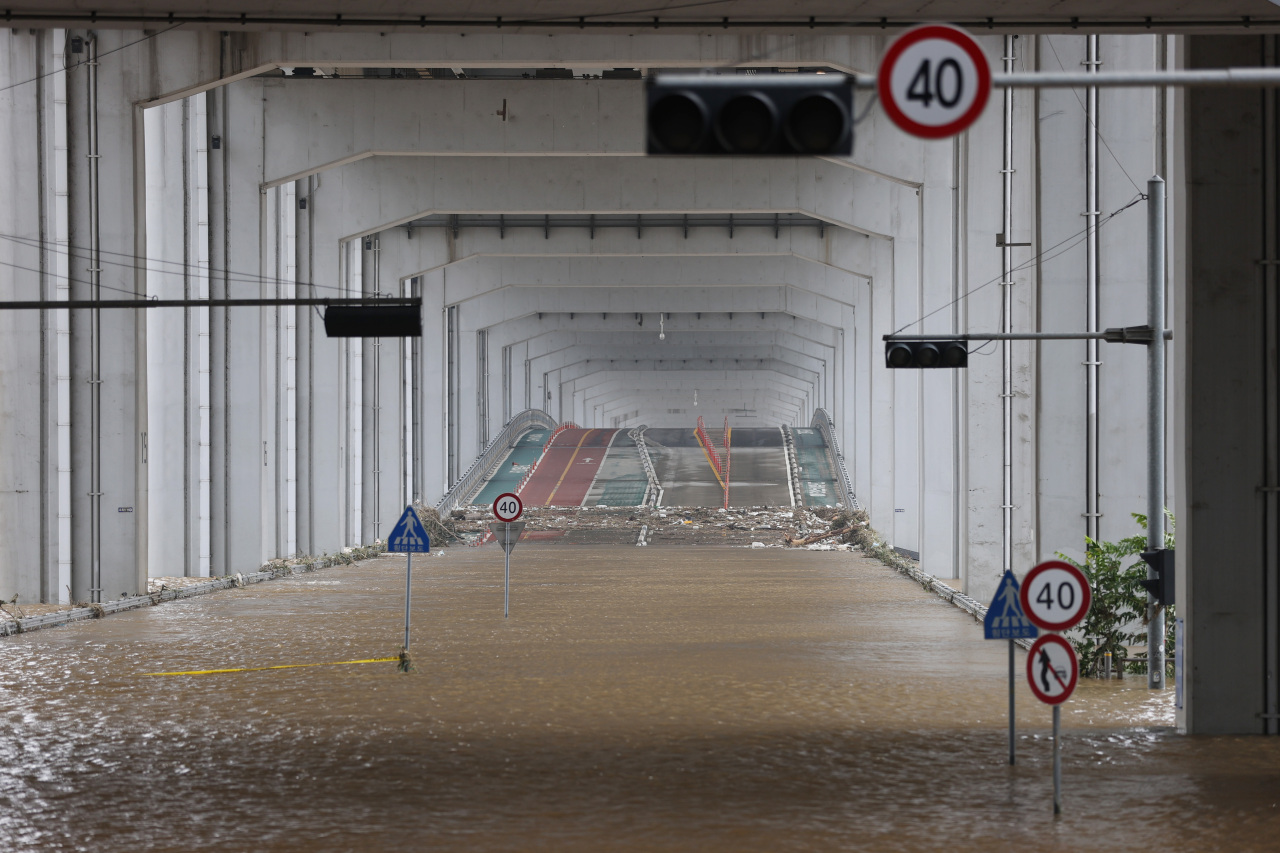 (Yonhap)
Damage from heavy rain that pounded the country's central region earlier this week continued to grow, leaving 13 dead and 13 missing as of Tuesday.

More than 1,000 were forced to leave their homes, while some

5,751 hectares of farm land were swamped or buried as of 6 a.m., according to the Central Disaster and Safety Countermeasure Headquarters.

Most recently, six deaths were reported in Pyeongtaek and Gapyeong, both in Gyeonggi Province, as landslides engulfed a makeshift workplace and a mountainside accommodation.

A man in his 50s, who went missing after falling into a manhole in Asan, South Chungcheong Province, was found dead.

Six people were reported missing, including a man in his 60s who got swept away by water while driving a truck in Jincheon, North Chungcheong Province.

A total of 1,025 people from 629 households fled their homes. More than half of them were in North Chungcheong Province, followed by 391 in Gyeonggi, 70 in Gangwon and nine in Seoul.

Property damage continued to snowball, with 1,483 private assets and 1,475 public facilities suffering damage from the downpour.

Around one-third of the damage was reported at houses, while damage was also reported at warehouses, agricultural plastic houses and cattle sheds, according to the government.

Public facilities, such as roads and bridges, railways and water reservoirs were also destroyed.

Authorities completed restoring more than half of the damaged properties, with more than 25,000 police and fire authorities as well as volunteers mobilized.

But some roads and railways -- 44 roads and six railway routes, including the Chungbuk, Taebaek and Yeongdong lines -- remained suspended.

In Seoul, most riverside roads that had entry restricted as water levels rose were back in operation, with the exception of Jamsu Bridge, which links the capitals' southern and northern parts over the Han River.

Trekking routes at 10 national parks, including Mount Bukhan, Taebaek and Songni, as well as 16 underpasses and 92 parking lots adjacent to streams and rivers, remained under restriction.

In an emergency meeting held at Cheong Wa Dae, President Moon Jae-in urged relevant ministries to take preventive measures to the "extent that could be seen as excessive."

Moon asked officials to put their best efforts toward prevention of additional casualties by restricting access to dangerous areas and evacuating areas preemptively. He also reminded officials to pay attention to possible landslides, while controlling dams and reservoirs to prevent floods.

Weather forecasts, meanwhile, showed that the downpour is likely to continue for the next few days.

Around 100-300 mm of rain was expected in parts of Seoul and Gyeonggi and North Chungcheong provinces, with precipitation hitting 500 mm in some areas.

"Due to a lot of rain, damage has been reported in the central region, prompting streams and reservoirs to overflow, toppling embankments and submerging underpasses. Outdoor activities should be refrained from as more damage is expected from rain," the weather agency said. (Yonhap)