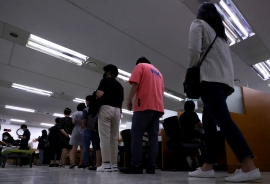 Visitors to a regional office of the Ministry of Employment and Labor in Seoul wait in line to apply for unemployment benefits earlier this year. (Yonhap)

SEJONG -- The gulf between the haves and have-nots is wider in South Korea than in almost any other member of the Organization for Economic Cooperation and Development, a recent analysis suggests, with only the US showing greater inequality.

The OECD measured income disparities by analyzing the poverty rates of 35 of its 37 members as of 2019. (Colombia and New Zealand were excluded.)

Korea posted a poverty rate of 17.4 percent -- the second-highest among the 35 economies analyzed. The US poverty rate stood at 17.8 percent. 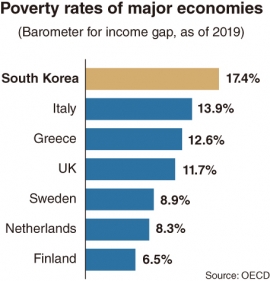 Among English-speaking countries, the UK, Canada and Australia were at similar levels with 11.7 percent, 12.1 percent and 12.4 percent, respectively.

Polarization between the haves and have-nots in Korea has continued to widen over the past few years.

Denmark and Iceland both recorded the lowest poverty rate for seniors, 3 percent. Next-lowest were the Netherlands at 3.1 percent, France at 3.6 percent, Norway at 4.3 percent and Slovakia at 4.8 percent.

While the Moon Jae-in administration recently created a huge number of public-sector jobs for seniors, the poverty rate among older people had climbed to 47.4 percent as of September 2019, according to Statistics Korea.

For young people up to the age of 17, Korea posted a poverty rate of 14.5 percent -- not far behind the corresponding figures for other developed countries.

But many of the 35 countries posted youth poverty rates of less than 10 percent. Among them were Sweden with 9 percent, the Czech Republic with 6.8 percent, Norway with 8.1 percent, Slovenia with 6.4 percent, Denmark with 3.7 percent and Finland with 3.5 percent.

According to an opposition party lawmaker citing data from Statistics Korea, households in the top 20 percent income bracket saw their monthly earnings increase by an average of 966,000 won in 2019 over 2017.