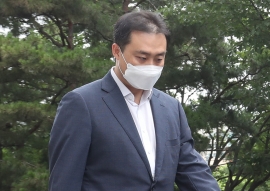 South Korea is looking to launch a bridge institution to take over all the assets, as well as the liabilities, of the scandal-ridden hedge fund Lime Asset Management and ensure that its end-investors can retrieve their investments as planned.

A bridge institution refers to a financial entity tasked with the acquisition of an insolvent financial institution’s assets to avoid systemic financial risks and ensure its commitment to consumers.

The bridge institution, tentatively named Rainbow Asset Management, is expected to go through the redemption process by 2025.

The group -- composed of Shinhan Investment, Daishin Securities, Woori Bank Hana Bank and 16 other institutions -- is also expected to submit documents to register the bridge institution to the financial authorities later this week.

The news comes after Lime announced that it had frozen a combined 1.67 trillion won worth of funds that were investing in privately placed bonds, mezzanine instruments and promissory notes associated with Lime’s botched investment in trade finance funds. Its fund backers were institutional investors, prime brokers and retail investors.

Lime, once considered the largest hedge fund manager in Korea, went astray with its bungled investments, triggering an unprecedented series of fund freezes last year. The Lime managers are facing fraud allegations that they had misrepresented its funds’ track record to brokerages, which led to a series of missselling. Both Lime’s CEO Won Jong-jun and ex-chief investment officer Lee Jong-pil are currently in detention.

The Financial Supervisory Service has formed a committee to decide on revoking Lime’s license by September.

In case Lime is bankrupt following the FSS decision, its entire assets will be transferred to the new entity at the discretion of financial authorities.