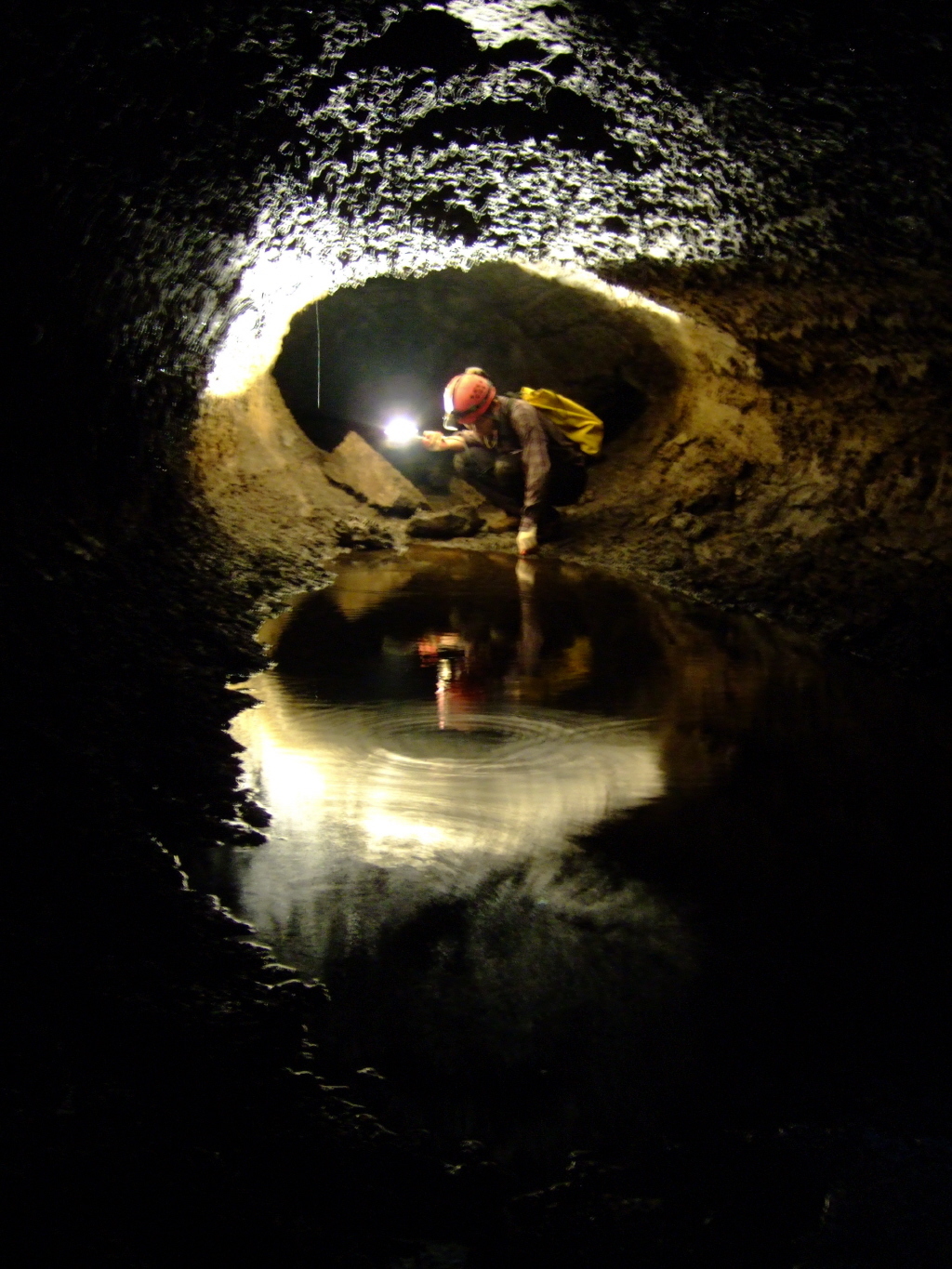 Bengduigul, one of the 10 caves found so far in the Geomunoreum Lava Tube System (Jeju World Natural Heritage Center)
JEJU CITY -- “Please turn off all the flashlights,” Ki Jin-seok, a curator of Jeju World Natural Heritage Center, said during a press tour of a restricted section of Manjanggul. Unlike the section of the cave that is open to the public, this area does not have a single light installed. The cave soon became pitch dark.

“Even after a while, your eyes will not get used to this darkness, because there is no light at all here,” Ki said. Manjanggul is a 7.4-kilometer-long cave created by basalt lava flows on Jeju Island.

The tour is one of 12 programs that the Cultural Heritage Administration and the Jeju Special Self-Governing Province have jointly created for the 2020 World Heritage Festival in Jeju, which will run from Sept. 4 to 20. 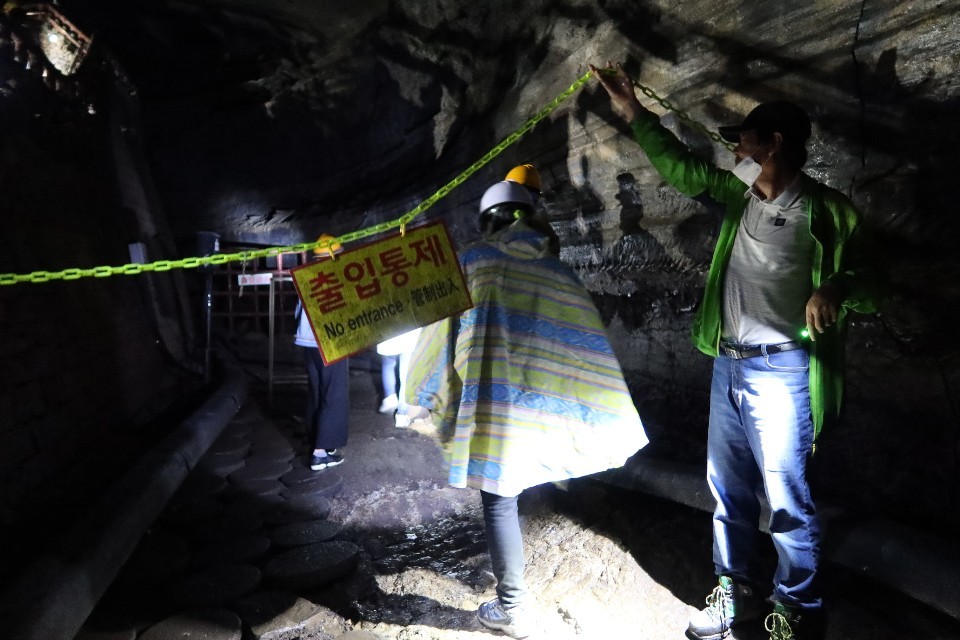 A participants of 2020 World Heritage Festival press tour enters one of the restricted sections of Manjanggul on July 24. (Song Seung-hyun/ The Korea Herald)
Kang Seung-bu, secretary-general of the festival in Jeju, said that creating balanced programs, which can satisfy those who argue that nature should be untouched for preservation as well as those who claim that it should be developed and promoted, was challenging.

“Natural heritage cannot be restored if it is damaged, but also it cannot be properly understood if we only preserve it,” Kang said.

“We are also aiming to create a festival that people can enjoy during the coronavirus era,” Kim, who directed the PyeongChang 2018 Cultural Olympiad, added.

During the press tour, the festival organizer highlighted the three special hiking trails which run through Geomunoreum Lava Tube System, which was created by a lava flow that originated at Geomunoreum, a 456-meter volcanic peak covered in lush forest, to Woljeongri Beach. 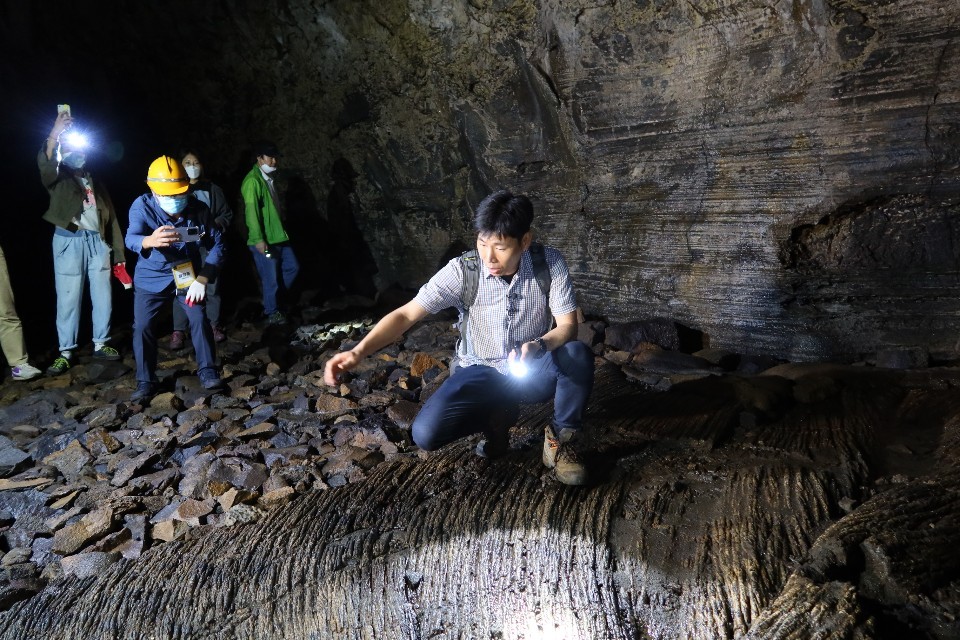 During the festival period, participants can take a close look at eight of these caves, except for Dangcheumul Cave and Yongcheon Cave, which are restricted for conservation reasons.

“Admission is free, but participants are recommended to make a reservation in advance, partially due to the coronavirus situation,” Kim said. Reservations will open Tuesday.

“We also will install some artwork in nature. We specifically asked artists to create works that go with the environment,” Kim said. 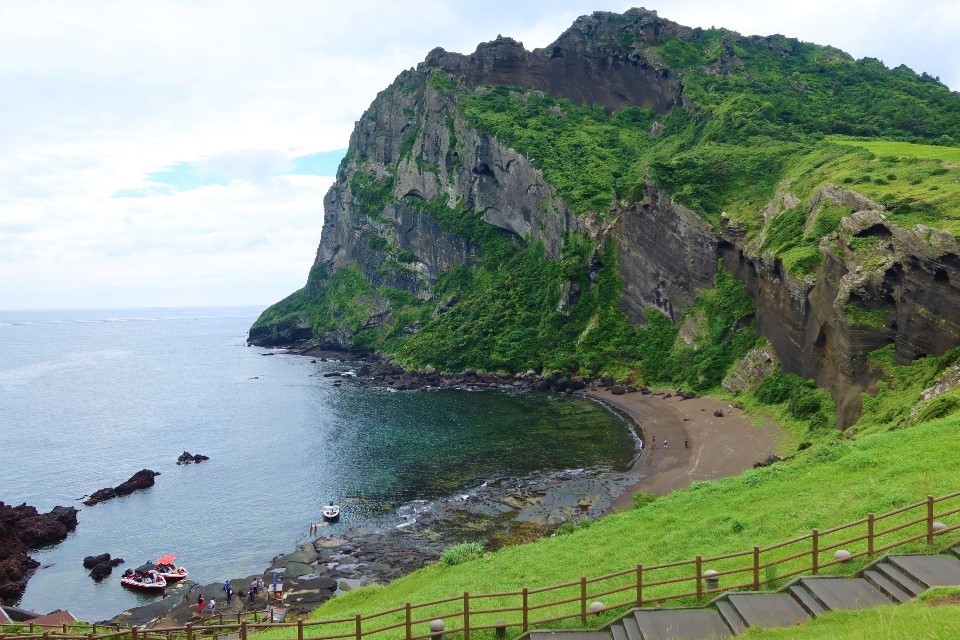 Seongsan Ilchulbong, which will be used as a screen for a video projection performance during the 2020 World Heritage Festival (Song Seung-hyun/ The Korea Herald)
Along with the trails, festival organizers have prepared a rare opportunity for participants to set up camp in front of Seongsan Ilchulbong.

“We were originally planning a program to go camping inside the crater of the Seongsan Ilchulbong Peak, but the CHA did not allow it for conservation reasons,” Kim said. “So, we asked for permission to conduct the program in front of the peak.”

Moreover, on Sept. 6 and 7, Kim will direct a special performance centered around the creation myth of Jeju Island, using projection mapping, which is a projection technology that turns objects into a display surface for video projection. Kim will use the peak’s side as the screen.

The festival in September is part of the three 2020 World Heritage Festivals that are being held in three different locations in Korea. The first festival celebrating the nine seowon, or Confucian academies of the Joseon era (1392-1910), that are inscribed on the UNESCO World Heritage list took place from July 3-31 and the second festival is currently being held in North Gyeongsang Province.

More details about the program can be found at the 2020 World Heritage Festival website worldheritage.kr.