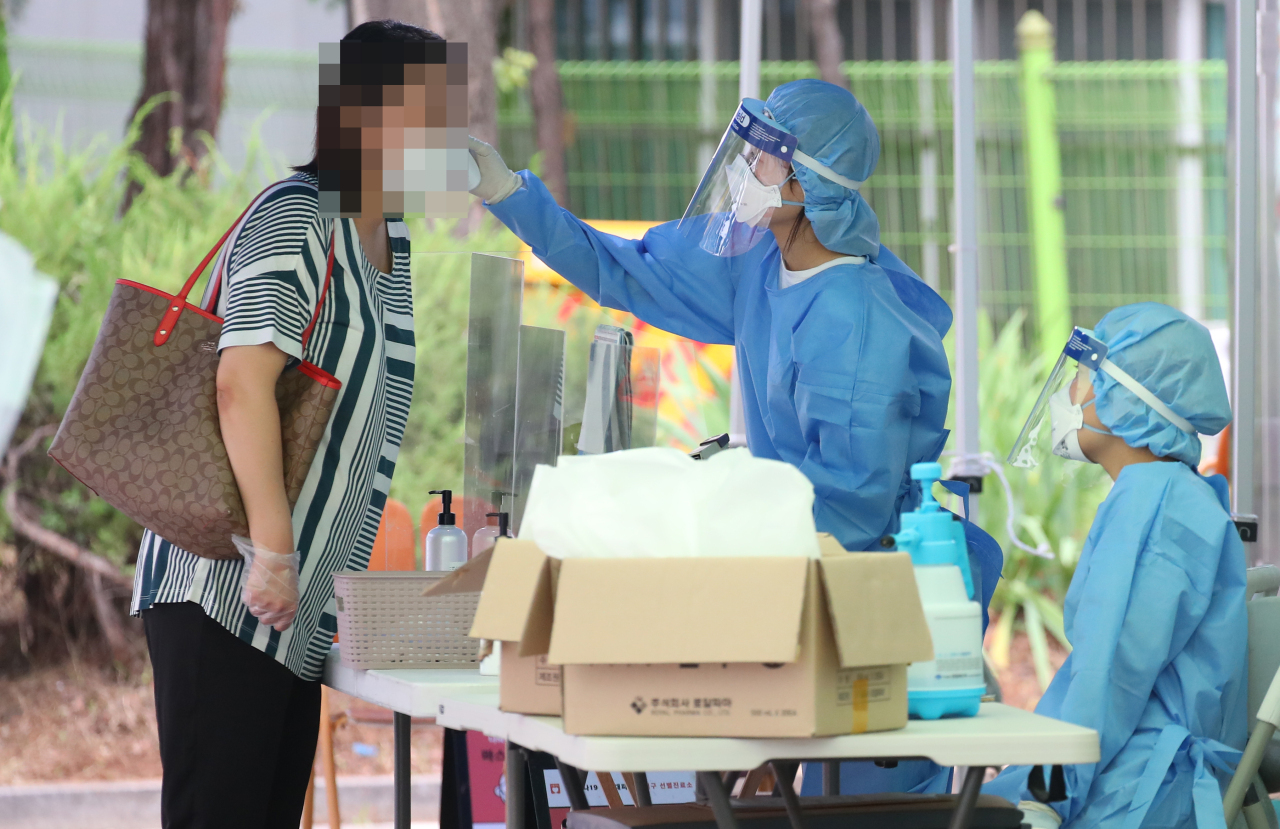 (Yonhap)
South Korea's new coronavirus cases dipped slightly to around 30 on Saturday, amid the country's stepped-up efforts to curb imported infections and local transmissions among vacationers at campsites.

The country reported 31 additional cases, including 23 imported ones, bringing the total caseload to 14,336, according to the Korea Centers for Disease Control and Prevention (KCDC). The number of new locally transmitted cases stood at eight.

The latest tally marked a slight decrease from 36 new cases reported Friday. But health authorities tightened vigilance amid concerns about continued inflows of the virus from abroad and local contagion during the summer vacation season.

The country's imported cases have recently risen due to infections among South Korean workers returning home from Iraq and Russian sailors. Imported cases, which hit a record high of 86 on July 25, have increased by double-digit numbers for more than a month.

Of the new imported cases, 14 were from Iraq, two from Uzbekistan, and one each from the Philippines, Russia, Pakistan, Vietnam, Poland, Brazil and Senegal.

The 14 cases from Iraq are those among the 72 South Korean workers who arrived back home from the Middle East country Friday.

They tested positive upon arrival, while four more of the workers got positive results Saturday.

Of the 293 workers who returned home from Iraq on July 24, a total of 77 were found to have contracted the virus.

Virus cases traced to Russian ships docked in Korean ports have also emerged as a new source of cluster infections. Starting Monday, sailors aboard ships from Russia will be required to submit a certificate showing they have tested negative for COVID-19.

In a comforting development for the quarantine authorities, the number of locally transmitted cases fell back below 10. Of the new eight cases, five were from Gyeonggi Province, two from Seoul and one from North Gyeongsang Province.

The health authorities have recently been reinforcing efforts to stop transmissions at campsites and other vacationing sites.

As of noon Saturday, the number of infections linked to a campsite in Hongcheon, 100 kilometers east of Seoul, remained at nine.

The authorities have conducted virus tests on 102 people who came in contact with the nine cases. Sixty-eight of them tested negative, while tests on the rest have yet to be completed.

The country reported no additional fatalities, leaving the death toll at 301, according to the KCDC.

The number of patients fully cured of the virus reached 13,233, up 50 from the previous day.

Meanwhile, the health authorities said they had provided remdesivir, an imported emergency treatment for COVID-19 patients, to 106 people who are in serious condition at 32 hospitals across the country.

The KCDC also announced that the production process of a locally developed COVID-19 plasma treatment for clinical trials is expected to be completed by Aug. 10. Researchers plan to conduct the clinical trial process to check its safety and efficacy.

Amid Korea's own push for the virus treatment, its quarantine authorities voiced concerns about an excessive global race to secure a vaccine and called for the World Health Organization's "active intervention and mediation."

"Amid the health care crisis of historic proportions that we are facing for the first time in 100 years, we need to respond in solidarity and share information to control the pandemic and minimize damage," Kwon Jun-wook, deputy director of the Central Disease Control Headquarters, told a press briefing.

"It is a time that calls for love for humankind, through which we use the vaccine and treatments as public goods," he added.  (Yonhap)