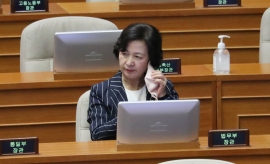 Minister of Justice Choo Mi-ae on Thursday said the religious sect Shincheonji Church of Jesus was attacking her over her prosecutorial reform drive.

“As the media and the United Future Party’s groundless attacks against me grow fiercer, it has come to Shincheonji attacking me,” Choo wrote on her social media account Thursday, saying conservative media and the main opposition were using family and personal issues to attack her.

As evidence that Shincheonji had joined the attack, Choo cited news reports that the church held a meeting and called on its congregation to sign a petition to have her removed from office. She also said the Ministry of Justice had received letters saying the government was oppressing the church.

Shincheonji was at the heart of the COVID-19 outbreak in Daegu, which crippled the city earlier this year. Its founder, Lee Man-hee, is currently under investigation over a number of allegations, including violating regulations on preventing the spread of infectious diseases.