Mark Raine, vice president of product & marketing at Mercedes-Benz Korea, proudly presented a face-lifted model of the AMG GT 2-Door Coupe to press at the AMG Speedway, its racetrack located in Yongin, Gyeonggi Province, on a sunny Friday in July. 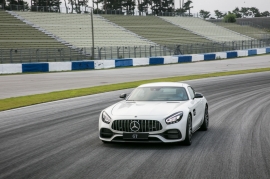 The upgraded GT has a new look. Its exterior features include newly designed head and rear lamps, rear apron diffusers and wheels. Its driving performance is improved. It now boasts 476 horsepower and a maximum torque of 64.2 kilogram-meters, taking four seconds to sprint from a standstill to 100 kilometers per hour.

The Korea Herald had an opportunity to test drive the AMG GT 2-Door Coupe at AMG Speedway, the perfect place for a driver to experience the car’s full capacity.

Running at speeds of 180 kilometers per hour, it still offered serene ride quality without noise or vibration. Even when driving through the deeply curved section quickly, the car body remained stable without tilting.

The brakes were suddenly applied while driving at 150 kilometers per hour, and the vehicle smoothly slowed with no discomfort. 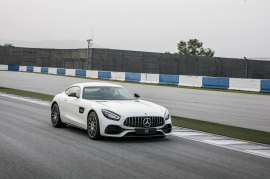 The automaker said the serenity comes from the location of the GT’s engine. The front-mid engine is positioned far back in the engine compartment to give a sense of security, and is located about 55 millimeters lower than typical to lower the center of gravity.

As the hardcore performance of the car offers both dynamics and comfort, it can be driven every day to work as well as on the racetrack, said the vice president. He himself owns the GT 4-door Coupe launched last year and uses the car for his commute.

GT distinguishes model names with letters and not numbers like other Mercedes-AMG models. It has four main models: GT, GT S, GT C and GT R. Later letters have greater designs with a more aggressive performance. In Korea, only two, GT and GT S, have been launched so far, and two others will be rolled out at an unspecified time in the future, Mercedes-Benz Korea said.

As demand for high-performance cars rises in Korea, sales of Mercedes AMG models have also risen. Domestic sales of the AMG last year marked 2,740 vehicles, or 3.5 percent of the total 78,133 models sold, Mercedes-Benz Korea said. In the January-June period this year, sales reached 2,129 units, or 5.9 percent of the total 36,368 units. As for AMG GT, which was launched in 2015, it has sold 277 so far.

The price and details of the four new cars unveiled will be released in time for the official launch in Korea in the third quarter.