[Feature] Do you trust your surgeon? 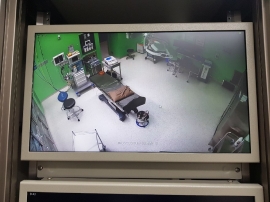 Debate has resurfaced over the need for surveillance cameras in hospital operating rooms, with strong support from the ruling party for the mandatory use of cameras to protect the rights of patients.

Rep. Kim Nam-kuk of the ruling Democratic Party of Korea and 12 other lawmakers submitted a bill on July 9 that would obligate hospitals to deploy security camera systems inside operating theaters in a bid to prevent medical mistakes, ghost surgeries by underqualified or untrained hospital staff, and sexual assaults on patients under anesthetic.

The current operating room rules and system create an imbalance in information between surgeons and patients, Rep. Kim argues. Patients are unconscious while under anesthesia, and no one else is allowed to enter the operating room to support or advocate for them, making it difficult to prove medical error or malpractice.

“It is hard to fundamentally prevent the occurrence of medical malpractice and sex crime under the circumstances,” Kim said.

Under the bill, medical institutions and health care providers would have to record medical procedures upon the request of a patient or a patient’s guardian. The request could not be refused without reasonable cause.

Debate over the issue is not new. It is the third time that the Democratic Party has pushed for a similar bill to become law. Two previous bills were discarded during the 19th and 20th National Assemblies.

In South Korea, interrogation rooms at police stations and prosecutors’ offices, as well as child care centers, must be equipped with security cameras by law.

The new bill appears to have many legislative hurdles to clear, but a recent survey shows it has the general public on its side.

The poll, conducted by Realmeter on 500 people aged 18 years or over nationwide, found that 73.8 percent of respondents favor security cameras in operating rooms. The survey results, released July 23, showed that 10.9 percent opposed it because of possible infringements of privacy and interruption of medical activities.

Gyeonggi Province Gov. Lee Jae-myung is giving the bill further impetus. He advocated for the legislation to give fresh momentum to his project to get private hospitals to deploy cameras. Six province-run hospitals in Suwon, Uijeongbu, Paju, Icheon and Pocheon have installed cameras and allow patients to insist on recording.

He called the proposal “a minimum measure that will help create an environment for patients to undergo operations without anxiety,” in a letter he sent to all 300 members of the National Assembly, calling for bipartisan cooperation.

“There is a great wall of distrust between patients and hospitals due to shameful incidents, including ghost surgery cases,” Lee said. He said the policy would benefit hospitals and medical professionals as they could build trust with patients.

On July 15, Health Minister Park Neung-hoo said during an interpellation session that the ministry would carry out inspections and surveys to grasp the exact state of affairs regarding the issue.


‘It will make a lot of difference’

The Realmeter survey was conducted after the mother of a 5-year-old son lodged an online petition on the Cheong Wa Dae website, calling for cameras to be mandatory in surgery rooms.

Her son, Kim Dong-hee, died five months after undergoing a tonsillectomy at a hospital in Yangsan, South Gyeongsang Province, in October last year.
The doctors who participated in the surgery stated in a report that no surgical errors had occurred. But when asked by the boy’s parents later, they confessed that they had anesthetized him again during the surgery due to unexpected bleeding. Police launched an investigation into the case, while three doctors who took part in the operation either quit or were relocated to other branches of the hospital in Busan.

The mother said surveillance footage would have made it much easier to prove what caused her son’s death.

Another mother of a medical malpractice victim -- Kwon Dae-hee, who died from excessive bleeding during a surgical procedure at a plastic surgery clinic in Seoul in 2016 -- sent letters to lawmakers on Monday to support the bill.

A review of footage revealed that the surgeon carried out operations on multiple patients simultaneously and left the operating room mid-procedure, leaving a nursing auxiliary in charge. In May last year, the Seoul Central District Court ordered the clinic to pay 430 million won ($360,000) in compensation to the victim’s family.

“Fortunately, we had CCTV footage that enabled us to take legal action. Without the evidence, the case could have been acquitted. I think many youngsters are still victimized by ghost surgeries at factory-like plastic surgery hospitals which entice customers with deceptive advertising,” the mother said in a letter to lawmakers.

According to the National Police Agency, some 611 doctors have been arrested for sex crimes between 2014 and 2019. Of them, four committed sex crimes while treating patients -- including a plastic surgeon who raped three patients during general anesthesia. They were suspended for a month, but they kept their medical licenses.

Critics said doctors often are expected to uphold high ethical standards in their professional and personal lives, but that regarding them as potential offenders is excessive as the number of doctors with criminal arrests or convictions is low compared with members of other professions.

Not surprisingly, the Korean Medical Association, the country’s largest doctors’ group, with over 100,000 members, opposes the bill. The association argues that it could lead physicians to adopt more defensive medical behavior during operations so as to avoid being named in potential malpractice lawsuits.

Song Myoung-je, a board member of the group and emergency medicine physician at Catholic Kwandong University International Saint Mary’s Hospital, said the association stands against applying a uniform rule for all doctors and operating rooms. But it won’t stop members who are willing to install surveillance cameras voluntarily.

“It won’t be a problem for simple operations. But when I asked cancer surgeons and cerebrovascular surgeons, they said their hands would tremble when being watched by surveillance cameras,” he told The Korea Herald, adding that their nervousness could have adverse effects on patients.

There is also the issue of privacy for both physicians and patients.

“I think ways to keep the recording confidential from others should be taken into careful consideration as very sensitive and private parts of you will be filmed,” said Kim Sun-mi, 38, who has undergone major heart surgery four times.

The bill, submitted by Rep. Kim, stipulates that the recorded material be used only for the settlement of medical disputes. Hospitals would have to follow the Personal Information Protection Act in the storage, collection and disclosure of footage.

Doctors’ groups argue that surveillance cameras would infringe on their freedom.

In February, Korea’s central administrative agency the Anti-Corruption and Civil Rights Commission ruled that legislation making the installation of cameras compulsory would not violate the fundamental rights of medical professionals, including the right to make decisions about their personal information or the freedom to choose an occupation.

“I wonder why it has to be limited to hospitals. Why not restaurants across the country? Don’t people worry about hygiene management of the food that restaurants serve too?” said a physician in Busan, who declined to be named.