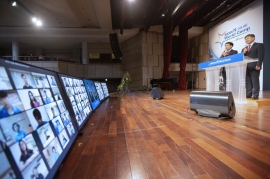 The International Youth Foundation announced the start of the 2020 IYF Online World Camp on Sunday, bringing together over 170,000 people from some 90 countries around the world.

The four-day online camp aims to bring joy to young people around the world who have been suffering from long-term social distancing.

The annual festival, held online for the first time this year, allows college students around the globe to watch lectures delivered by global leaders, art performances from different countries and a K-pop contest, among others attractions, through YouTube and Zoom.

The opening ceremony Sunday started with dance performances by IYF and American dance teams, followed by words from global leaders such as IYF President Park Moon-taek, former Prime Minister Lee Soo-sung, President Yoweri Museveni of Uganda and Paraguay’s former President Fernando Lugo, as well as other figures, wishing the success of the camp.

The Rev. Park Ock-soo, founder of IYF, also gave a speech asking young people around the world to acquire wisdom in overcoming challenges in life.

“I hope the youths around the world joining this camp will become a light shining on the world like stars in the dark,” said Park.

The camp concludes Wednesday with a K-pop contest showcasing K-pop performances by youth around the world.