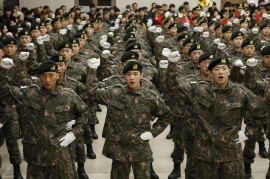 Army conscripts sing a marching song at a basic training graduation in the southwestern city of Gwangju on Jan. 8 2020. (Yonhap)

Starting next Wednesday, soldiers who break rules while on active duty will not face detention at a guardhouse. The military is putting an end to the 124-year-old practice, which critics say constitutes unlawful confinement.

Currently, rule-breaking soldiers can be detained in military lockup facilities for up to 15 days, and time in detention does not count toward their compulsory terms of about two years in the military.

The detention system, in place since 1896, has been called unconstitutional as no warrants are sought. The Constitution says a warrant is needed before an individual can be detained.

The military plans to replace detention with a mandatory education program for rule-breakers. To deter infractions, soldiers in the program will see their terms of service extended for as long as the duration of the course, up to 15 days.

“The military is still fine-tuning the program at the moment,” a Defense Ministry official said.

Other punitive measures may include letters of reprimand and reduced wages.

The abolition of guardhouses and new punitive measures rolled out Tuesday are in line with a revision to the Military Personnel Management Act that takes effect Aug. 5.

“We will carry on with a strong defense readiness, all the while safeguarding the rights of our soldiers,” a Defense Ministry official said.