[Herald Interview] ‘I am the luckiest conductor’ 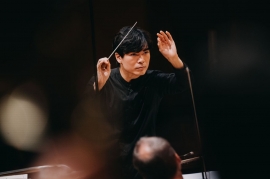 For Wilson Ng, the associate conductor of the Seoul Philharmonic Orchestra, getting to the venue of the 2020 Mahler Competition was like “riding a roller coaster.”

The competition was held from June 29 to July 5 in Bamberg, Germany, defying many people’s expectation that the prestigious competition for conductors under 35 may not take place as scheduled.

Travel restrictions, however, presented challenges to some of the16 contestants invited to perform in Bamberg, including Ng. In the end, 12 contestants showed up.

On June 29, Ng, the Hong Kong-born conductor who joined the SPO in 2019, boarded a Frankfurt-bound flight at Incheon Airport with a visa waiver provided by the organizers. However, the border controls held him at the Frankfurt Airport, on grounds that Germany had not lifted its entry ban on Korea.

After two days of back and forth, Ng was allowed to leave the airport. He arrived in Bamberg one hour before his first round, which organizers had postponed for him.

“The moment I was out of the airport, I could not stop my tears, it was as if I had already won,” he told The Korea Herald during an interview held in Gwanghwamun, central Seoul, Tuesday, the day after his two-week self-quarantine in Korea ended.

“I have never had this ‘inferior’ feeling when I traveled. It felt like I was doing something wrong or I was begging for something. As a conductor, when you stand at a podium, what you really need is confidence and authority. The two things were totally destroyed and diminished,” Ng said.

At the competition, Ng conducted Mahler’s Symphony No. 4 in G major, Mozart’s Symphony No. 26 in E flat major, K. 184, Webern’s Variations for Orchestra, Op. 30, Lachenmann’s Tableau for Orchestra and a commissioned composition written by Miroslav Srnka for the Bamberg Symphony.

“I am proud of myself. Not because of winning a prize, but overcoming the situation and being able to deliver (music) as a professional conductor,” Ng said.

“Ultimately, being a conductor is to be able to not only make music with an orchestra but also to organize yourself to make things happen, to make concerts happen. I think this is part of our abilities to do with things beyond music.”

Cramming for the competition, Ng has developed a new way of studying music.

Though the global orchestra scene is yet to fully open up, Ng already has a lot on his plate. Ng is to open the 2020 SAC Classic Festival on Tuesday with the SPO, presenting Schumann’s Symphony No. 2 in C major Op. 61 and Brahms’ Piano Concerto No. 1 in D minor, Op. 15 with pianist Kim Jeong-won at the Seoul Arts Center.

On Aug. 25, Ng will take the baton for the Bucheon Philharmonic Orchestra as part of the Classic Revolution 2020 Seoul, a music festival held at the Lotte Concert Hall, presenting an all-Beethoven program of Fidelio Overture, Op. 72b, Piano Concerto No. 4 in G major, Op. 58, and Symphony No. 5 in C minor, Op. 67.

“I am the luckiest conductor. Who else is conducting?” Ng said.