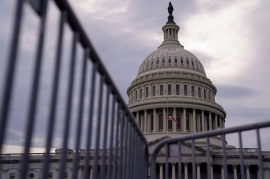 WASHINGTON -- The US Senate has passed its version of a defense policy bill that contains restrictions against the drawdown of troops in South Korea.

The Senate voted 86-14 in favor of the National Defense Authorization Act (NDAA) for fiscal year 2021 on Thursday, days after the House of Representatives passed its version.

In the Senate version, the bill prohibits the use of the authorized funds to reduce the total number of American troops stationed in South Korea from their current level of 28,500 until 90 days after the secretary of defense certifies that the move meets two conditions.

Those conditions are that a reduction is in the national security interest of the United States and will not significantly undermine the security of US allies in the region, and that the secretary has appropriately consulted with US allies, including South Korea and Japan, regarding the move.

The House version additionally requires that a reduction is commensurate with a reduction in the threat posed by North Korea.

This year's NDAA contains the same provision restricting a drawdown of troops below 28,500. Last year's version set the bar at 22,000.

The Senate and House versions must be reconciled before the bill can be passed again by both chambers and sent to US President Donald Trump to sign or veto.

If kept, the restriction is expected to limit the Trump administration's ability to withdraw troops from South Korea.

Last week, The Wall Street Journal reported that the Pentagon presented the White House with options to reduce troops in South Korea in March. (Yonhap)