[Eye Interview] With court battle over, singer-artist ready for limelight 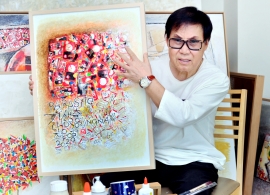 Singer-artist Cho Young-nam holds up a painting in his hwatu series during an interview with The Korea Herald on July 13. (Park Hyun-ku/The Korea Herald)

“I am 75. I am past the age for singing. The state has now said that I should make a living painting,” says Cho Young-nam during an interview with The Korea Herald on July 13 at his apartment in Cheongdam-dong, Seoul, overlooking the Han River and Yeongdong Bridge. He is speaking about the recent Supreme Court decision that found the singer and painter not guilty of fraud.

In 2016, Cho was sued by a buyer who accused him of fraud. He was alleged to have hired another artist to paint his hwatu paintings -- a series of paintings using images of hwatu, or Korean playing cards -- and selling the paintings without providing information about the extensive involvement of the “ghost” artist. According to prosecutors, Cho sold 20 of these paintings between 2011 and 2015 for some 150 million won ($125,000) total. In 2017, a Seoul district court found Cho guilty and sentenced him to 10 months in prison, suspended for two years.

At the heart of the five-year legal battle was whether Cho intended to commit fraud in not informing potential buyers of the involvement of an assistant. When Cho sought to defend himself by arguing that the use of assistants is customary in the practice of modern art, it raised quite a stir in the local art scene.

Artists’ groups, gallery owners and art critics all weighed in on the matter. While many of Cho’s friends and supporters rallied to his defense -- outspoken liberal commentator Chin Jung-kwon appeared in court as a witness for the artist -- Cho, at one point, was also sued by different artists’ groups over his claim that the use of a hired hand was the norm in modern art. The public expressed outrage that an already wealthy celebrity could make money by merely signing his name on a piece of art. Even those who acknowledge the practice of using assistants in conceptual art applied a different standard to Cho, who was primarily a singer. It is not as if he were Damien Hirst, they said.

“Well, I don’t really know if it caused me any pain or not,” Cho says, bent over a painting on the coffee table, applying acrylic paint with quick, short strokes of the brush. “In fact, it has brought me great comfort in my late years,” he says.

“There were moments when I was shocked, but that was not unbearable. I think all that happened because there are many people who do not know about art,” Cho says.

Cho sounds almost cheerful that, in his words, the state has now officially sanctioned him as a painter. If that is how he has chosen to interpret the Supreme Court decision, Cho is justified in his cheeriness. To be recognized as an artist, after all, is what Cho appears to have been craving ever since he picked up the brush in the 1960s, only a few years after his debut as a singer.

Most people know Cho as a singer, albeit with only a few hit songs. While he did have some original Korean hits, most of his songs were American pop songs rendered in Korean. He sang with great gusto and drama -- perhaps more of an entertainer than a singer, if such a distinction could be made.

If the public associates Cho with paintings at all, it is likely as a celebrity who dabbles in painting as a hobby. Hence the resentment expressed by many that Cho made money by selling paintings, exploiting his fame, while a poorly paid ghost painter did the actual work.

But Cho is no dilettante. Following his first exhibition in Seoul in 1973, Cho has had some 40 exhibitions in major cities, including Beijing, New York and Los Angeles, according to the flap of Cho’s latest book “Goddamn Modern Art.”

The book came out on July 5, only 10 days after the Supreme Court ruling. Apparently, Cho, who had published a book on modern art in 2007, had been working on yet another book on modern art for quite some time when he approached a publisher with the first set of manuscripts in 2017. “I realized during the court proceedings that people seriously did not know about art,” he says on his reason for writing “Goddamn Modern Art,” a book of 100 questions and answers on modern art. When the Supreme Court decision came, all there was left to do was to send it to press. 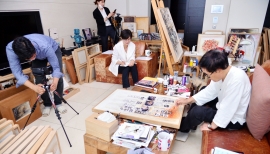 Cho Young-nam works on an illustration for his upcoming book while being interviewed. (Park Hyun-ku/The Korea Herald)

Applying acrylic paint to what appears to be a finished piece of work on the coffee table, Cho looks like a little boy all but begging to be asked what he is doing.

“Poet Yi Sang and Five Children” reads the cover illustration with Cho’s portraits of Yi Sang, Picasso, Nietzsche, Einstein and Mahler. Cho says he has finished writing the 10-chapter book. As if to prove his point, he fetches a print out of the manuscript with handwritten notes scribbled on the pages. Cho is notoriously computer illiterate and writes in longhand, which his publisher types into a computer for him, surely a laborious process.

For Cho, who has written a book analyzing Yi’s works, the poet will always occupy a central place in his heart. He is amazed by how Yi depicts Cubism with his words nearly as well as Picasso. Yi Sang’s writings on the absurdity of a god are comparable to those of Nietzsche’s existentialism, Cho claims with great animation. In his book, the eminent figures will form a band, Cho explains.

Going back to the court ruling, Cho admits to having been scared before the ruling.

Really? A man who performs in front of thousands actually nervous?

“You try standing before four Supreme Court judges sitting high above you,” Cho says. At the final hearing on May 28, streamed live from the court, Cho was given an opportunity to make a final statement.

“That was the biggest performance art of my life,” Cho says.

Toward the end of his final statement, Cho said, “Our elders have said that playing hwatu will bring disgrace and destruction upon your family. I think I have played too long with hwatu.” Did he mean that he will stop painting hwatu?

Cho breaks out into a big laugh. He regrets having sounded too solemn and grave that day. That line was meant to be funny, a joke, he says. “Of course I will continue painting hwatu as long as they sell!”

Since being legally cleared of fraud charges, Cho has been going to the movies, playing golf, going out to eat and chatting with friends. “‘The Idiots’ by that genius Danish director (Lars von Trier) was tremendous!” Cho exclaims.

Of course, he had a party after the court decision, he says. “There were about 30 people. This party had the best feel of them all,” he says with great relish. “I guess it had something to do with being declared not guilty after five years (in the courts).”

“It was like the parting of the Red Sea. The court trials clearly showed who my allies are and who my foes are,” he says. “People around me have been cleared. Hence, my late years have become easier,” he says, ever the optimist, finding a silver lining in almost anything.

“Free spirit” is a phrase that comes to mind when looking back on what is known of Cho’s life and his many antics. It is not surprising, then, that Cho prefers painting over singing. “Painting and songs appear similar, yet they are different,” Cho begins. “Music is a game with rules. Art is 100 percent freedom,” he says.

“If someone held a gun to my head and asked me to choose between art and music, I will choose what makes more money,” he says, quickly adding, “Art, if they make equal amounts of money.”

What others think be damned; Cho is bent on doing what he likes doing. And that includes writing, as well as painting.

“I have been writing for nearly 20 years,” he says. “People tell me I have a fun way of writing, that makes me somewhat proud, so I continue to write.”

He is well aware that his upcoming book may be not well received. People might consider it a fraud, exploiting Yi Sang, he says. “‘A band (of the geniuses)? The idea is lowly, it is a fraud’ they might say,” Cho says.

Now that his name has been cleared, Cho is ready to resume his other work -- entertainment. The court case effectively put a stop to all his public engagements, including a popular daily radio show that he co-hosted for some 10 years. “Judging by the phone calls I am getting, something will happen soon,” he says.

“I have lived some 70 years. To think that every moment has to be good is out of balance. I believe that what has happened will surely have a positive influence so that, in the future, I will jump as high as I have come down,” Cho says. “There is nothing to be gained by being negative all the time.”

Cho is resigned to living with the stigma of the fraud controversy. “I think I will have to live the rest of my life as a fraudster. But I would be grateful to be known -- even if as a fraudster,” he says. “That is preferable to being ignored.”

Cho partly blames jealousy for his troubles: jealousy of his assistant who studied art yet did not achieve recognition, those who are jealous of his fame, his life.

“It is not as if I could suddenly become poor. I cannot seek another way. I pity myself in this way,” he says.

If he has a worry, it is about disappointing people. “I am concerned that people who come to my exhibition do not say, ‘There was a five-year-long court battle over such trite work?’” So he needs to strive to be better, he says.

Just before the interview comes to an end, Cho says, “By the way, I have founded a school of painting called Cho Young-nam’s Trot Movement. My art can be understood by everyone and is not difficult.”