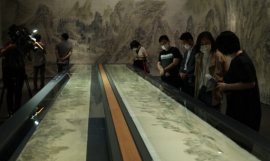 Participants of the “The New National Treasures of Korea” pre-opening press conference held on Monday view artifacts on display at the National Museum of Korea in Yongsan-gu, Seoul, on Monday. (Yonhap)

The National Museum of Korea is reopening on Wednesday with its largest-ever exhibition of national treasures.

The Cultural Heritage Administration and the National Museum of Korea have jointly organized “The New National Treasures of Korea” running through Sept. 27, showcasing cultural artifacts that were designated as treasures and National Treasures from 2017 to 2019. Online streaming of the exhibition will kick off on Tuesday, as originally planned before Sunday’s announcement of state-run cultural institutions’ reopening on Wednesday.

“This summer exhibition is the largest-ever public show of treasures and national treasures,” NMK Director-General Bae Ki-dong said during the conference held at the National Museum in Seoul on Monday.

The exhibition showcases a total of 196 items, including 83 of the 157 treasures and national treasures newly designated between 2017 and 2019. Structures and heavy or immovable artifacts are presented through video clips at the museum.

“Owners of the artifacts were happy to allow us to exhibit the items. We are not able to exhibit some of the paintings for the duration of the exhibition period, so we will replace them with other paintings. We recommend visitors visit at least twice to enjoy the different paintings,” Bae added.

“I especially want to express my gratitude toward the Kansong Art Museum and the Jogye Order of Korean Buddhism (for their cooperation),” head of CHA Chung Jae-suk said.

The 22 treasures collected by the Kansong Art Museum are on display at the exhibition. The treasures include “Portrait of Beauty” by Shin Yun-bok and “Mounted Scholar Listening to a Nightingale” by Kim Hong-do.

Kansong Chun Hyung-pil established the Kansong Art Museum in 1938, during the Japanese colonial era, to prevent precious cultural artifacts from being taken out of the country. More information about the collector is also included in the exhibition.

Also, nine Buddhist temples affiliated with the Jogye Order of Korean Buddhism contributed to the exhibition. 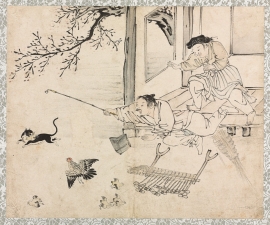 Pictured is a drawing of a cat snatching a chick, from Kim Deuk-sin’s “Album of Genre Paintings” from the Joseon era. The album is owned by the Kansong Art Museum. (CHA)

The second part showcases a diverse range of artifacts that offer a glimpse into traditional perspective on beauty. This part of the exhibition displays celadon pieces that show off pottery skills and the traditional focus on unpretentious beauty. The items in this section that come from Kansong Art Museum include Kim Deuk-sin‘s “Album of Genre Paintings” which shows images of the everyday lives of the people of the Joseon era.

The third section of the exhibition provides a space to explore artifacts related to Buddhism, which account for more than half of the state-designated treasures and national treasures.

“Sutra Box Inlaid with Mother-of-pearl,” which was used to store Buddhist scriptures, is on display here. The box was purchased from Japan and was donated to NMK in 2014 by the Friends of National Museum of Korea, a private group supporting the state-run museum. It was designated as Treasure No. 1,975. 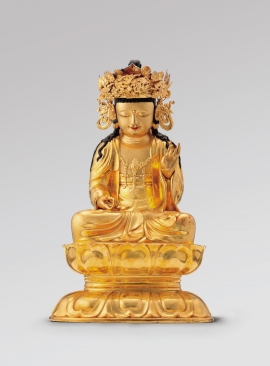 To comply with the Health Ministry’s rules on social distancing, the museum will only accept up to 200 visitors every two hours. Visitors are required to make online reservations in advance. The admission fee is 5,000 won.